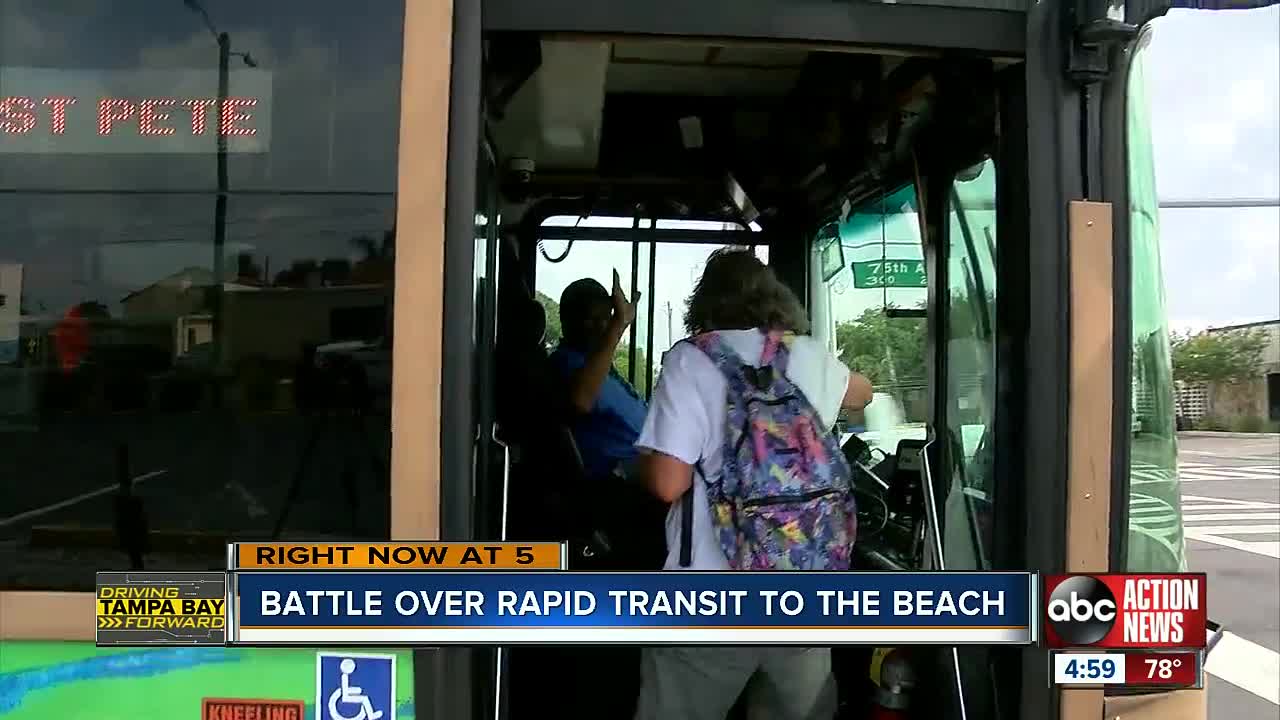 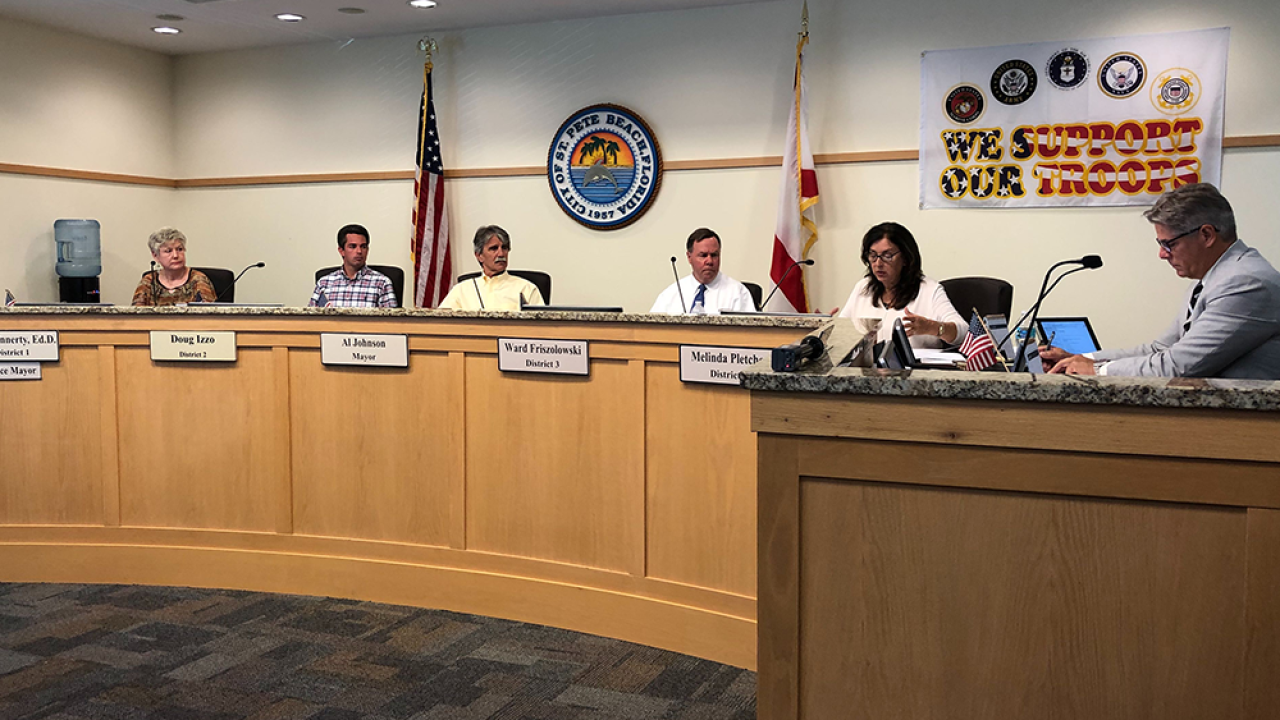 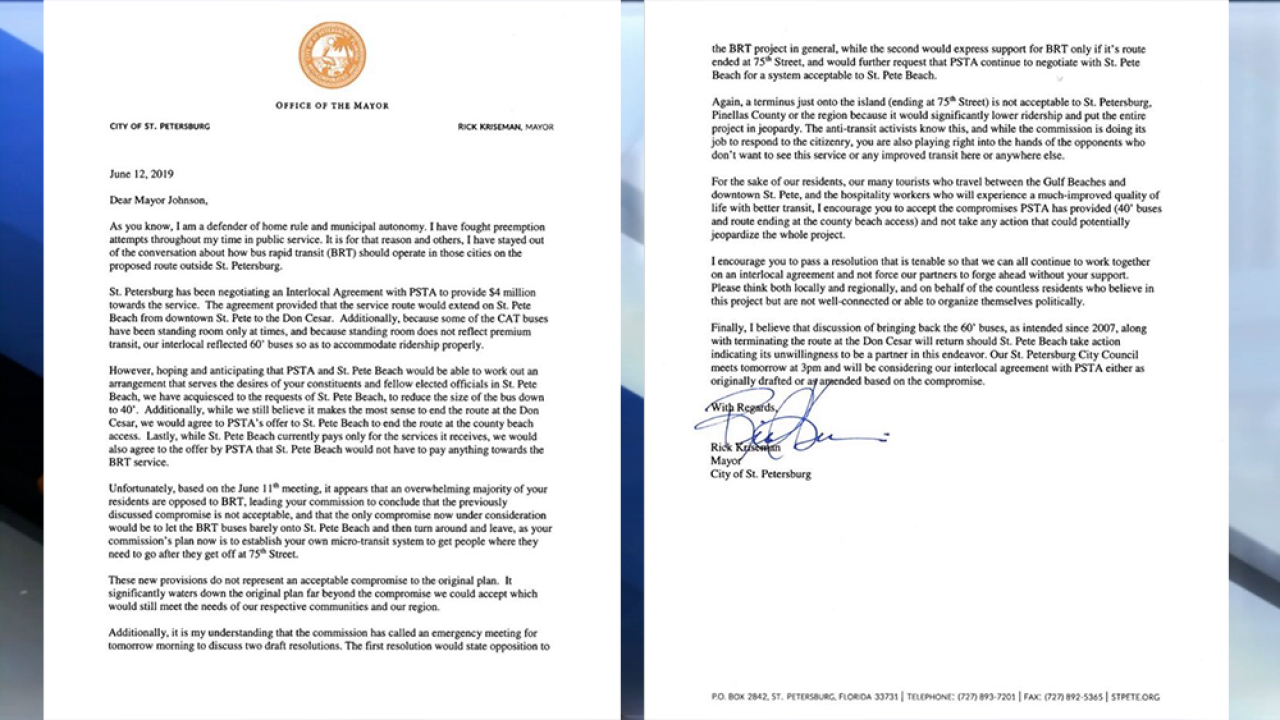 ST. PETERSBURG, Fla. — A battle is brewing between the City of St. Pete and the City of St. Pete Beach over a plan to add rapid bus transit connecting downtown St. Pete to the beaches. The Central Avenue Bus Rapid Transit (or BRT) project would cut the time it takes to get from downtown to the beach from 55 minutes to 35 minutes with the help of dedicated bus lanes, fewer stops and a pre-payment system.

Thursday morning, St. Pete Beach leaders voted to support the project but only with several caveats including urging the PSTA to use 40-foot buses instead of 60-foot buses, requiring the bus to turn around at the entrance to the beach community on 75th Avenue (from there St. Pete Beach would use trolleys to get people across the beach) instead of the Don Cesar Hotel. St. Pete Beach says Gulf Boulevard is simply too busy and too narrow to be used by 60-foot buses. They also say it's the only in and out street for residents to get off the peninsula.

The St. Pete Beach City Commission remains hostile towards the project, especially after receiving what some consider a heavy-handed letter Wednesday afternoon from St. Pete Mayor Rick Kriseman. In that letter, Kriseman writes, "These new provisions do not represent an acceptable compromise to the original plan. It significantly waters down the original plan far beyond the compromise we would accept. It would significantly lower ridership and put the entire project in jeopardy."

At Thursday's meeting, Commissioner Melinda Pletcher called Kriseman's letter "kind of a mafia move" adding that they are simply following the desire of the residents on St. Pete Beach which commissioners say oppose the project by 98.5% (according to emails received to beach community leaders).

According to census data compiled by Forward Pinellas, Within a half mile of the line, there are 50,000 jobs. 80% of workers employed on St. Pete Beach live outside of St. Pete Beach city limits. Forty percent of those workers live in St. Pete. PSTA says that's evidence of the need for the service for both visitors and residents alike.

St. Pete leaders are now threatening to move on with the project without St. Pete Beach’s approval.

The BRT line is expected to open to riders in late 2020/early 2021. It will cost an estimated $43.9 million dollars to complete, which includes $10.5 million from the Florida Department of Transportation, $7.6 million from the PSTA, and $4 million from the city of St. Pete. The Federal Transit Administration is expected to approve the final $21.8 million in funding through its Capital Investment Grant program later this year.