Neighborhood angered with proposal by St. Pete to buy church, replace it with low-income housing 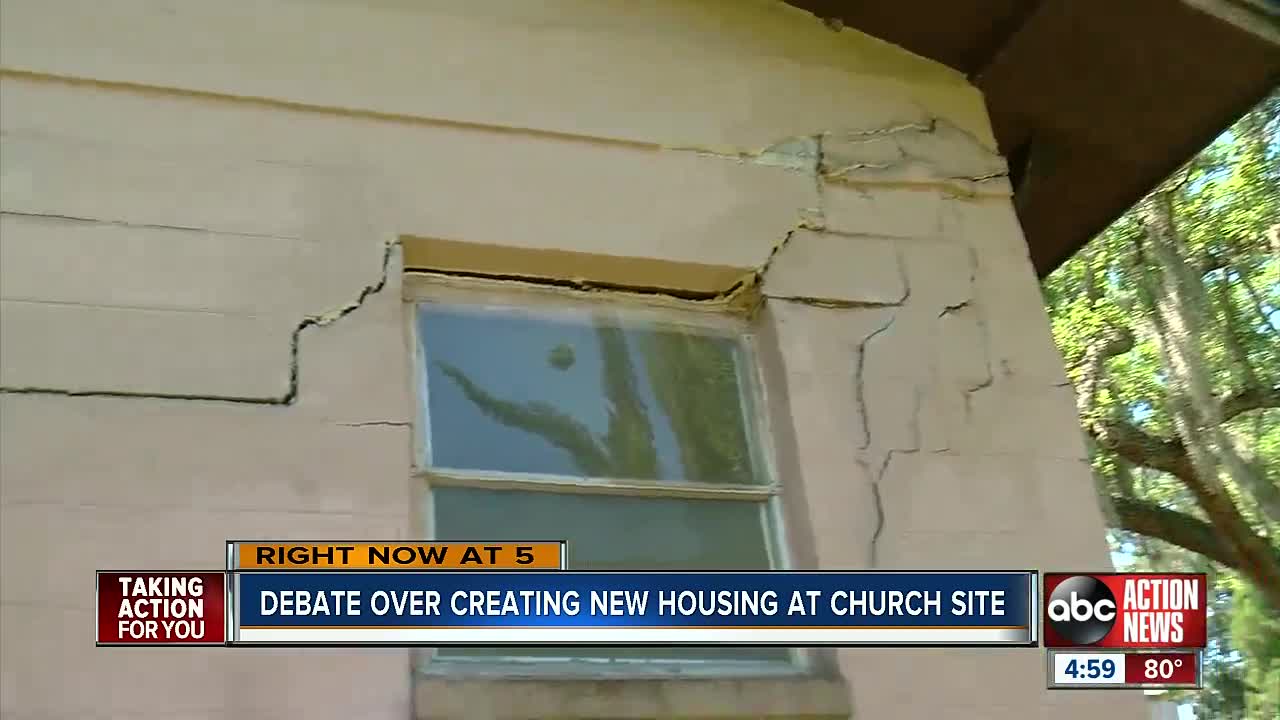 The City of St. Petersburg is considering buying Grace Connection Church and replacing it with low-income housing. ST. PETERSBURG, Fla. — The City of St. Petersburg is considering buying Grace Connection Church at Pasadena and replacing it with low-income housing.

The church is located at 635 64th St in St. Pete. Those living by the church in West St. Pete heard about the proposal via fliers left at their doors, and are angered and concerned about the future of their neighborhood.

The city’s plan would include demolishing the church and building up to 85 affordable housing units to the location.

Neighbors put out fliers of their own urging each other to voice their concerns to the city about this proposal. Some, we spoke with, vowed to move if the proposal goes through.

“I'm aggravated and frustrated more than anything that this can even be a possibility," said homeowner Zach Willis.

He tells ABC Action News they’re worried about taking a hit to their property values, an increase in crime and what they estimate to be an extra 400 people added to their streets.

“If this goes in our crime rate will probably sky rocket," said Willis, "We’ll have a tremendous amount of people. The infrastructure can’t handle it.”

"They are breaking weekly and we have a bunch of duct tape and bubble gum holding them together," said Pastor Kelley.

They can't even use certain portions of the church because they're not code compliant.

Kelley estimates the cost of repairing all the problems could be as high as a million dollars. Their congregation decided to stop putting band aids on this issue and instead sell the church and downsize. Kelley says they'd rather use their tithes for the betterment of the community and not for constant upkeep. Kelley describes the issues as "overwhelming" a "crushing burden."

He says they've entered into a contract with the city for the five acre property to the tune of $1.75 million. The city has not yet signed. The deal must be approved by City Council and the city can still back out of the deal within nine months. City Council is set to consider the contract and approve the deal on May 16th.

St. Petersburg has long had a problem with affordable housing. Some studies have found that by 2040 the city of St. Pete will have to build 2,500 new affordable units to house low income residents. As of April 2018, nearly 2,000 families in Pinellas County are on wait lists for affordable housing.

Over the past six years the average rent in Pinellas County has increased by 46% to $1,000 a month. As of June 2018, in St. Pete nearly 800 families have affordable housing vouchers but no place to move into. Grace Connection Church would be the first city purchase to tap into $15 million the city set aside from the Penny for Pinellas sales tax to specifically go toward affordable housing.

Robert Gerdes, the Neighborhood Affair Administrator for the city, believes this proposal would help tackle the affordable housing problem.

“The geographic characteristics of the property make it a good candidate for rezoning to multifamily and the fact that it’s such a strong neighborhood already we feel it can absorb a multi-family project without any adverse impacts," he said.

Pastor Kelley says while he's rooting for the deal to go through he's under no time pressure. He believes the decision is in God's hands.

“I just think we are delaying the inevitable the longer we wait—this [sale of the church] has to happen," said Kelley.

Tuesday April 23, city staff will host a community meeting at 6:30 p.m. for a presentation on the potential purchase. Concerned neighbors vow to voice their thoughts then.

This is a developing story.