The City of St. Petersburg sent a storm debris removal crew out early Friday to morning to find what caused localized flooding during a short period of rain this week.

ST. PETERSBURG, Fla. —The City of St. Petersburg sent a storm debris removal crew out early Friday morning to find what caused localized flooding during a short period of rain this week. 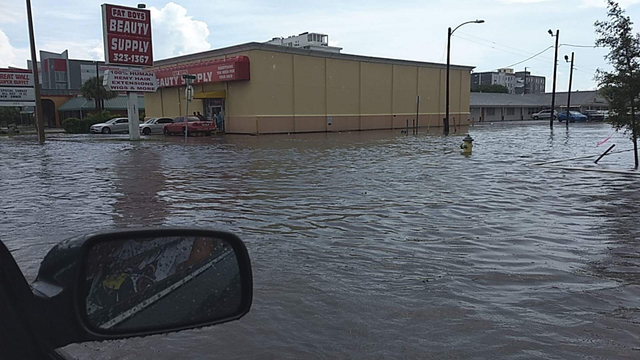 Eric Kim works at the beauty supply shop and tells us it only rained for 20 minutes on Wednesday before the street flooded and cars stalled out in the middle of the road.

Kim said he has to call the city every year about the flooding.

Bill Logan, spokesperson for St. Petersburg Public Works, tells us the stretch of 34th Street North is a state road.

He tells us FDOT asked the city to do contract work to see what may have caused the localized flooding.

A storm debris removal crew went inside the storm drain under 34th Street and found a large piece of wood, a garbage lid, and blankets causing a backup.

The four blankets that were pulled out of the drains were soaking wet with sediment -- making them weigh as much as 100 pounds.

Sam Sturgill, with the city, tells us the blankets can easily block a major portion of the drain and cause short-term, quick, localized flooding.

If you have a concern about a blocked storm drain near you, you can call the city's stormwater department at 727-892-5766.