The woman living inside a Pasco County home is scheduled to appear in court for what neighbors call a mini landfill.

PASCO COUNTY, Fla. — A woman facing code enforcement violations for debris piling up outside her Pasco County home plead no contest in court on Thursday.

Gard told the judge that the violation "has been taken care of."

ABC Action News was at the home earlier this week, where the trash was beginning to pile up already, one month after the county had someone with health services come and remove the debris.

We asked Gard why she told the judge that the trash was cleaned up when there was trash still outside, "that's the new trash," she replied.

Neighbors call Gard a squatter because the woman listed on the property records died five years ago.

Gard was listed on the death certificate though as an informant, meaning she can live there, even though the deed is not in her name. Gard also paid taxes up until 2016.

ABC Action News first did a story in May on the home in the Beacon Woods subdivision in Pasco County.

After our story, the county got with health services and organized a company to come and clean up the debris outside the home. 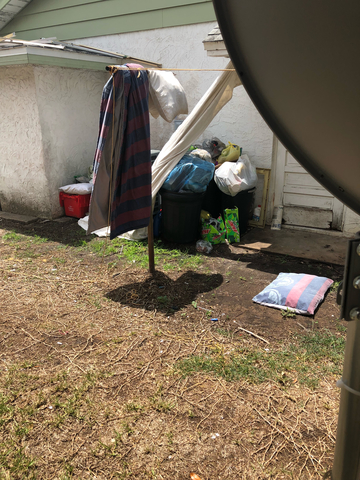 "We're worried what's going on inside that house," said Pam Roseman, a neighbor who lives nearby.

The person listed on the property records has been listed as deceased for five years. We spoke with the woman living inside the home last month and she tells us she was given the home from her friend who died.

ABC Action News put in a request with the Pasco County Appraiser's Office and found out Della Gard paid the taxes from 2011-2015.

Despite Gard not being listed on the property records, it's legal in Florida for her to pay the taxes.

Gard will appear before a judge on Thursday to face the code violations.

A county spokesperson said an officer with code enforcement was at the home on Monday to see if Gard has complied before her hearing.

We're told they are facing a violation for overgrown grass, and have 14 days to fix the violation.