The crash happened around 7:08 p.m. on County Road 54 near Chantel Drive in Zephyrhills and involved two cars.

According to troopers, Elvin Benitez, 30, was driving in the westbound lanes of Country Road 54 and Dennis Wilkes, 38, was traveling in the eastbound lanes. They say Benitez entered the eastbound lanes because he was trying to pass other traffic and ended up veering into the path of Wilkes' car which led to a head-on collision.

Two children, ages 6 and 11, were passengers in Benitez's car. They both have serious injuries and are at local hospitals.

Of the three people killed, two were a Polk County couple.

ABC Action News spoke with Dennis Wilkes' family who says Wilkes and Farmer were on the way home from a soccer game where Wilkes' son had just competed.

The road was the last place Betty Barrett Wilkes said she would expect her son to die.

That's because Wilkes was a long-time 'professional driver' as Betty put it.

Betty said he was a safe driver and drove trucks across the country for a living.

"You would never expect that he would be killed in a car accident," Barrett-Wilkes said.

Wilkes was a little brother, a father to two sons,  the life of the party and a 'big-tall' man, according to his family.

"His son Landon, and his son Tyler, were the lights of his life," his mother said.

Betty told ABC Action News that Wilkes was dating Farmer, who was killed alongside her son. She says she wonders why the couple was driving Farmer's car, saying if they would have taken his truck he may have survived the accident.

According to FHP the lane Benitez was passing in was a legal passing lane, when safe.

But during this time, it was pouring rain.

We asked FHP how common these types of accidents are and data shows eight people have lost their lives to improper passing in the Tampa Bay Area, just this year. Plus, improper passing is also to blame for more than 800 crashes that have happened this year, almost all involving other vehicles.

"It’s not worth it, I’m not in that big of a hurry, ever," Wilkes mother said.

ABC Action News is working to find out the status of the two children involved in the accident. At last check, FHP says the two were severely injured. 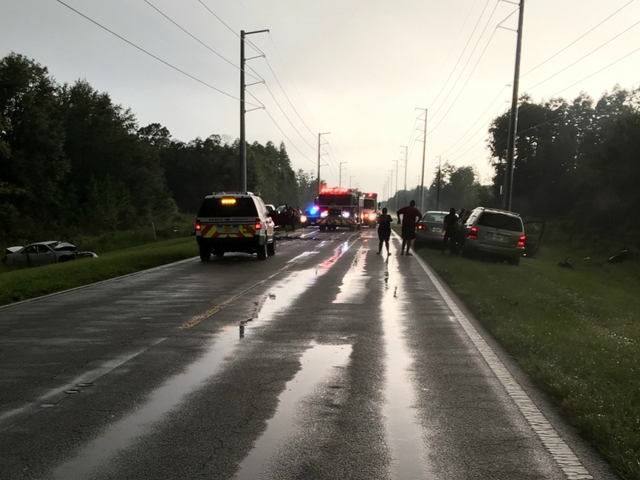