Construction to be completed in 12-15 months

PASCO CO, Fla — Your traffic nightmare at the I-75 and State Road 56 intersection in Pasco County might be coming to an end.

Construction is scheduled to start later this fall on Pasco's new diverging diamond interchange. Once it’s completed traffic will basically crisscross on both sides of State Road 56, causing the on and off ramps of I-75 to no longer get backed up.

“It eliminates contact points between cars traveling in opposite directions, and left turns crossing over traffic,” said Casper. 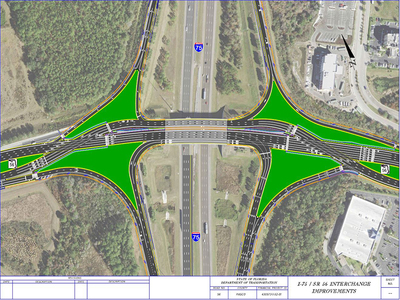 This will be the second diverging diamond in the state. The first one was put in Sarasota last year. According to the Department of Transportation it is working great, and has reduced the traffic back up on the University Parkway along the Sarasota and Manatee County line. There’s 20 of these traffic patterns in the country and Casper has worked on two of them.

“It really is great,” he said. “We’ll be able to get so many more cars moving through that intersection than ever before.”

Drivers we spoke to in the area said they are willing to give the new interchange a chance because anything is better than sitting in traffic for hours.

“Yea anything will be a blessing for the area,” said Steve Hand who lives off of State Road 56, and uses the roadway everyday. “There’s just so many homes going in here so there’s just more and more cars coming everyday.”

The project is estimated to cost $37.4 million. The original price was $21.1 million. FDOT’s spokesperson, Kris Carson, said it’s normal for the cost to fluctuate during construction “as they [engineers] refine all the quantities and estimates for materials."

State and federal funds are paying for the project.

“I’m okay with the cost,” said Hand. “As long as they know it works elsewhere, and they’re not just throwing money at something that won’t work, I’m okay with that.”

Casper says construction has already started, and is expected to take about 12 to 15 more months before it’s completed.