A large hole that opened up in a Pasco County neighborhood has forced two families to evacuate their homes.

PASCO COUNTY, Fla. — Two New Port Richey homes are still marked unsafe after a depression opened up between them.

Officials are calling the hole a depression and said it opened in a gated community between two homes on Dorian Ct. in New Port Richey; which is just west of River Ridge Middle School and High School.

No one was home in either of the houses affected and no one will be living in them anytime soon.

Pasco County officials aren’t yet calling it a sinkhole in the River Ridge subdivision, but they say this depression did have a little bit of movement this morning. 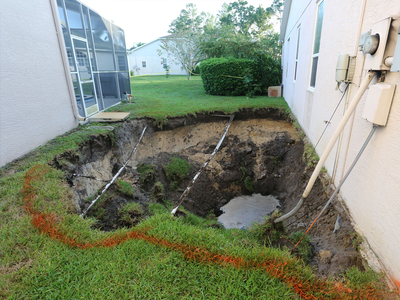 A closer look shows the ground gave way underneath one of the homes. Water pipes are still intact.

“Both houses will remain not occupiable. The power was pulled from both structures just to ensure safety for all of our citizens,” said Deputy Building Official Anthony Mastracchio.

While officials say the depression is about 40 feet across, it could be much bigger because they found another hole on the back patio that took several pavers with it.

“We don’t know if that’s just a washout from all the rain we’ve had or they are truly connected,” said Assistant County Administrator Kevin Guthrie.

If they are connected, that would make the depression about 100 feet wide.

Unlike the massive sinkhole in Land O’Lakes, this situation is on private property, so it will be up to the homeowners to find a solution.

One of the homeowners was out of state and flew back today to check on the damage.

Officials say despite how bad it looks, there is no real damage to the structure of either house.

If you're in the market to buy a home or just need peace of mind on your current home, you can refer to this map of all recorded sinkhole activity in our area. Just search for an address in the upper left-hand corner. From there, you can zoom out on the map and see where sinkholes have been recorded nearby. Please note, the website works best on Internet Explorer.