FHP: 17YO driver killed after getting hit by man who ran a red light in Pasco County

Copyright 2018 Scripps Media, Inc. All rights reserved. This material may not be published, broadcast, rewritten, or redistributed.
Pasco County Schools

Investigators said her vehicle was t-boned while driving across the intersection of Duck Slough Boulevard by another SUV that ran the red light while traveling eastbound on SR 54.

We are sad to report the tragic death of one of our students, Lillia Morris, an 11th grader, who died in an automobile accident yesterday. We are grieving the loss of this fine student and would like to offer our heartfelt condolences to the friends and family of Lillia. pic.twitter.com/E5RMPVCiWb

The crash happened around 2:33 p.m. Tuesday afternoon. The impact spinning Morris' car into the median of the opposite turn lane.

Florida Highway Patrol says the man behind the wheel was Roy Rimmer, 54, of Tampa, and a spokesperson for the department says "charges are pending."

A man who deputies say was a passenger in Rimmer's vehicle ran away after the crash.

That passenger, Brandon Windom, 27, was later found and charged with drug possession and fleeing from authorities. According to FHP, Windom admitted to running so he could hide drugs and drug paraphernalia.

This is a photo snapped by a passing motorist of the man troopers identified as Windom leaving the scene. 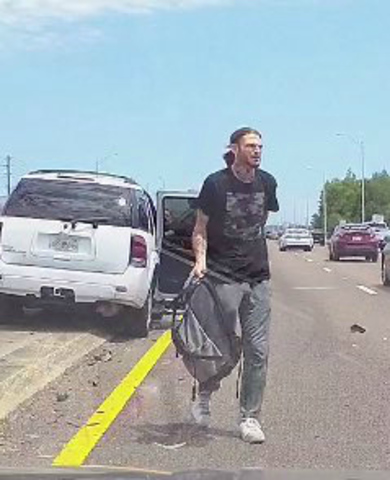 "This was not right," Breanna Hackney said.  Hackney works at Jersey Mikes and heard the crash. Her manager ran to help.

"My manager actually tried to stop him from running and he pushed her and continued to run off," Hackney said. "She was really shaken up after what she saw.  She said that his head was all bloody and that he said that he needed to go somewhere that he couldn’t be here. She said 'no you need to stay this is serious someone just passed away.' He apparently pushed past her and continued to run away."

Windom was located and detained just after 7 p.m.

According to court records, Windom is a habitual traffic offender with multiple DUI's and driving on a suspended license.