In a Pinellas County courtroom Thursday, the defense says they are not disputing that Marco Parilla Jr. fired the shot that killed Officer Charles Kondek.

But they do want to show what led him to that violent night. 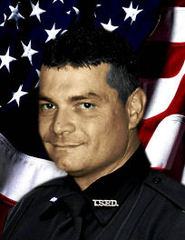 Hellickson told the jury one of the shots hit the father of six just above his bullet proof vest.

Kondek came to the Glen Eureka apartments in Tarpon Springs on December 21, 2014, checking on a noise complaint.

Prosecutors say Parilla who was on probation at the time, had gone there looking for a former roommate he thought snitched on him, leading to his arrest.

A witness testified Parilla told him that night “he was in the mood to kill someone.”

When Kondek showed up, Parilla turned the gun on him.

“He pulls out his gun from the back pocket. And then they start shooting at each other,” said Parilla’s friend Evelyn Santiago.

“Does Marco actually shoot through the car where you are at?” she was asked.

“Well yea, they shot through the car. Cause when I ducked down all I hear is glass,” she answered.

“No one is going to try and excuse what he did; to justify it,” said defense attorney Amanda Powers Sellers.

Parilla’s defense is trying to convince the jury not to sentence him to death.

They plan on going into his troubled childhood that included abuse from his mother.

The jury also saw dashcam video from another Tarpon Springs officer, showing Parilla drive away in an attempt to escape.

But he eventually crashed nearby and was arrested.

You can also hear the frantic radio calls as officers realize one of their own was down.

Under a new law, the jury will have to be unanimous in voting for the death penalty.

Parilla will have a full sentencing trial with several days of testimony on each side. During the sentencing, a jury will decide if he will face life in prison or be condemned to death row. Under a new Florida law passed last year, a death penalty conviction must be unanimous by all members of the jury.

The jury selection was completed on Wednesday.

According to Tarpon Springs police, Kondek was responding to a noise complaint call at 199 Grand Boulevard. Residents of an apartment complex had called police because a man who had been knocking on apartment doors at approximately 2:00 a.m. When Officer Kondek arrived at the scene he was shot and killed by Parilla.

Parilla then fled in a vehicle but was apprehended a short distance away after crashing into a utility pole and parked car.

He is survived by his wife and five children.