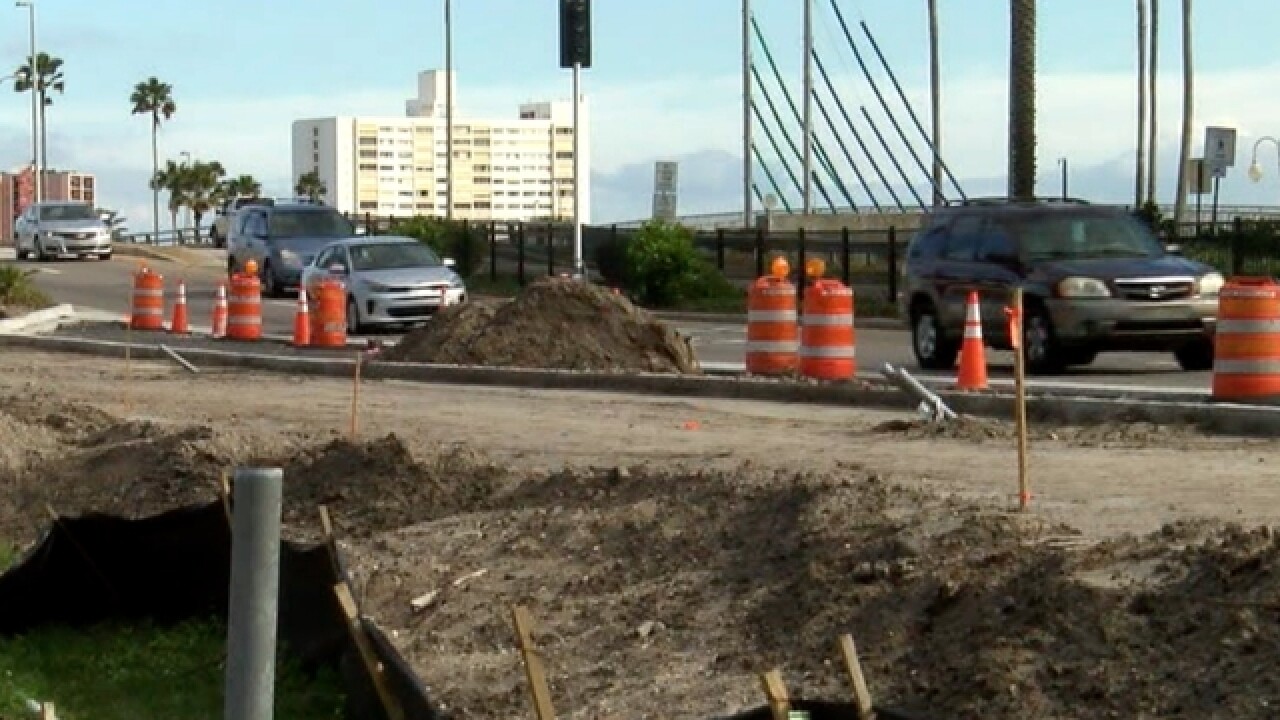 CLEARWATER BEACH, Fla. -- It is a $9 million project that planners hope will ease congestion for people heading to Clearwater Beach. But some neighbors are concerned it could make traffic worse.

Dave Spath is living the dream. For the past three years he has worked at Barefoot Bay Motel. He loves the area but can rarely say he enjoys the traffic.

"I see tourists, very frustrated that it's taken them a very long time to get down the causeway," Spath said.

Spath sees accidents, too. The big problems is drivers who do not understand how Clearwater Beach's roundabout works. It is why he is open to ideas on how to fix the problem.

The latest plan comes from the City of Clearwater and several agencies including the Pinellas Suncoast Transit Authority and Forward Pinellas.

The idea is to finish a bus pull-off under construction by mid-February. While the pull-off is a completely separate project, Whit Blanton, the Executive Director of Forward Pinellas, says it would act as a focal point for the next project. That plan would add traffic lights to parts of Causeway Boulevard and a separate lane for buses and emergency vehicles.

The hope is the separate lanes for buses and cars will mean fewer drivers clogging up roads and parking spots and more folks are sitting on the city's award-winning beach.

The plan would see people park in Downtown Clearwater, load up their things and take the bus over the intercoastal waterway to the beach. The bus would drop them off right before the roundabout, so clearly they would have to be okay with a little walking.

Spath is hoping the plan succeeds.

"We think it's good for us, and the little motel's right here," Spath said. "Who doesn't like having a bus service drop off your tourists 50 feet from the front door?"

But the Clearwater Beach Chamber of Commerce is concerned the additional traffic lights may cause even more congestion because the Jolly Trolly and Clearwater Ferry are already easing traffic.

Spath says people attempt to hand him cash for a spot in Barefoot Bay Motel's parking lot every single weekend after sitting in traffic for hours. Each time he has to turn them down.

"You can just see the frustration boiling over at this point and these are people that have come to Clearwater Beach, not locals [but] tourists, that have come and their initial experience, their first impression is, oh my god, where am I going to park?" said Spath.

Another part of the plan is adding a bus to carry people from Tampa International Airport to the beach every thirty minutes, seven days a week.

Forward Pinellas says none of the plans are finalized. The agency will be meeting with the Clearwater Beach Chamber on Wednesday to make sure there is an open line of communication and transparency as they discuss viable options.

You can go to the meeting in the Clearwater Courthouse's 5th Floor Assembly Room at 315 Court Street starting at 1:00 p.m.