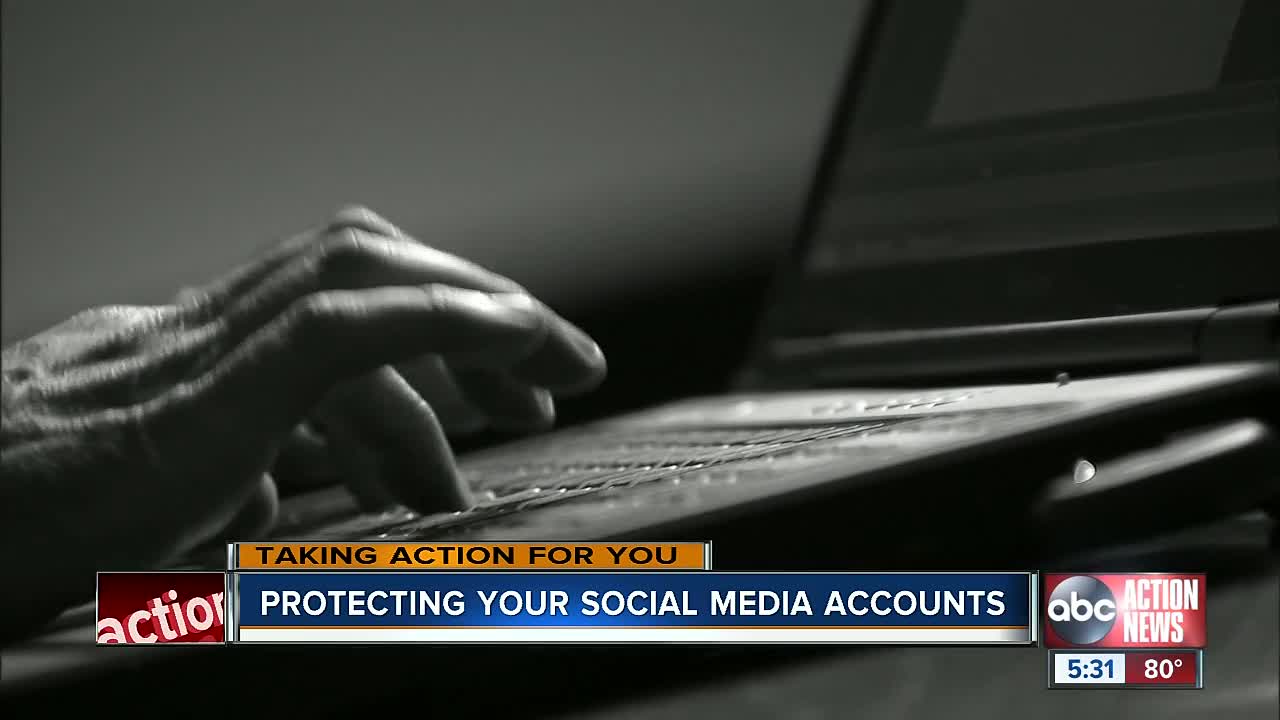 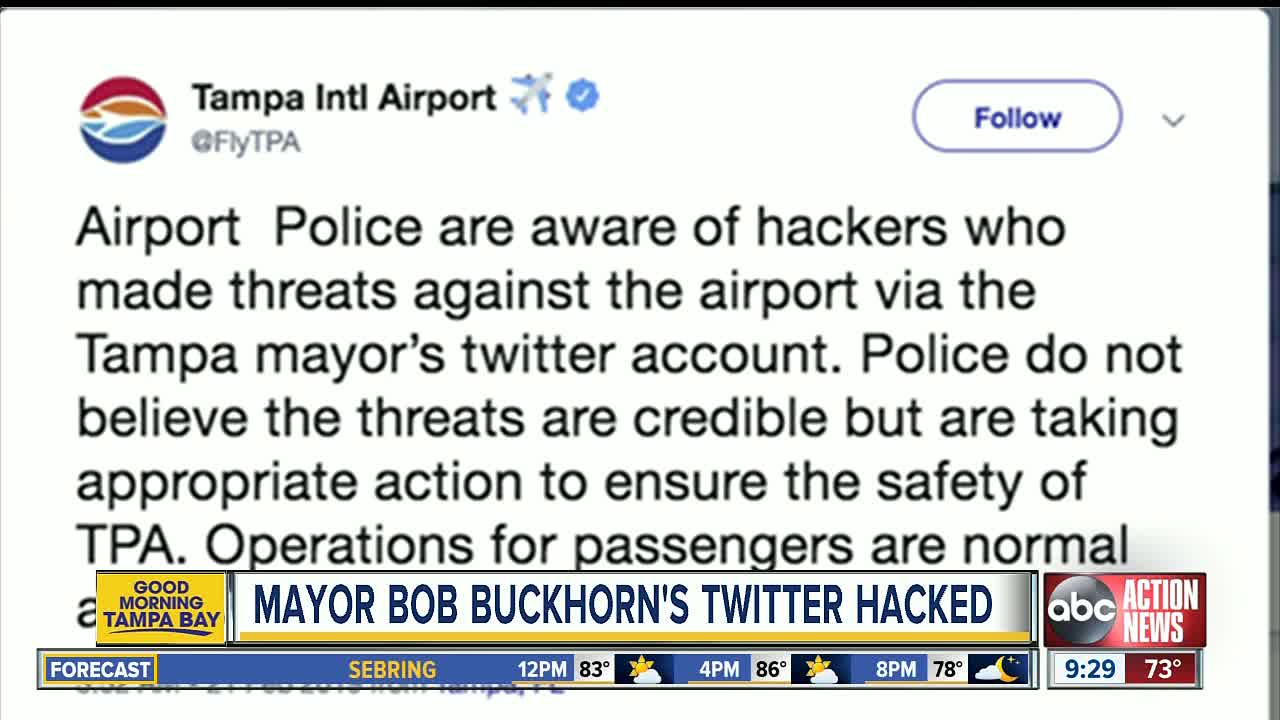 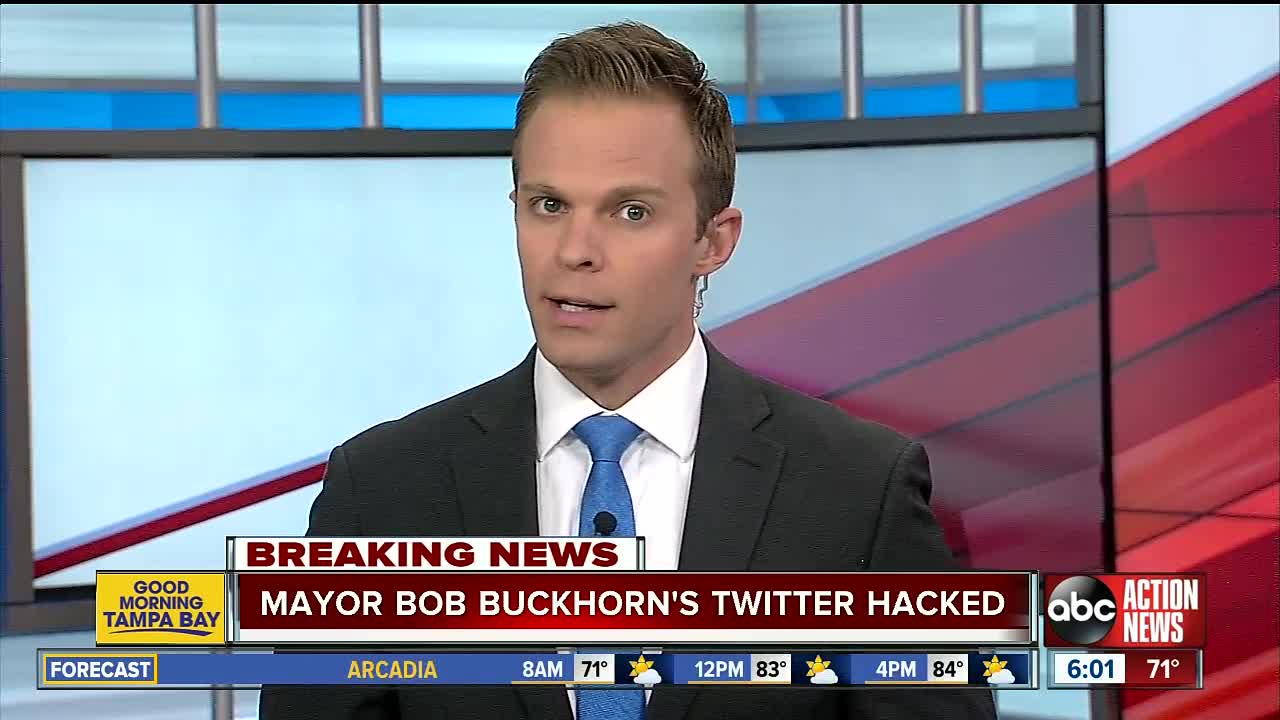 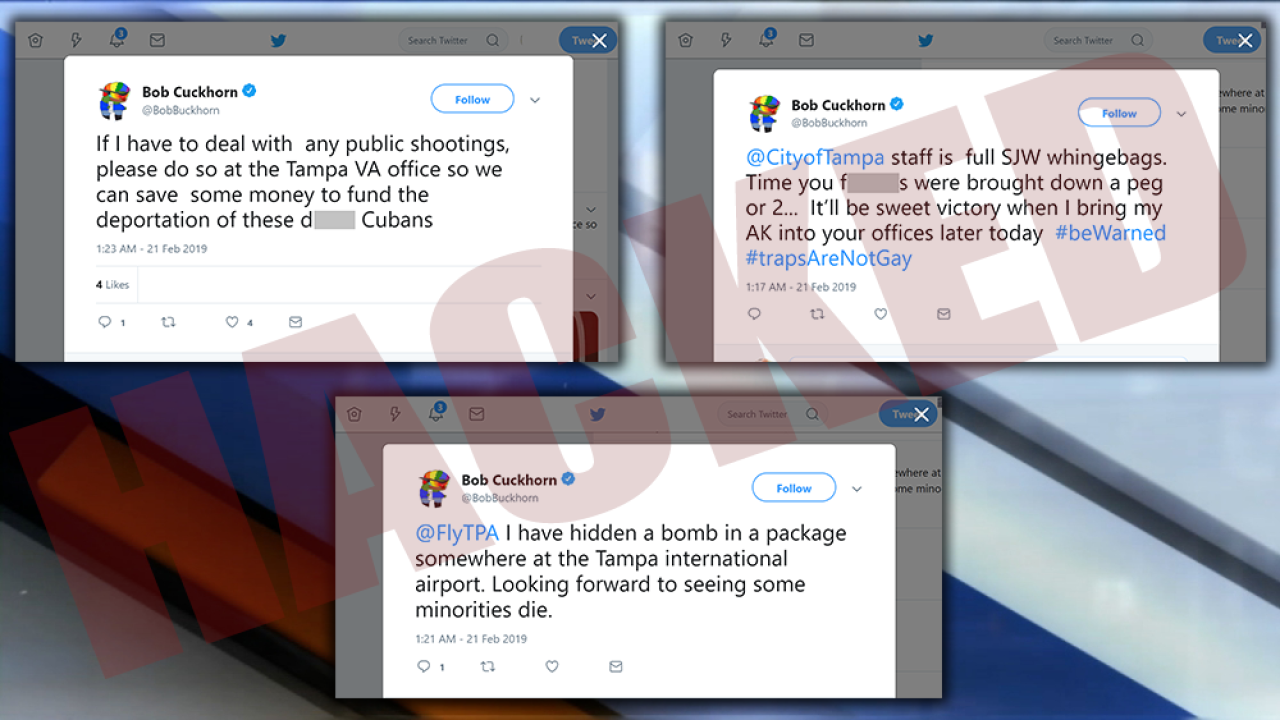 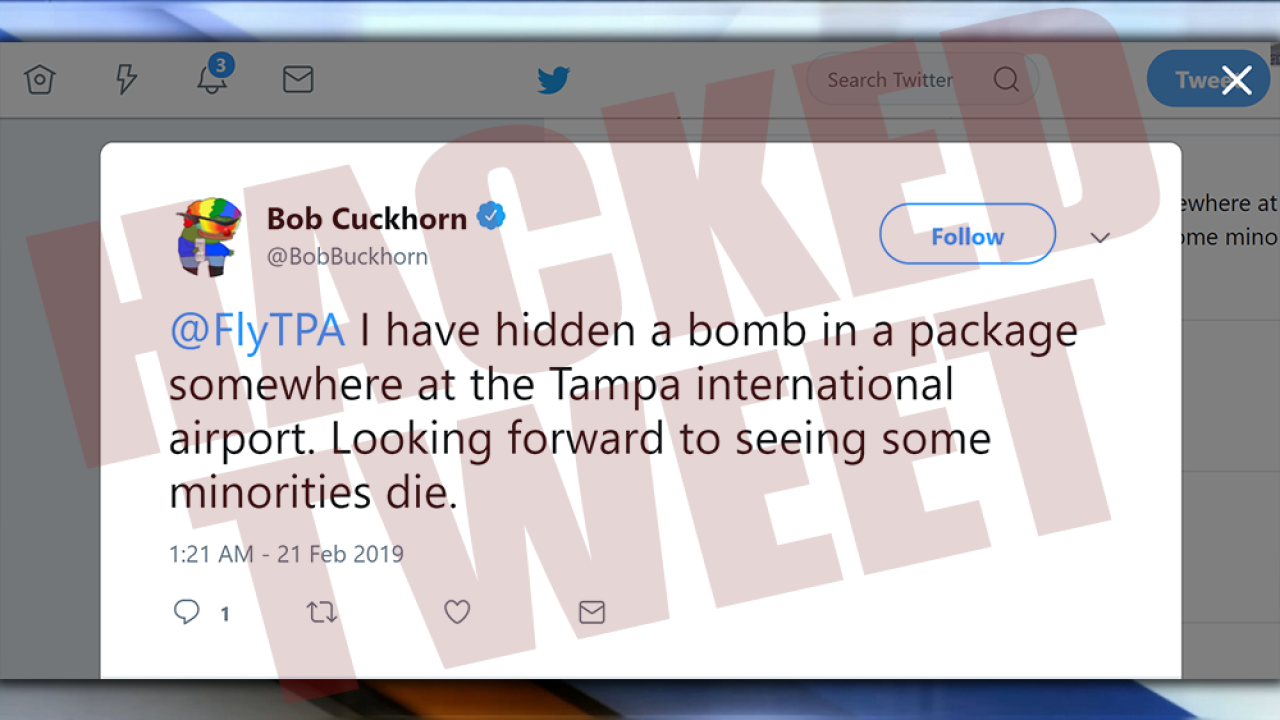 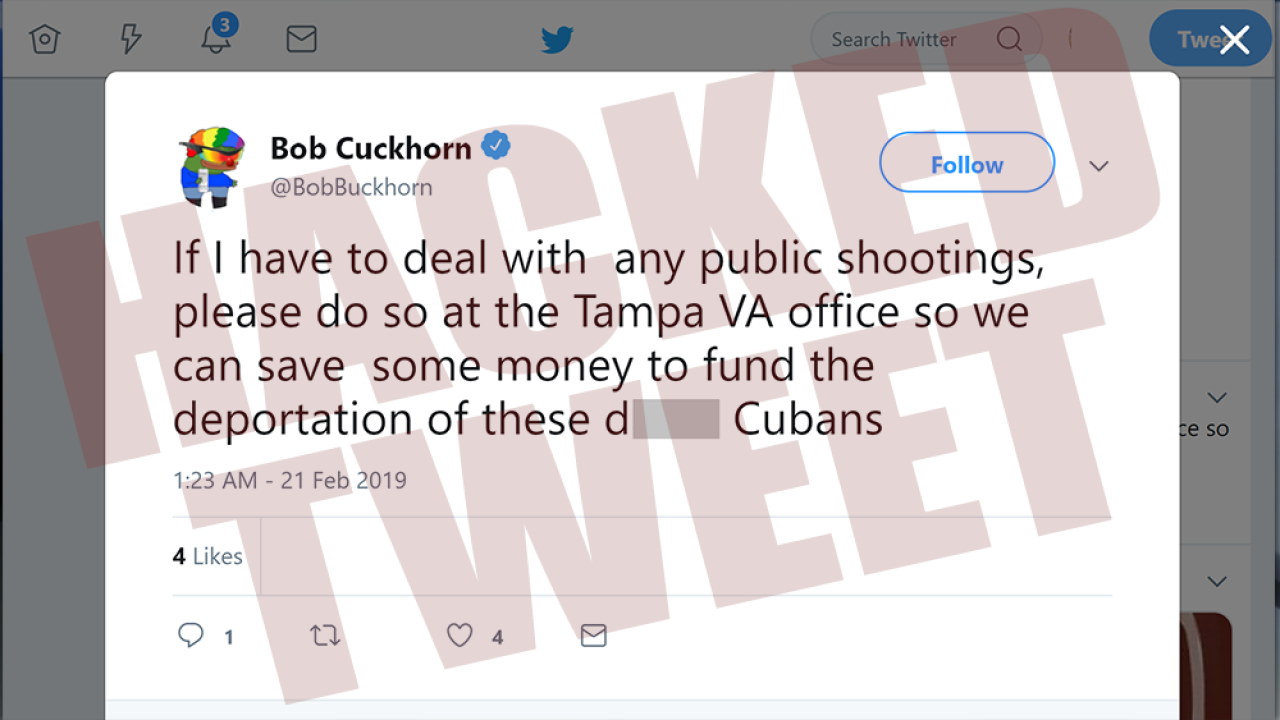 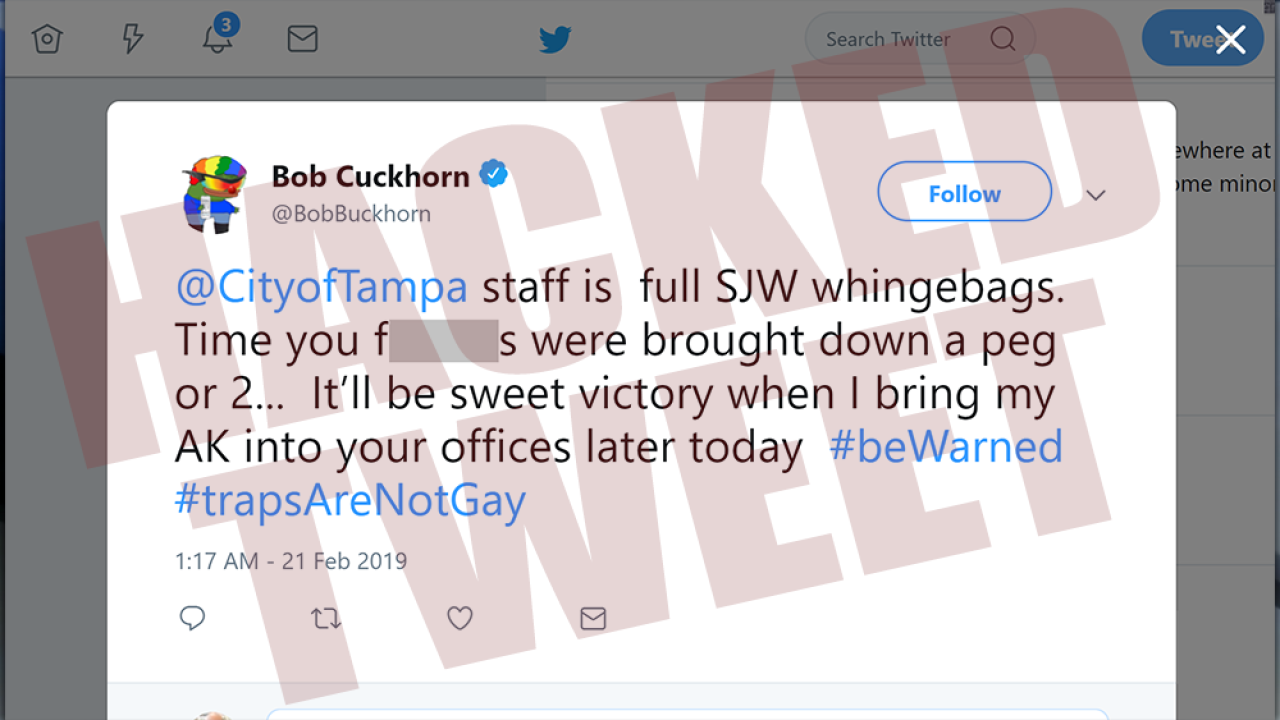 Among the tweets, the hackers threatened the City of Tampa staff, Tampa International Airport and the Tampa VA office.

The Tampa Police Department said the threats are not credible and that detectives are working to determine who is behind the "despicable messages." They also said they are working with the FBI and are following up on leads.

Airport Police are aware of hackers who made threats against the airport via the Tampa mayor’s twitter account. Police do not believe the threats are credible but are taking appropriate action to ensure the safety of TPA. Operations for passengers are normal at this time.

The Communications Director for the Mayor and the City of Tampa released the following statement after the incident:

Earlier this morning we noticed someone hacked Mayor Buckhorn's twitter account, this was clearly not Mayor Buckhorn. Upon noticing the hack we immediately began investigating these reprehensible tweets. We will work with our Tampa Police Department as well as all investigators to figure out how this breach was made. We urge residents to change their passwords and continue to alert officials when they see an unlikely change in account activity. We are working with law enforcement to investigate all threats made by this hack.

Mayor Buckhorn was made aware of the hack. He tweeted Thursday, "Thank you all for working with us through this process and a special thanks to @TwitterGov for expediting."

ABC Action News spoke with the Founder and CEO of KnowBe4 about online security. He said consumers need to look for ways to protect their online accounts.

"An 8 character password can be hacked in less than 2 and a half hours," Stu Sjouwerman said.

The company suggests people use stronger passwords, a phrase instead of a word, misspell a word and enable two factor authentication.

"Lesson learned. Use very strong passwords that are hard to guess and a different password for every website that you go to," Sjouwerman said.

ABC Action News also spoke with Kevin Mitnick. He's the Chief Hacking Officer at KnowBe4. Mitnick said he went to prison for 5 years in the past and says now he is a hacker who teaches businesses, schools and people ways they can prevent it from happening to them.

"Hacking happens all the time," he said.