Swap guns for cash through the Hillsborough County Sheriff's Office

HILLSBOROUGH COUNTY, Fla. — Tampa Bay Area residents who have old, unused or unwanted guns can swap them for cash through the Hillsborough County Sheriff's Office.

The anonymous event will be a drive-thru service. Residents will stay in their vehicles, a deputy will approach and take the gun in exchange for $50 in cash. No ID is required, according to the sheriff's office. 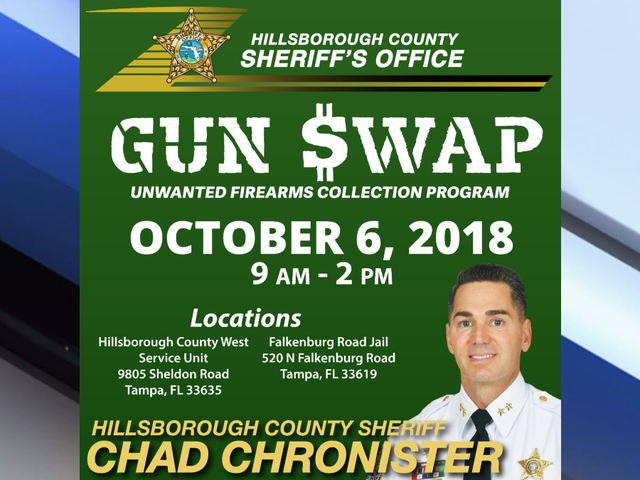 "Our last Gun Swap was in 2013. Your response was amazing, and with more than 2,500 firearms exchanged, it still stands as one of the nation's most successful swap for cash events," said Sheriff Chad Chronister.

On February 2, 2013, deputies collected 2,541 firearms, including at least 11 stolen guns and hundreds of illegal weapons. At every one of the five locations, there were lines of cars to get into the event. Deputies distributed $55,000 in cash within an hour into the event.

"Please take advantage of this great program to properly dispose of that unwanted handgun or long gun. Eliminate the chance that firearm is lost or stolen and ends up in the wrong hands. Put it in our hands and get some money to boot," Sheriff Chronister added.

Deputies are only accepting unloaded firearms. Other items, such as BB guns, will not be accepted. Collected guns will be destroyed.