A study by the New York University Law School reveals the majority of people strongly approve of the Tampa Police Department, but there appears to be a gap between two groups surveyed.

A study by the New York University Law School reveals the majority of people strongly approve of the Tampa Police Department, but there appears to be a gap between two groups surveyed.

The survey released this week shows out of the 600 anonymous people surveyed almost 70% of people approve of Tampa's police department.

However, it's when you break down demographics that show African-Americans and people with lower incomes have lower ratings or interactions with police.

The results of the survey have been given to the Tampa Citizens Review Board (CRB) to review but the main issues of importance from the community survey include:

The survey is recommended to help highlight some of the important issues people in the community would like addressed.

Reva Iman is the Robles Park Association President, she tells ABC Action News police are getting better in the high crime area.

She attributes that to officers interacting with people who live there.

"Officers don't just drive through anymore," said Iman. "Now they come over and they get out of their car and try to build a relationship."

A big request in the survey was people said the department is good with engaging the community, but they want more ways to give opinions and provide input with the department.

As far as looking at who approves of TPD and how they do their job, almost 70% approve.

But, when you break it down by race 43% of African American males disapprove. 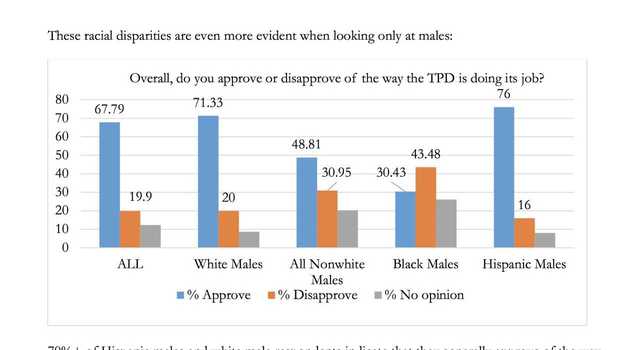 The survey was given to the Tampa Bay community from the end of October to mid-March. The CRB and Policing Project reached out to more than 150 Tampa-area businesses, city agencies, academic institutions and religious and civil rights groups.

We're told the police chief has received and reviewed the findings with the Policing Project out of NYU School of Law.

The Tampa Citizens Review Board will have their next public meeting at City Hall on May 22, where they will begin discussing in further details the findings.

They will eventually ask the department for certain changes to improve the public's view on policies and practices within the department.

For the full survey, go here.