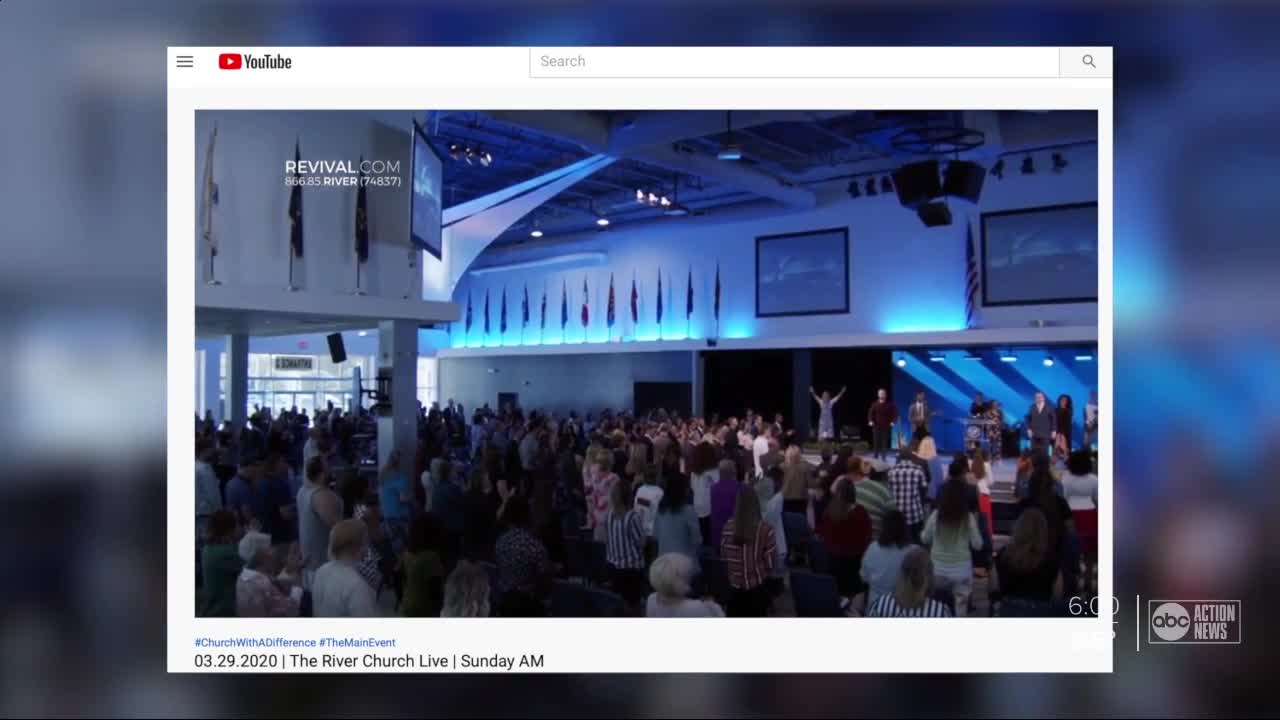 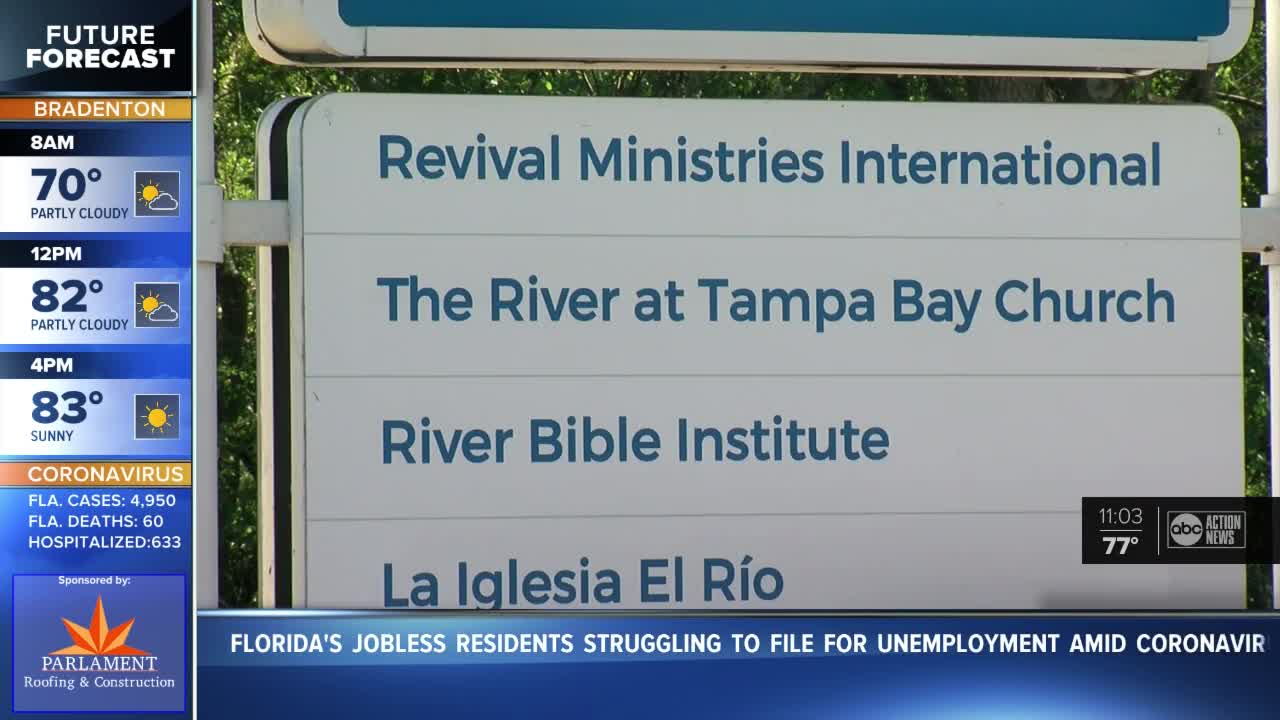 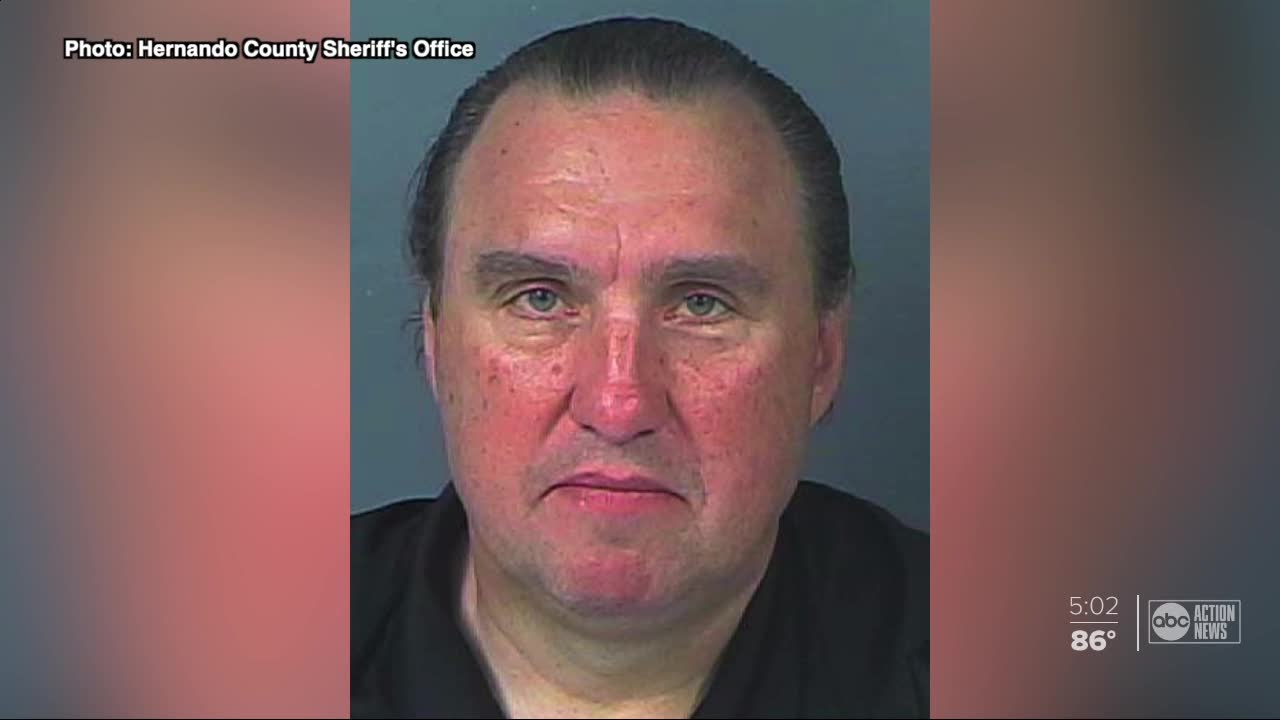 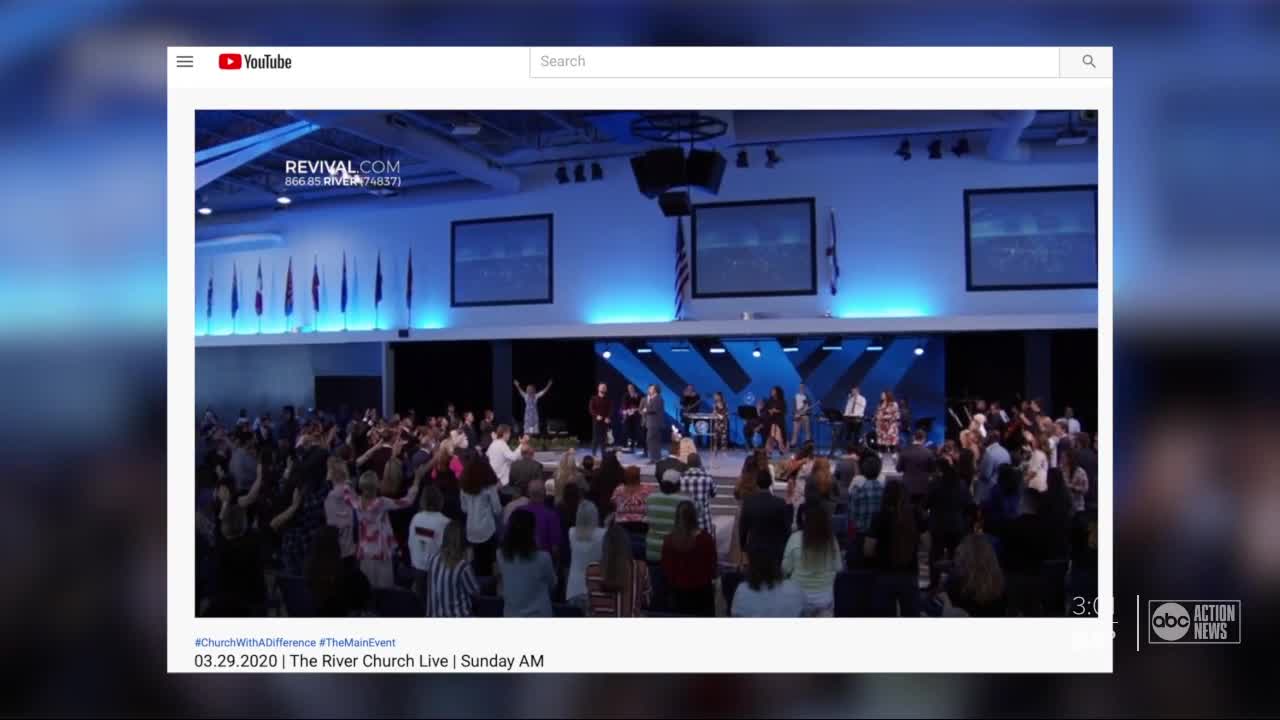 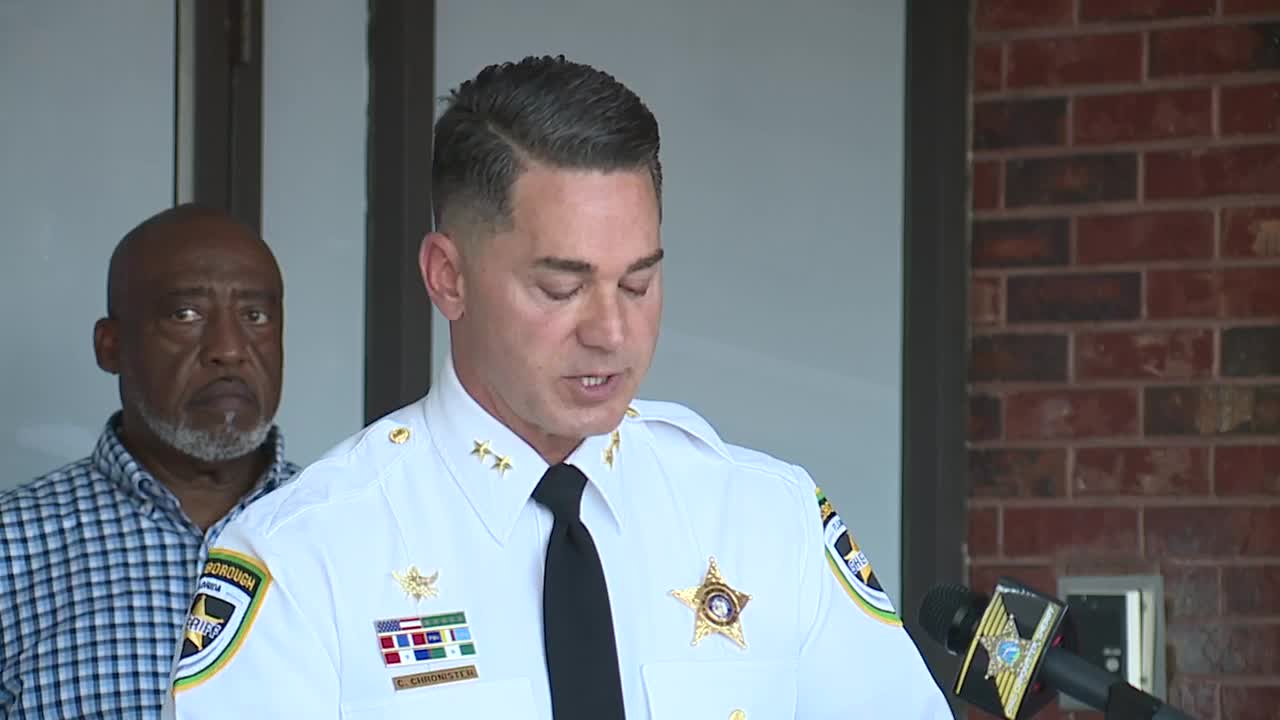 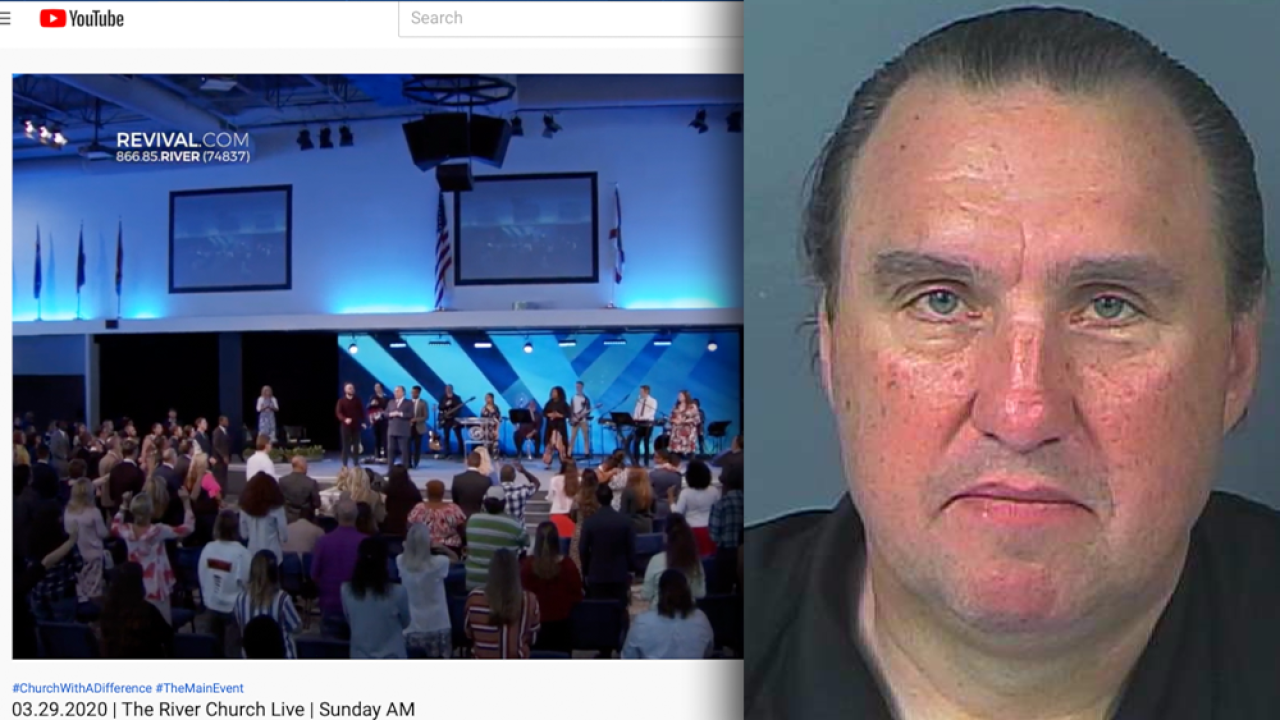 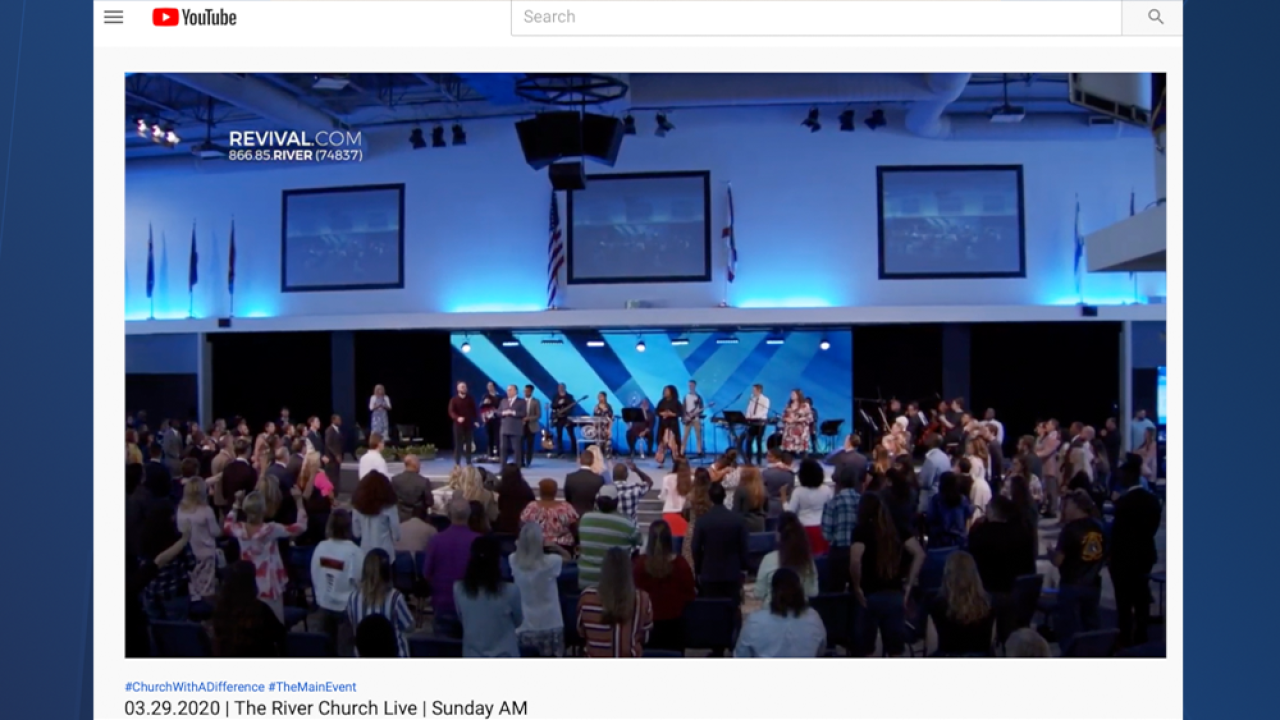 TAMPA, Fla. — Hillsborough County Sheriff Chad Chronister announced on Monday that the pastor of a Tampa church has been arrested for holding large services despite a "safer-at-home" order that's currently in place in the county.

The pastor, Dr. Rodney Howard-Browne, is charged with unlawful assembly and violation of a public health emergency order.

"Last night I made the decision to seek an arrest warrant for the pastor of a local church who intentionally and repeatedly chose to disregard the orders set in place by our president, our governor, the CDC and the Hillsborough County Emergency Policy Group," Chronister said.

The River at Tampa Bay Church held services late Sunday morning at its Tampa location and posted a live stream of it to their YouTube page. The sheriff's office confirmed after the Monday press conference the pastor was arrested.

The YouTube video shows dozens of people packed inside the church, shoulder-to-shoulder, not abiding by the six-foot social distancing guidelines set by the CDC, or the safer-at-home order put in place by Hillsborough County.

Chronister said the sheriff's office had been in contact with leaders at the church since Friday after getting an anonymous tip that the pastor, Dr. Howard-Browne refused requests to temporarily stop the large services.

"His reckless disregard for human life put hundreds of people in his congregation at risk, and thousands of residents who may interact with them this week in danger," Chronister said.

According to Chronister, the pastor encouraged his congregation to meet at the church and even arranged bus transportation so people could attend.

The sheriff says the pastor's actions were in direct violation of the "safer-at-home" order in place in Hillsborough County and an executive order that limits gatherings of more than 10 people. That order includes faith-based gatherings.

Chronister said that on Friday and again on Sunday, sheriff's office officials spoke with attorney representing the church.

Members of the sheriff's office command staff went to the church to speak to the pastor, who did not make himself available, according to Chronister. The officials were advised by church leaders and the pastor's legal staff that they were not canceling the Sunday service, according to the sheriff.

"They encouraged people to come and gather at church," Chronister said. "They even provided bus transportation for the services."

Hillsborough County Commissioner Pat Kemp caught word of the morning service, and she tried to put an end to it.

“I immediately tried to contact Hillsborough County Sheriff Chad Chronister and he immediately got back to me and just said, ‘We’re on it’,” said Kemp.

The church released a statement saying they should be considered an “essential service," just like hospitals and police are.

The Sheriff's Office sent deputies to the church Sunday evening and even put up a sign asking people to follow social distancing guidelines. Still, a lot of cars filled the church parking lot Sunday evening.

Our ABC Action News legal analyst said under the Hillsborough County “safer-at-home” order, the sheriff has the rights to take legal action.

“It’s not a matter of leaving the doors open, but if he holds a service and he has a meeting of any kind where people are listening to him, then he is responsible for them being there. They absolutely can arrest him,” said Attorney Jeff Swartz.

Swartz said this is not a matter of first amendment rights, which allow people to practice whichever religion they choose.

The Hillsborough County Sheriff’s Office, so far, has not said whether this church will continue services and released the following statement Sunday night:

The Sheriff’s Office has advised church leaders of the danger they are putting themselves and their congregation in by not maintaining appropriate social distancing at a time when COVID-19 cases are unfortunately still on the rise in Hillsborough County.

Attorneys for the church are in direct contact with HCSO attorneys. We are working to determine how compliance can be achieved to keep the public safe under these extraordinary conditions, and we hope to resolve this matter quickly.