UPDATE | Zoe Warren has been found safe and unharmed by TPD detectives. Her father Jamie Warren was also located and is in TPD custody. Detectives learned while she was missing, Zoe was in contact with her father. He has not yet been charged, but he faces several charges of possession of child pornography.

TAMPA, Fla. — Tampa Police are searching for a 15-year-old girl who has been missing since Monday morning.

Her case was updated to a missing child alert Tuesday afternoon.

TPD says that missing teen, Zoe Warren, 15, lives in the Plant City area, but was last seen at about 8 a.m. Monday at the PACE Center for Girls at 1933 E. Hillsborough Ave. Though she was seen at the PACE Center where she attends school, she did not attend classes on Monday.

Police say that Warren is not a habitual runaway and is considered missing and endangered.

Warren is approximately 5 feet tall, about 100 pounds, with dark brown hair. She was last seen wearing a black and white jacket with a Mountain Dew logo, blue jeans, and white slip-on shoes.

According to Tampa Police, she may be in the company of her biological father, Jamie Warren. He is a 36-year-old white man who is 5 feet 6 inches tall, 170 pounds with brown hair and blue eyes. He may be wearing glasses and they may be traveling in a 2000 black Honda Accord with Florida tag number DWZR40. 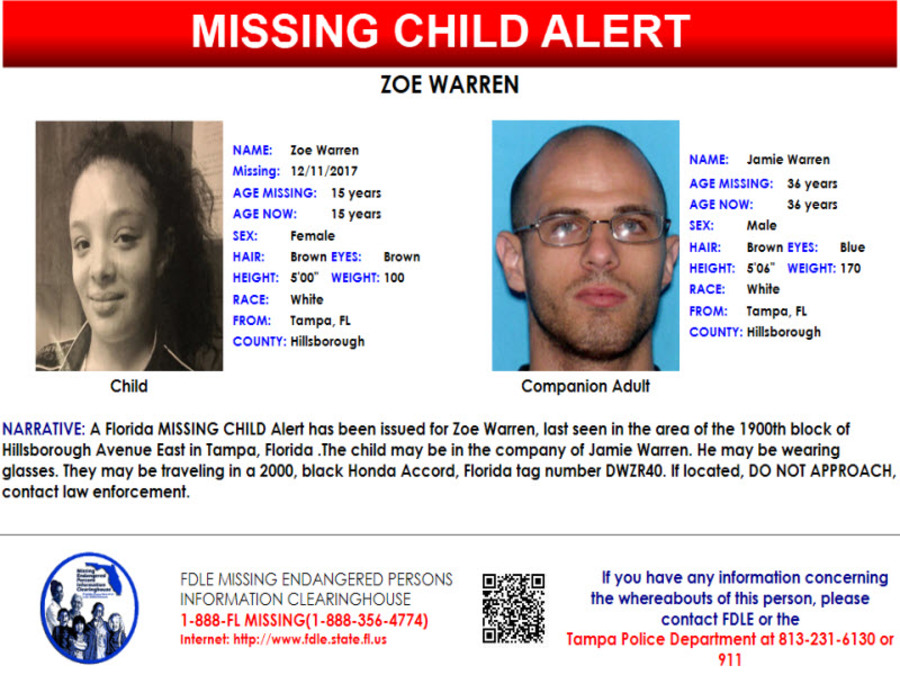 Anyone who has been in contact with Zoe Warren since Monday, or who has information regarding her whereabouts, should call Tampa Police at 813-231-6130.