Two westbound lanes on Channelside Drive between S Meridian Avenue and S Nebraska Avenue will be open during construction, but drivers can expect delays.

The sidewalk on the north side of Channelside Drive between Old Water Street and S Meridian Avenue will remain closed during construction.

Pedestrian access will be maintained via signage to other sidewalks in the area, during construction.

The entire Channelside Drive road project is expected to be completed by 9 am on Friday, January 25, 2019.

The two temporary roadway projects will impact traffic patterns for upcoming Lightning home games and other events at Amalie Arena, according to officials from the Tampa Bay Lighting.

Channelside Drive will be re-graded from Old Water Street to Meridian Avenue just East of Amalie Arena. The project will commence on December 17, 2018 and it is scheduled to be completed by the end of January.

When fans arrive at Tampa Bay Lighting games or other events at Amalie Arena, traffic flow on Channelside Drive will be reduced to one westbound lane between Old Water Street and Meridian Avenue during the first phase of construction.

After the event, traffic flow on Channelside Drive will be reduced to one eastbound lane between Old Water Street and Meridian Avenue during the first phase of construction.

Officials with the Tampa Bay Lighting say if your travels to and/or from downtown include navigation east of Amalie Arena, they recommend factoring extra time into your travel plans to ensure arrival prior to event start time.

Old Water Street will be closed to traffic between S. Franklin Street and Florida Avenue as part of Phase 1 of the Wastewater Capital Improvement project (area directly west of the Marriott Waterside). The project will commence on December 17, 2018 and it is scheduled to be completed on April 5, 2019.

Officials with Amalie Arena recommend drivers take Morgan Street, as traffic flow on Old Water Street in front of the Marriott will be significantly reduced.

Please use the Morgan Street entrance if you have a South Regional Garage season pass to Lighting games, Lightning Team officials said.

They also recommend that if you park in the South Regional Garage, or if you are coming to the Marriott Hotel on game/event days, please allow for extra time once you enter downtown Tampa.
Travel Recommendations

Officials with Amalie Arena also recommend fans and event-goers utilize the option of "Park And Ride" using the TECO Streetcar. The TECO Streetcar now offers free rides to and from any stations along their route (runs 60 minutes following the conclusion of the game). 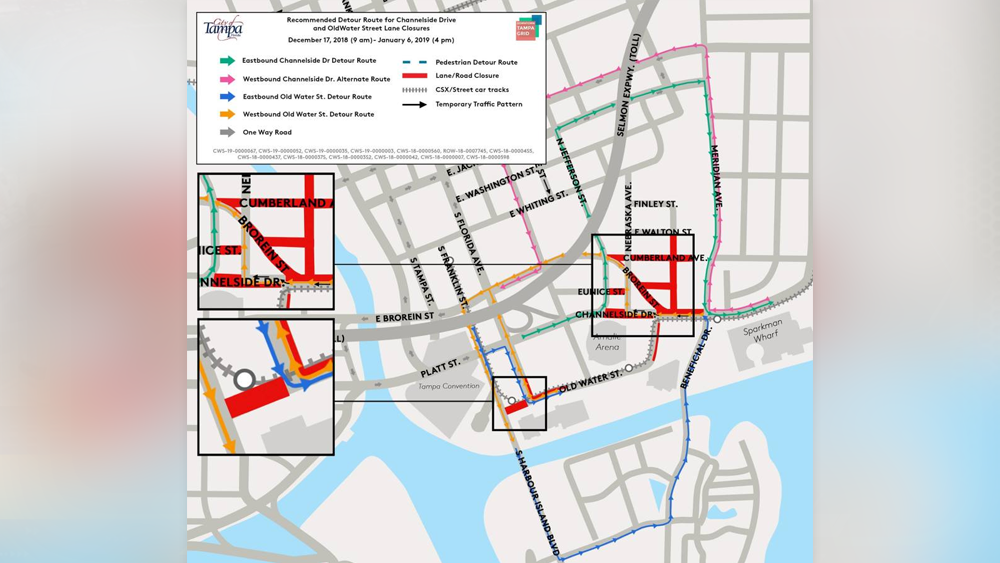