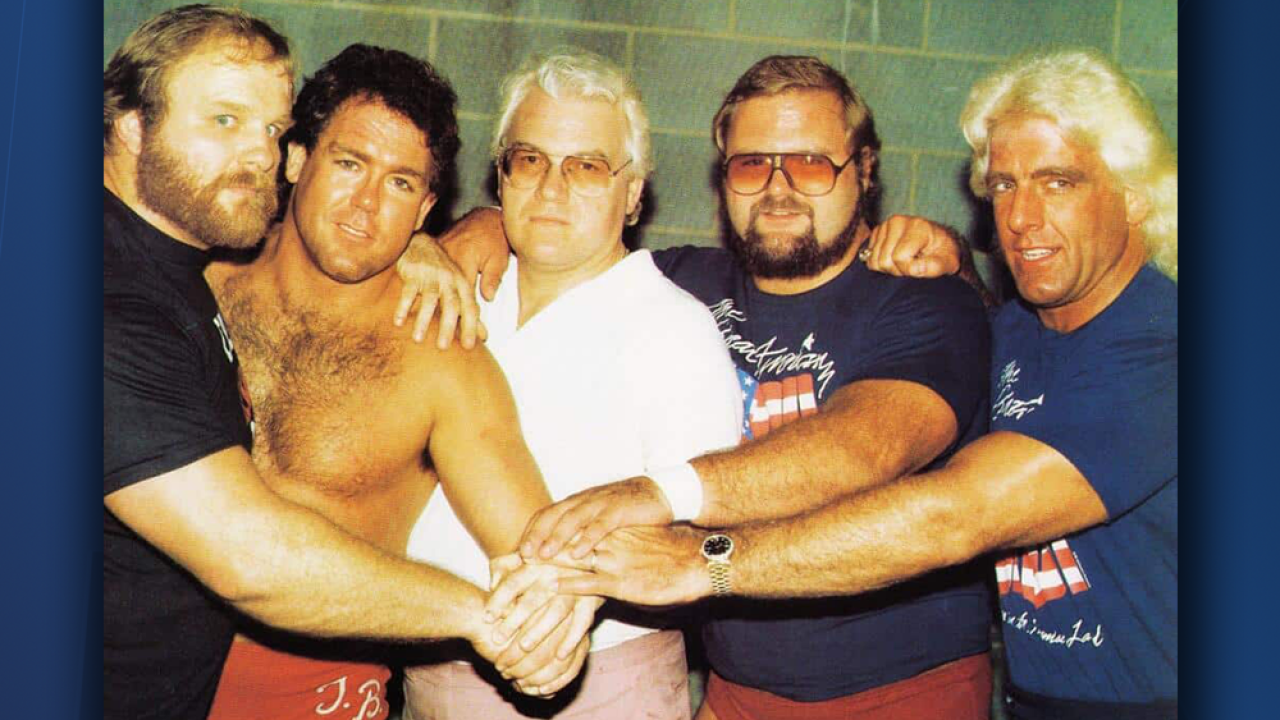 TAMPA, Fla. – James Morrison was born and raised in New Jersey. His first exposure to professional wrestling came when he attended matches at the Trenton Armory in his hometown.

Among his favorites, Johnny Valentine and the Graham Brothers – Crazy Luke and Eddie. Morrison became so enamored with Valentine that he appointed himself president of his New Jersey-based fan club.

Upon graduation from Central High School in Trenton in 1960, Morrison’s affinity for wrestling grew and soon turned into a career. He began by referring matches in the then Worldwide Wrestling Federation.

Morrison made his professional wrestling debut in 1962 – using the moniker Jim Valence. In 1971, he made his way to Tampa where he really learned what the business was all about.

“Once I got my foot in the door, I found out how revered Eddie Graham was,” said Morrison, who fans know as James J. Dillon or JJ Dillon. “I made it my goal to get to Florida so I could work and learn from him. His knowledge of professional wrestling, especially the psychological aspects, was unmatched.”

His Sunshine State debut consisted of just three matches. Dillon spent the next four years wrestling in Canada, Texas and Japan before making his way back to the Sunshine State in February 1975.

He paired up with Tampa legend Dick Slater for a tag-team match in his first bout. During his second go-round in Florida, Dillon teamed up with Nature Boy Roger Kirby to capture the Florida tag-team belts.

“Roger and I had a good run,” Dillon recalled recently, when he returned to Tampa for a “Legends Luncheon.”

“There were a slew of solid, well-established tag-teams in Florida during that time – I believe we held the belts for a couple of months during the summer,” he added.

Even though Dillon wrestled in over 3,000 matches during his ring career, fans best remember him as the manager of the Four Horseman. Red Bastien, who was the booker for Fritz Von Erich’s organization, brought him to Texas to manage a menacing heel – The Mongolian Stomper.

In 1976, Dillon took the Stomper – real name Archie Gouldie – to Atlanta, Georgia, where he also managed another scary bad guy – Abdullah the Butcher. Atlanta was the home of Georgia Championship Wrestling and WTBS, the SuperStation.

Around that time, professional wrestling ventured into the cable television market and you could watch GCW matches for two hours every Saturday night. Dillon went back to wrestling in 1977 and spent the next two years working all over the globe.

“I lived for a year in Australia,” he said. “Professional wrestling is global. While baseball and football are popular mostly in the United States, there are wrestling fans all over the world."

In the early 1980s, Dillon remained active working mostly in the states for promotions in Kansas City and Florida. Growing up, a young JJ dreamed of wrestling in front of capacity crowd in Madison Square Garden.

Dillon achieved that goal on April 23, 1984, when he wrestled Tito Santana in what was then known as the World Wrestling Federation. From there he went to Charlotte, North Carolina where he managed a tag-team known as the Long Riders. He also worked in the office where he was an assistant for the man booking the matches – The American Dream, Dusty Rhodes.

Less than a year later, Dillon became the manager of the Horsemen. The original four wrestlers that comprised the “heel stable,” were Tully Blanchard, Ole Anderson, Arn Anderson and “The Nature Boy,” Ric Flair.

The Horsemen remained one of professional wrestling’s top draws for over a decade and while Dillon, Flair and Arn Anderson were fixtures in the group, the other two spots were held by several familiar names over the years.

These days, Dillon attends meet-and-greets and discussions about his career in and outside the ring. He says in his chosen profession you make friends, but you never lose friends.

“Professional wrestling has given me everything I have in terms of material things,” Dillon said. “I was fortunate enough to break into the business because someone recognized my true passion for it, I was humble, and I always appreciated help – part of what I do now is try and pass along what I learned to folks looking to break in.”

In 2012, Dillon was inducted into the WWE Hall-of-Fame; one year later, he was enshrined in the Professional Wrestling Hall-of-Fame.