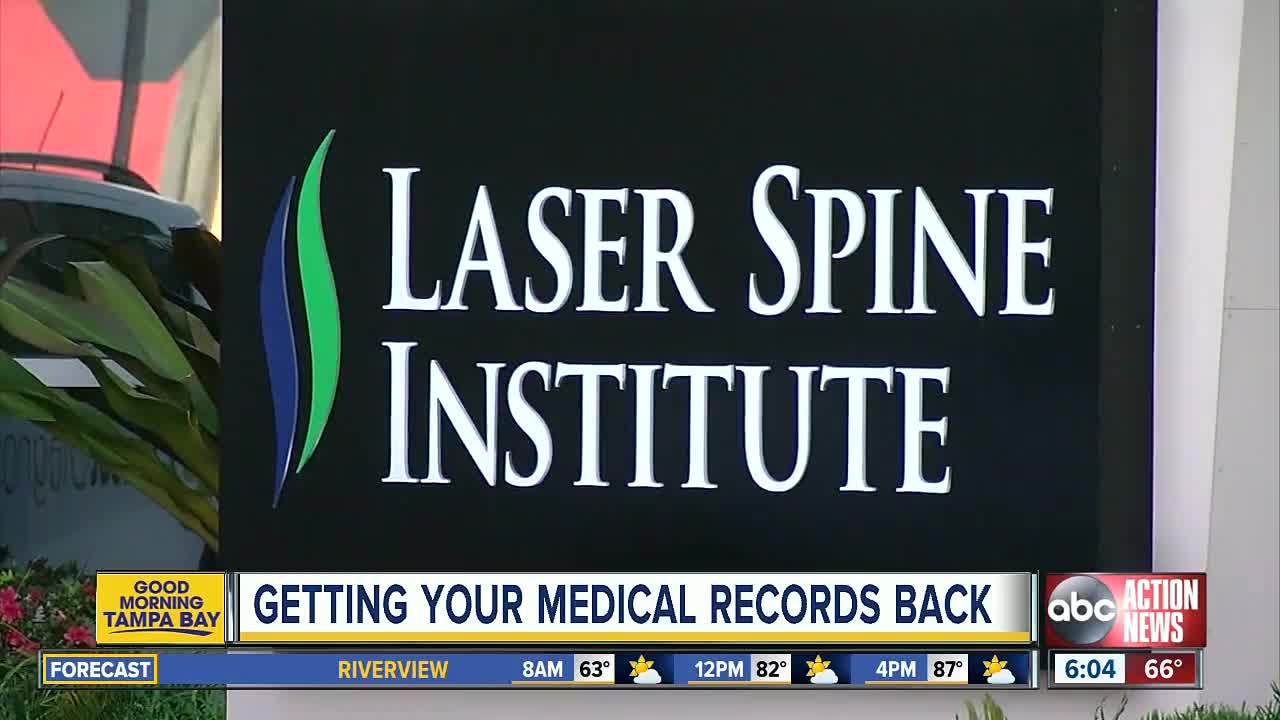 She said she needs her medical records to move forward with receiving proper post operative care, so new doctors know what was done. 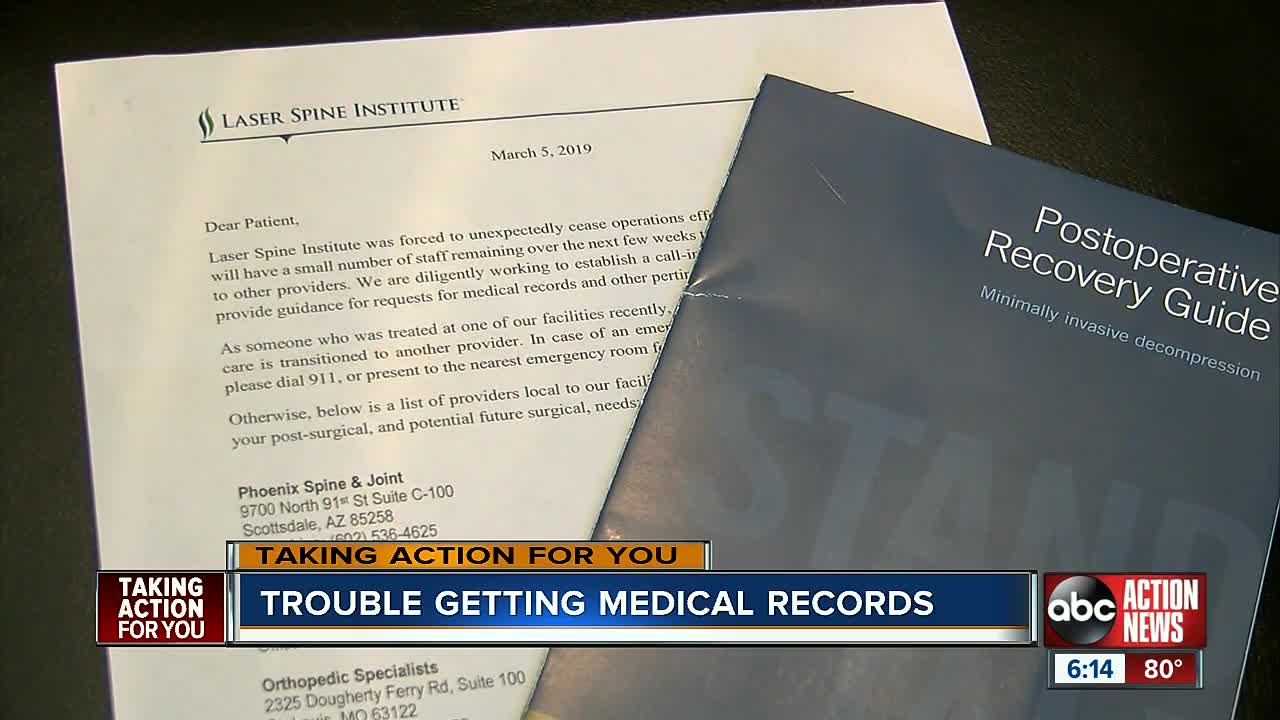 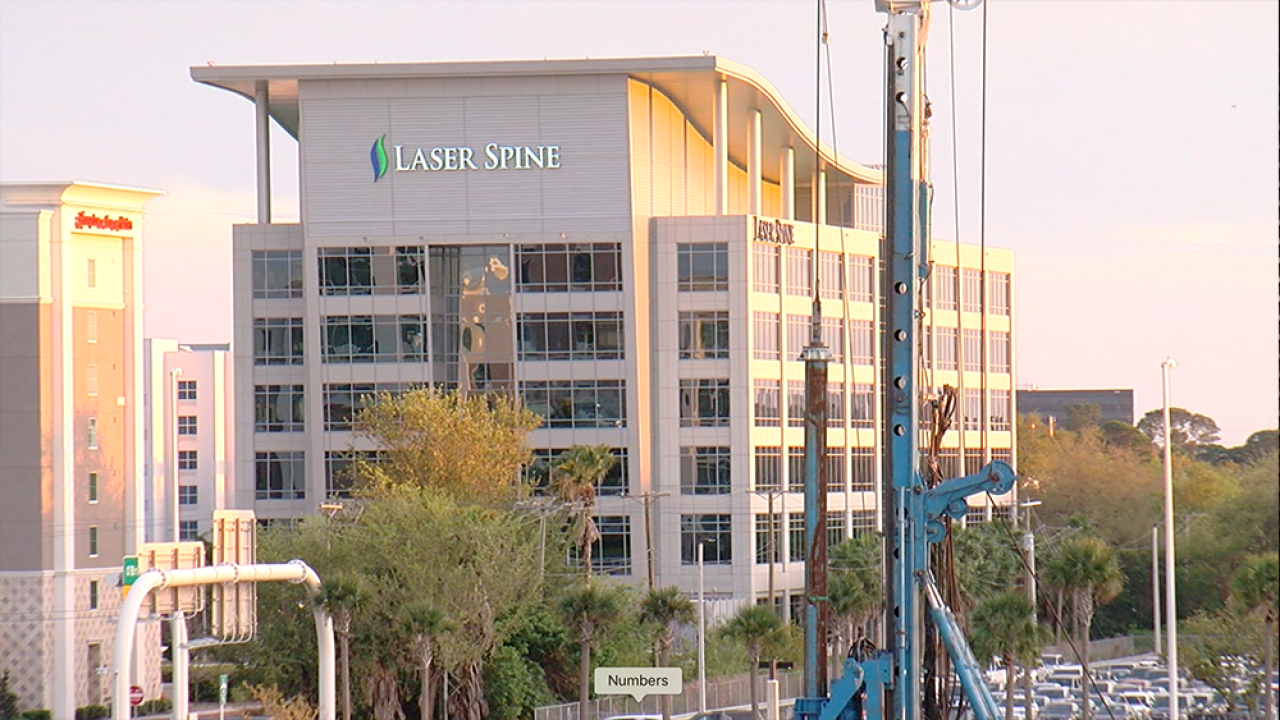 PASCO COUNTY, Fla. — A Florida woman is left fighting to get her medical records after the Laser Spine Institute closed without warning in early March.

Sorhage said she needs her medical records to move forward with receiving proper post operative care, so new doctors know what was done.

The New Port Richey woman said she's called the numbers left behind for patients to receive their information, and also reached out to other contacts she was given.

ABC Action News has learned from the state that the Laser Spine Institute had reached out to them with where patients should turn to.

The Laser Spine Institute informed the Agency for Health Care Administration that former patients can access their medical records by sending written requests to:

ABC Action News reached out to the state and the Board of Medicine to find out if other patients are reaching out to them for help.

Jay Wolfson, Associate Vice President of USF Health told us by email that, "in a matter of urgency involving the health of the patient, the state can mandate an emergency intervention, identifying the 'keeper of the records' and requiring them to release those records immediately. It is a clumsy and difficult to maneuver process, and unfortunately, it is the patient who is always at the short end of the stick."

We reached out to several email addresses linked to Laser Spine Institute and we received automatic replies with where patients should turn to.

"I’m not well, I’m still not well," Sorhage said. "Was it because I didn’t get the proper rehab after the fact?"

We spoke with representatives from BioSpine Institute who said they are having trouble getting anything more than MRI's from patients that transferred to them.

We also learned that Doctor Reginald Davis, who lost his job at Laser Spine Institute, was just hired at BioSpine Institute in Tampa. ABC Action News reached out to Biospine and they returned with a following statement:

"We’re hearing from Laser Spine Institute patients about the trouble they are having acquiring medical records, and we’ve even experienced some of the same difficulties when trying to retrieve medical records on behalf of LSI patients we are treating. Fortunately, we have a contact at LSI who is helping to ease the process by providing MRI discs with the appropriate authorization from the patient. Dr. Reginald J. Davis, who was the clinical research director at LSI, has also joined our team of minimally invasive spine surgeons, and he is helping patients with the transition. Dr. Davis is available to see patients who have had surgery with him or another LSI surgeon for follow ups and post-operative. https://biospine.com/our-physicians/dr-reginald-davis-neurosurgeon/"

He was unable to connect with his patients after losing his job, and now has his own website.

The state says patients who are unable to obtain a copy of their medical records can file a complaint with the Agency by calling 888-419-3456.