HILLSBOROUGH COUNTY, Fla. — A Fishhawk family had to rush their eight-year-old black Labrador to an emergency veterinarian after they say an alligator attack it Monday morning.

Leslie Hopkins posted a warning to her neighborhood group: 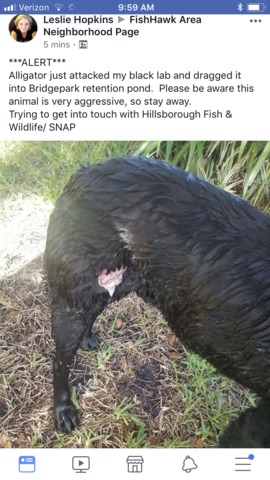 Hopkins said that her son took eight-year-old Joey near the Bridgewater fishing dock where he partially entered the water and was grabbed by the alligator.

Somehow Hopkins, who was not on a leash, was able to get away.

Neighbors like Tanya Zapf tells us the alligator has been there for years and has never been aggressive.

However, she says kids often jump in the pond.

"We have teenagers that are jumping off the dock into the water and we've told them to stay out because there's a gator in there and they don't care," said Zapf.

Zapf said trappers have tried to trap the gator on multiple occasions, but have not been able to.

She tells us she wants the gator to stay and hopes people can respect the nearby wildlife.

Zapf showed us how the alligator frequently swims around and under a fishing dock.

Joey, the lab, was taken to a Blue Pearl clinic where a vet told the family that there were more puncture wounds than they first thought.

Hopkins has a bill totaling more than $1,500 for treatment.

The family also reached out to SNAP for a trapper to remove the gator, but they need a permit and permission from the management company.

Hopkins tells us a trapper is expected to come and remove the alligator.

Neighbors also pointed out that there are no alligator warning signs -- something we reached out to the management company about but did not hear back.