The Hillsborough County Sheriff's Office have found the body of a missing carjacking victim after a bank robbery in Valrico.

VALRICO, Fla. — The Hillsborough County Sheriff's Office has found the body of a missing carjacking victim after a bank robbery in Valrico.

HCSO initially responded to a call of an armed bank robbery at the CenterState Bank in the 1800 block of Fl-60 East in Valrico. As the armed bank robbery suspect was trying to leave the bank, the suspect pointed a gun at 68-year-old Mathew Korattiyil, shoved him to the passenger's side of his white 2019 Lexus SUV and carjacked him. 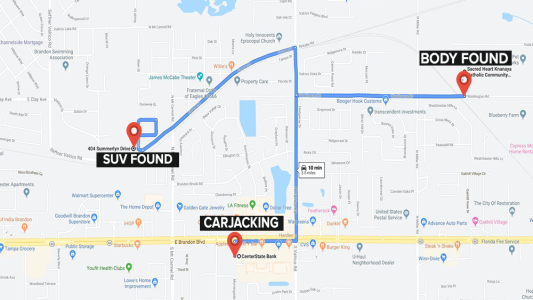 Hours after the carjacking, HCSO announced they found Korattiyil dead in a grassy area of Sacred Heart Knanaya Catholic Church located at 2620 Washington Road. The church is just five minutes from the CenterState Bank where he was carjacked at gunpoint.

Deputies are on scene where Mathew’s body was just discovered minutes ago. Many friends are here, being directed to go to his house and support family. I’m told he leaves behind 3 kids, several grandchildren. @abcactionnews pic.twitter.com/hwyaXimPbz

Friends tell ABC Action News Reporter Ryan Smith that Korattiyil was a member of the church and donated money to its community center.

RELATED: Valrico carjacking suspect, James Hanson, has lengthy criminal past including a life-sentence

At the time of Korattiyil's disappearance, HCSO spotted the Lexus SUV and a chase ensued. The suspect, later identified as 39-year-old James Hanson, eventually crashed the Lexus SUV, overturning it near the intersection of South St. Cloud Avenue and FL-60.

Hanson hit another citizen's vehicle during the chase but the driver of that vehicle was not hurt. HCSO arrested Hanson after a foot chase. He was charged with the following felonies:

HCSO is investigating how Korattiyil died.

HCSO says the carjacking happened around 10:43 a.m. and then deputies spotted Korattiyil's SUV, as well as the suspect, at around 12:14 p.m.

Deputies are looking to speak with any witnesses between that 91-minute time frame.

ABC Action News spoke with Jaison James, a family friend of Korattiyil. He said the family is devastated.

"We are looking for some answers," James said.

JUST IN: Mathew’s family, friends all praying this all ends well. I just spoke with a close family friend who says they are in “panic mode.” @abcactionnews pic.twitter.com/cfWjQcedWV

When news broke that Korattiyil was found dead, many of his family members and friends gathered at the church where his body was found.

"Every time I would go to his house, we would play with his grandkids. He is a great guy. He’s not even family but I consider him to be an uncle. He’s been there my whole life," said James.

Korattiyil leaves behind three children and several grandchildren, James said. He also owned a convenience store on Valrico Road in Dover. Although he recently retired, many customers Tuesday night brought flowers to the Marathon store, expressing condolences for the man who greeted people warmly with a smile for 25 years.

“He was a good guy, very good guy," said customer Leon Chandler. "It’s just sad that somebody had to end his life the way it did.”

“A lot of people really liked him just for being that nice guy that he was," said Briana McRoy.

Anyone with information on Korattiyil's death is asked to call the Hillsborough County Sheriff’s Office at 813-247-8200.