TAMPA, Fla. — Several areas of Tampa Bay are assessing the damage left behind from a squall of storms that produced tornadoes on both sides of Tampa Bay.

At least three tornado warnings were issued by the National Weather Service on Wednesday in Pinellas, Hillsborough and Polk Counties.

The NWS believes there were tornadoes in Pinellas Park, along the Howard Frankland Bridge and near Kathleen.

The National Weather Service said at 4:08 p.m., a “confirmed large and extremely dangerous tornado” was located over the Howard Frankland Bridge, southwest of Tampa. It was moving northeast at 35 mph.

Pinellas Park Police say at least 25 structures were damaged by the storm. The storm also left thousands of customers without power.

Below is a timeline of events. 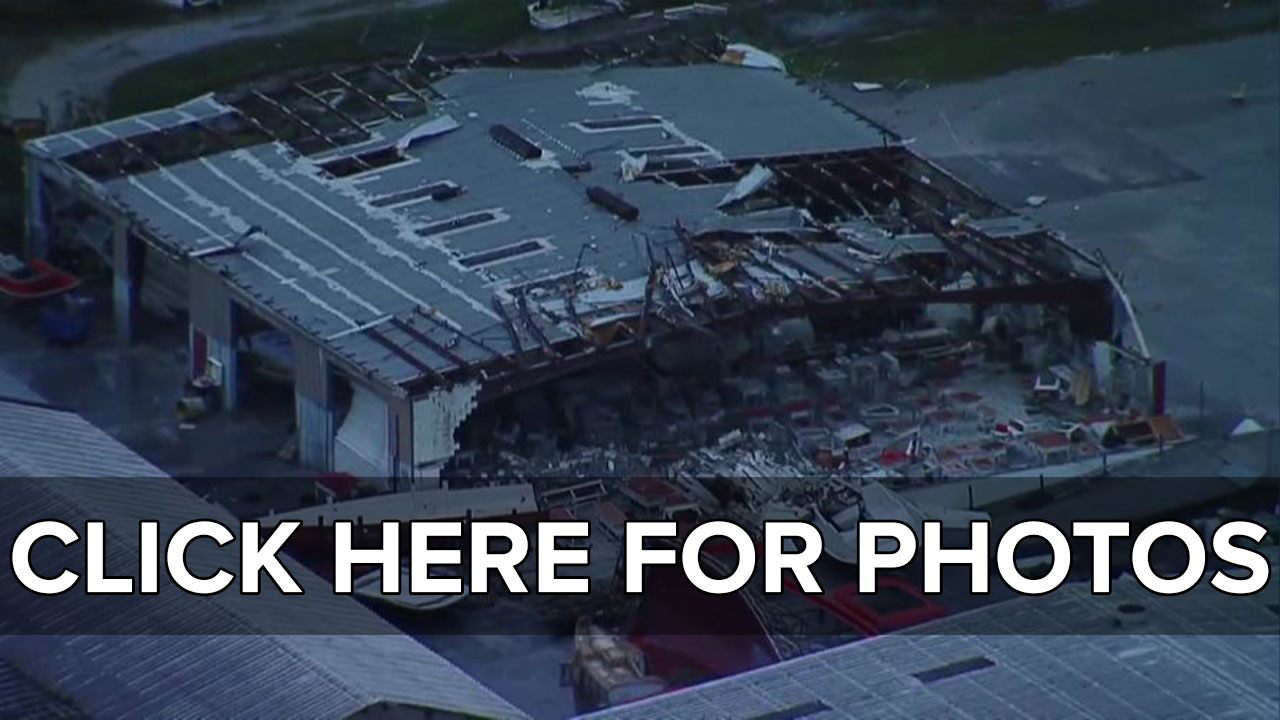 The National Weather Service confirmed there were two tornadoes in the Tampa Bay area Wednesday. An EF-2 tornado tore through Pinellas Park and then an EF-1 tornado hit part of Polk County.

Polk County woman waits hours to get home after tornado

Crews are removing tree branches and loose tree limbs in the neighborhood on Elmhurst Drive in Pinellas Park.

A business in an industrial park off Bryan Dairy Road suffered extensive damage during Wednesday’s tornado.

“It’s tragic,” said Kirk Blosser. “I’m waiting to get to my business just to see how much damage was done. It’s a big setback. Hopefully, everybody gets together and helps each other out.”

Strong winds flipped a worker’s truck on its top. The tornado also tipped over a semi-truck trailer and peeled the roofs off of several buildings.

POWER OUTAGE UPDATE: There are 2,410 Duke customers without energy due to severe weather

Both locations will be open from 10 a.m. to 1 p.m. No ID or screening is required to pick up food.

Duke Energy reports “significant damage” to its electrical grid in the Pinellas Park and Largo areas. More than 25 power poles need repairs or replacement. Duke says crews are beginning to make repairs. Some customers will have serviced restore tonight, but some areas may extend into Thursday. 14,000 customers were impacted in the initial outage.

Polk County Fire Rescue said half a dozen homes were damages due to the storms. There were no injuries.

About 13,000 Duke customers are without power in Pinellas County

Here is a look at the damage in the 10900 block of Endeavour Way in Pinellas Park.

Tornado Warning for Polk County to expire at 5:30 p.m.

Over 2,300 TECO customers are without power after the storm passed through.

There were 25 structures damaged in the Brian Dairy area after the storm passed through. There were no injuries, police said.

Here are clips of the storm off I-4:

Here are pictures of tornado damage in the 12000 block of 49th Street N in Clearwater:

Tornado Warning issued for Hillsborough and Polk Counties until 5:30 p.m.

New tornado warning until 5:15: east of Tampa for areas around Thonotosassa, Seffner & Plant City along and north or I-4. Radar indicated rotation meaning not confirmed but could see a tornado at any time. @abcactionnews pic.twitter.com/J1gUWqmQDX

Duke Energy reports over 10,000 customers are without power

A Tornado Warning has been issued for our area. Stay tuned for the latest weather updates on https://t.co/FV4uJ9fdjq pic.twitter.com/znf1dQtXzT

A Tornado Warning has been issued for our area. Stay tuned for the latest weather updates on https://t.co/FV4uJ9fdjq pic.twitter.com/znf1dQtXzT