A 92-year-old woman's roof collapsed over the weekend after days of rain from Subtropical Storm Alberto.

NEW PORT RICHEY, Fla. — A 92-year-old woman's roof collapsed over the weekend after days of rain from Subtropical Storm Alberto.

Agnes Duda, 92, has lived in her New Port Richey home in the Park Lake Estates neighborhood since 1989.

Duda lives with her daughter and spoke with ABC Action News on Tuesday.

"It looks like the sky caved in," said Duda, referring to the roof of her home.

You can see the giant hole that's left as the cement-style tiles fell in from the roof. 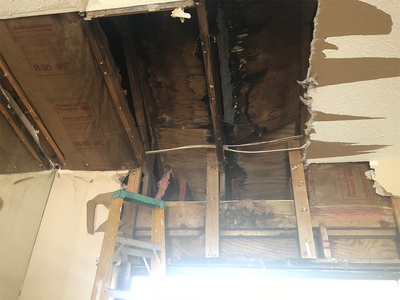 Duda's family noticed a small leak in the roof after Irma hit Pasco County last summer, but they say they didn't have enough damage for a claim.

The 92-year-old lives on a fixed income, and has monthly medical expenses that add up to around $800 per month.

The thought of needing a new roof worries Duda as the financial burden is heavy.

"I was hoping that some people could lend a little help, and we can get this roof replaced for her," said Kim Fanning, a family friend.

Fanning tells us friends are sharing Duda's story on social media on different Facebook pages to see if there is anyone to help the 92-year-old.

Pasco County tells us they can help people in emergencies through their Human Services division based on age and income. They are reaching out to Duda to see if they can offer any type of assistance or where to go for help.

You can find more information about how Pasco County can help people in emergencies by clicking here.

The City of Tampa has a home rehabilitation program through the city, but the deadline to apply for help on updates is May 31.

For more information on if you qualify for assistance through the city, click here.

Hillsborough County and the city of St. Petersburg are partnering with Solar Energy Loan Fund (SELF) to help people with improvements. SELF, a non-profit organization helps with solar panels, roofs, adding hurricane proof shutters and doors, and more. They tell us your credit score does not impact eligibility and if the loan isn’t paid you won’t lose your home.

Those interested in reaching out to SELF can reach the St. Pete office at 727-315-3223 or at jessical@solarenergyloanfund.org.