On Dec. 15, neighbors alerted us about a starved dog kept on a property in Zephyrhills. The dog, named Bandit, now has a new and loving home.

DADE CITY, Fla. — On Dec. 15, neighbors alerted us about a starved dog kept on a property in Zephyrhills. The dog, named Bandit, now has a new and loving home.

"I’m so glad he walked off that property and you guys found him," said the man who adopted Bandit, Steve Shanahan.

Pasco County Animal Services cared for Bandit for weeks. They helped treat his heart worm and other parasites, and helped him gain more than 20 pounds. 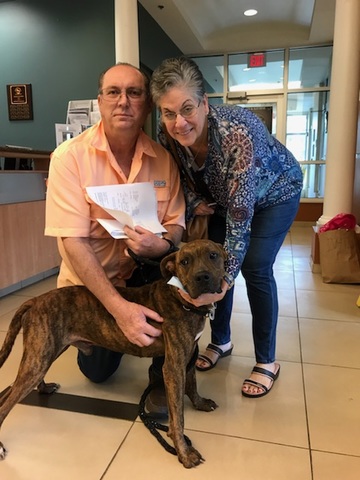 "She came and said, you’ve got to look at Bandit, he’s such a lovable little guy." said Shanahan

He says he and his wife fell in love. Now the two are inseparable. "If I’m sitting in the chair he’ll look me in the eye, and the next thing I know he’s in the middle of my chest."

When Shanahan learned about Bandit's past he said, "That's just sicking. Those are the kind of people you’d like to put them in place of the dog."

Now, thanks to caring people, Bandit is in the loving home he deserves.