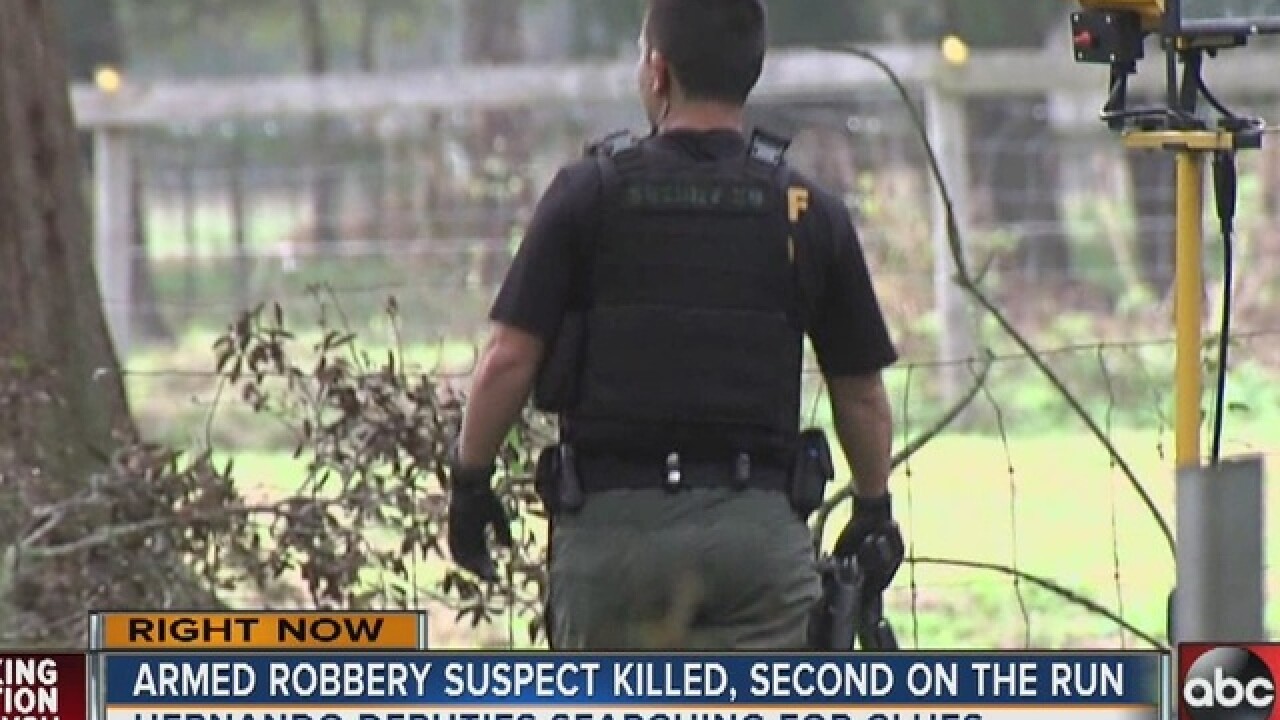 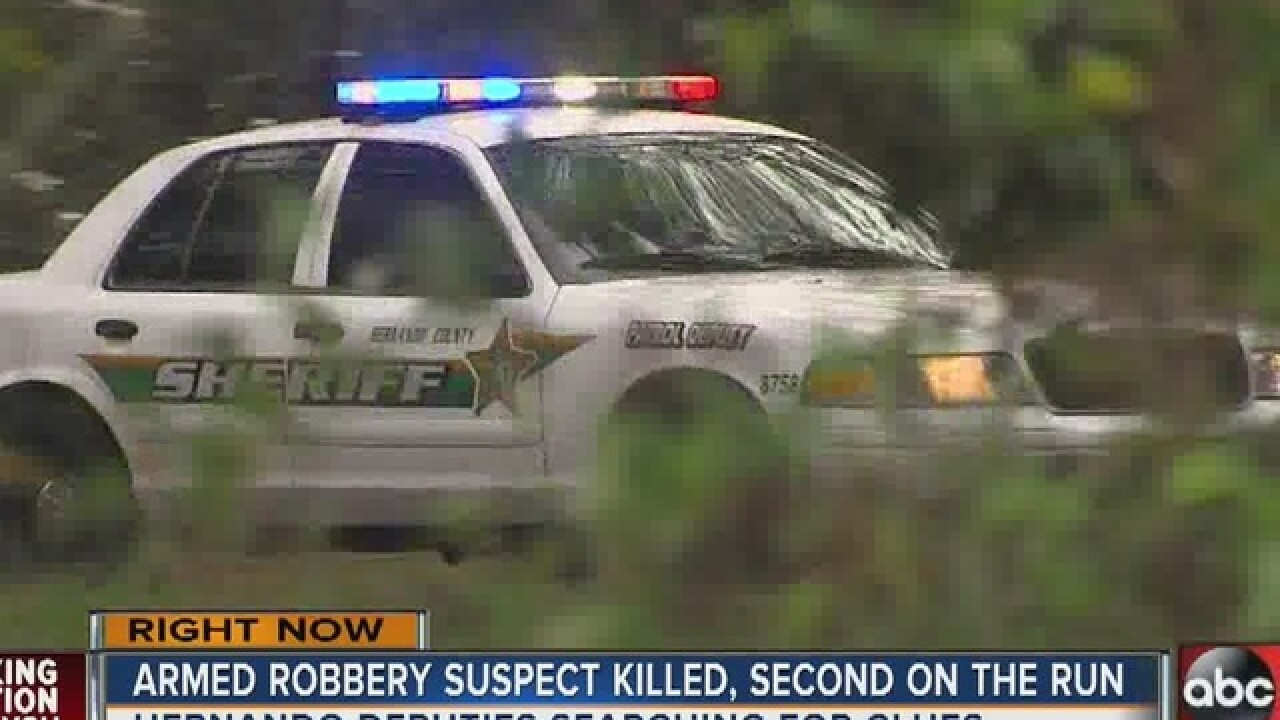 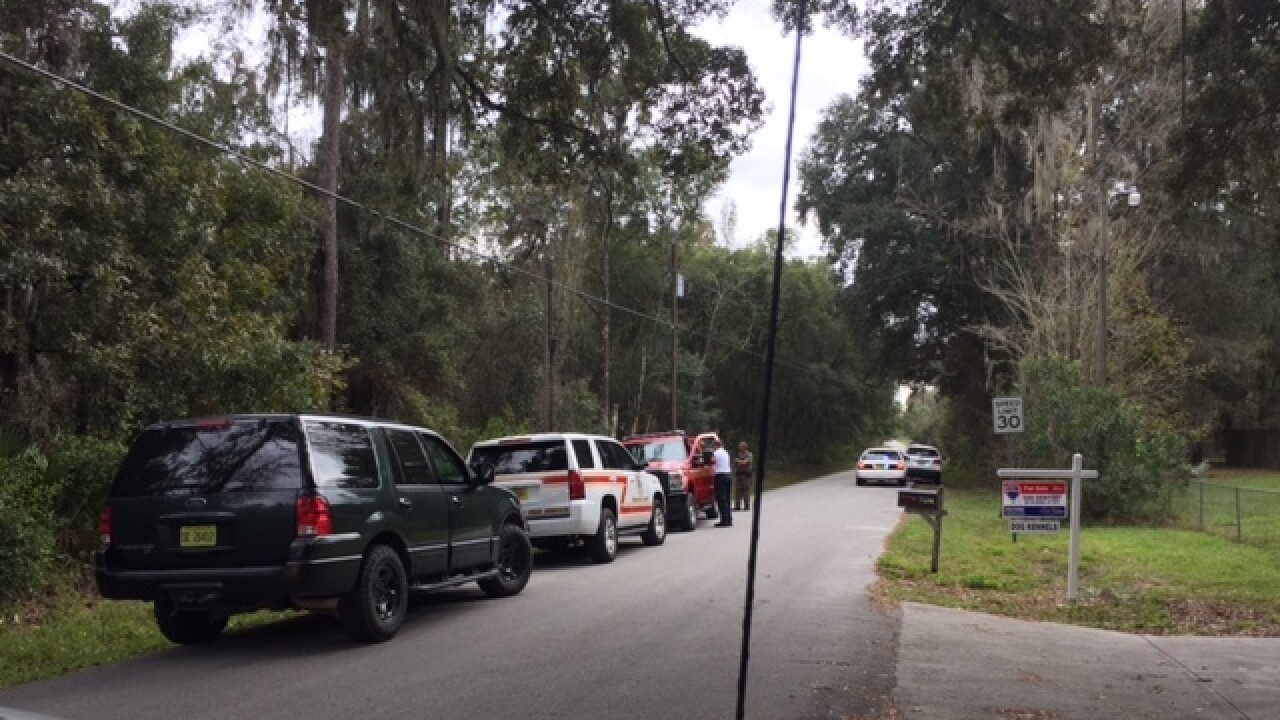 One suspect is dead, another still on the loose after two Hernando County Sheriff's Deputies were searching for the armed gunman who had just robbed a Brooksville, Dollar General.

Hernando County Sheriff's deputies are urging people in the area near Saturn and Endsley Roads in Brooksville to stay in their homes after one suspect in an armed robbery remains unaccounted for. This comes after a Hernando County deputy has been involved in a shooting.

According to a release, deputies shot and killed an armed robbery suspect in the area of Saturn and Endsley Roads in Brooksville. The suspect was down in a nearby field while authorities searched for a second suspect.
No deputies were injured.

The pursuit began after an armed robbery at a nearby Dollar Store at 6336 Sherman Hills Blvd, where customers followed and tried to box in the suspects with their vehicles. One customer was dragged alongside the suspects car, but didn't sustain any serious injuries.

Customers then followed the two men accused in the armed robbery to a field in the area of Saturn and Endsley Roads, where the two suspects split up. That's when investigators told ABC Action News they feared for their lives and shot one of the suspects, who later died. The other suspect took off into the woods, investigators said.

"They split up in the woods," Hernando County Sheriff Al Nienhuis said. "A K-9 and two deputies responded to the area and came across one of the suspects. The preliminary information I got is that they did fear their lives were in danger."

The sheriff did not say which deputy opened fire, or if it was both.

Nienhuis said the suspects are no strangers to law enforcement.

"They may have been involved in some criminal activity out of the state," Sheriff Nienhuis said. "The vehicle they were in is linked to some crimes up in the Northeast."

Deputies have been searching for this additional armed robbery suspect for hours in this extremely wooded and rural area. Deputies are now growing concerned about the search as the man may be hiding in one of the various outbuildings. They believe he was last spotted in the woods near Culbreath Road in Brooksville.

Residents in the area are asked to stay indoors and call 911 if they spot anything suspicious.

Neighbors have reported various sightings of suspicious activity, but so far, deputies have run into several dead ends in terms of getting this second man into custody.

"We're using our air unit, we're using our canines, we have canines here from other agencies. So we do believe we're close and we are hoping to get our hands on him really soon," said Denise Moloney of the Hernando County Sheriff's Office.