SARASOTA COUNTY, Fla. — 9 dolphins have turned up dead in Sarasota County over the past week and biologists are worried many more will die.

Harmful Algal Bloom (HAB) known as 'Red Tide' is the suspected cause.

But the threat to dolphins isn't just the toxic algae bloom, which can suffocate the dolphins. The algae bloom is also poisoning their food supply.

More than 66 tons of dead fish have washed ashore in Sarasota County so far in August.

RECOMMENDED: More than 66 tons of fish removed from Sarasota County beaches in August

An Eckerd College biologist is warning this will have long-term impacts on the local dolphins, based on what happened in 2005, when the last major Red Tide hit the Gulf Coast of Florida.

"One of the big impacts on these dolphins from Red Tide is that fish mortality. They depend on that fish to eat and so while they might not be directly killed by the Red Tide, they go through 6 months to a year of being deprived of food," says Dr. Shannon Gowans of Eckerd College. 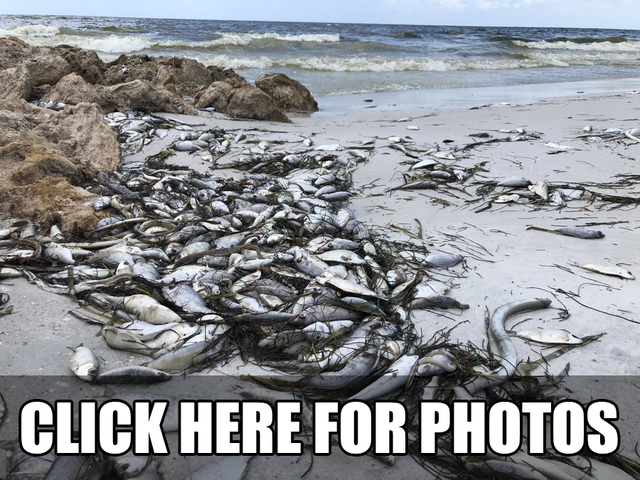 Dr. Gowans says this food deprivation can also lead to other damaging, long-term side effects.

"They switch to preying on fish from fishermen," says Dr. Gowans of the local dolphins. "So if people would dump their bait over the side, that attracted the dolphins over to the boats. They would eat that even though they didn't prefer it. Then they started associating food with fishing boats."

Dr. Gowans says this increased the chances dolphins were hit by boats and says after 2005 they had many cases of dead dolphins found entangled in fishing lines or dead dolphins with hooks in their stomachs.

She is urging people who fish to avoid dolphins at all costs.

"That's ones of our biggest concerns and that's the big message I would have, is if you see dolphins while you're fishing just pull up your line and fish somewhere else. You don't want to be fishing if they're going to come and steal your fish so go somewhere else," Dr. Gowans tells ABC Action News.

As for the algae bloom itself, it could go away soon but is more likely to stay in the water for months to come. Scientists say this bloom appears to be an especially strong and concentrated batch.