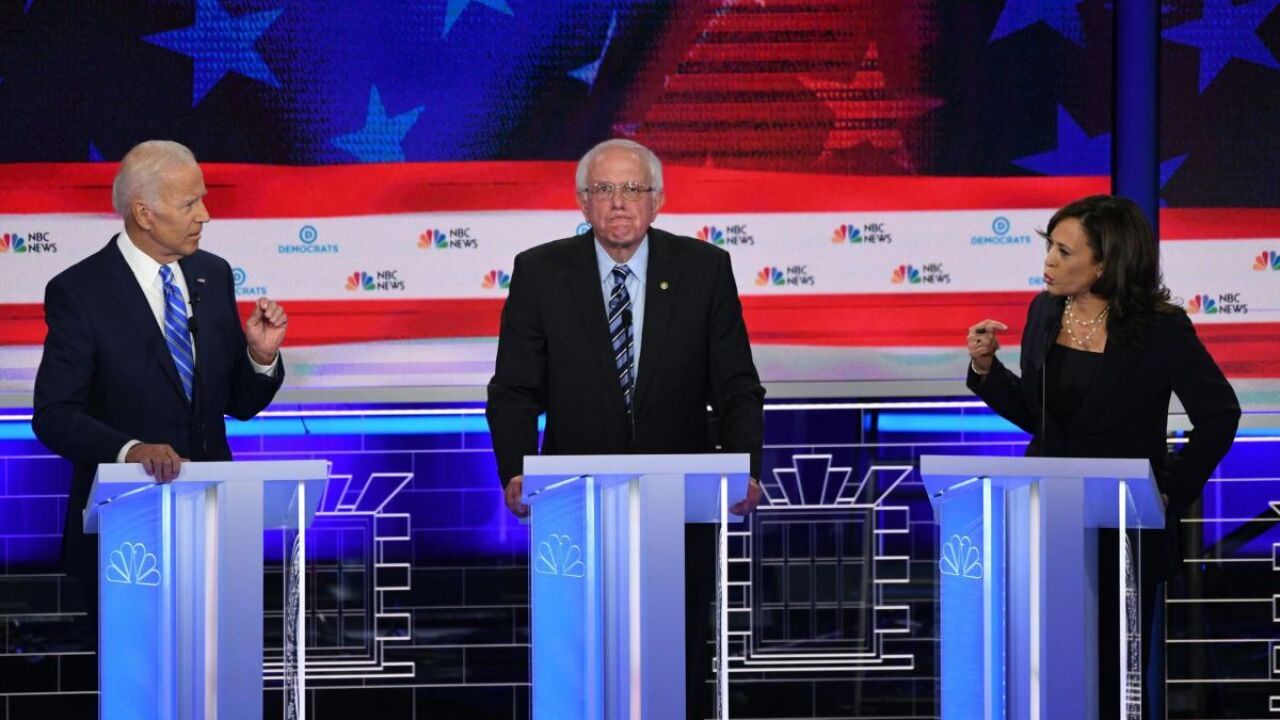 Democratic voters tuned into Thursday night's debate searching for the candidate who could take down Donald Trump in the 2020 presidential election -- and many flipped on their television sets expecting that person to be front-runner Joe Biden.

In a surprise twist, it was former prosecutor Kamala Harris who took command of the debate stage, outshining her rivals time after time with succinct and fiery denunciations of the Trump administration's policies on everything from the treatment of migrant children to the gaping income equality in this country—and even setting the tone early in the debate by reminding her colleagues that Americans don't want a "food fight," they want to know Democrats are "going to put food on the table."

The drama of that exchange overshadowed the two-hour debate that encapsulated a broad array of policy debates, and a clear divide on the stage between candidates like Sanders and Warren who want to see the party veer in a more leftist direction with "Medicare-for-All" and the disappearance of private health insurance, and more moderate candidates like former Colorado Gov. John Hickenlooper and Colorado Sen. Michael Bennet who worry that the Democrats' shift to left will endanger the parties chances of retaking the White House.

But it was the spell-binding moment when she challenged Joe Biden over his invocation of working with former colleagues who were segregationists and his record on busing that will be replayed hundreds of times.

With a withering series of questions and an emotional allusion to the fact that she was one of those little girls who rode those buses, Harris went a long way toward proving to Democratic voters that she can -- as she often tells audiences -- fiercely prosecute the case against Trump.

In this case, Biden was her foil.

Leaning heavily on the skills that made her so effective both as a prosecutor and as an interrogator of Trump nominees in Senate hearings over the past few years, she began quietly by alluding to the controversy that Biden stirred last week at a fundraiser when he noted that he had worked with segregationist senators in the 1970s and 1980s during what he framed as a less polarizing, more civil time in politics.

"Vice President Biden, I do not believe you are a racist, and I agree with you, when you commit yourself to the importance of finding common ground," Harris said. "But I also believe -- and it's personal -- it was actually hurtful to hear you talk about the reputations of two United States senators who built their reputations and career on the segregation of race in this country."

As Biden stared straight ahead, looking somewhat pained, Harris continued by criticizing the former vice president for trying to prevent the Department of Education from enforcing school busing to integrate schools during the 1970s, noting that decision hurt a little girl in California.

"That little girl was me," Harris said with emotion swelling in her voice. "So I will tell you that on this subject, it cannot be an intellectual debate among Democrats. We have to take it seriously. We have to act swiftly."

His voice rising, Biden attempted to strike back, calling Harris' remarks a "mischaracterization of my position across the board."

"I did not oppose busing in America," Biden replied. "What I opposed is busing ordered by the Department of Education, that's what I opposed."

Harris brushed off Biden's argument for local control, arguing the federal government must step in to keep civil rights from being violated "because there are moments in history where states fail to preserve the civil rights of all people."

The moment dealt the front-runner a serious setback that is likely to lead more than a few voters to question whether he is the best-equipped candidate to take on the current occupant of the White House. Biden eventually seemed to concede the exchange after attempting to list a long litany of civil and equal rights causes that he had championed, simply saying, "My time is up."

Despite strong answers out of the gate about income inequality in America and Trump's economic policies that that favor the wealthiest Americans, Biden and Sanders, at times, seem to recede on the stage as Harris and South Bend, Indiana Mayor Pete Buttigieg delivered composed, thoughtful and emotionally charged answers that have resonated with Democrats who are seeking a fresh generation of leadership.

One of the most striking answers from Buttigieg was about his frustration that he has not been able to do more to diversify the police force and soothe the racial tensions that flared after a white police officer shot and killed an African American man.

When asked about the lack of diversity in the police force, Buttigieg answered frankly: "I couldn't get it done."

He acknowledged that situation has been complicated by the fact that the officer didn't have his body camera turned on.

"We are hurting. I could walk you through all of the things we have done as a community," Buttigieg said. "All of the steps we took, from bias training to de-escalation, but it didn't save the life of Eric Logan. When I look into his mother's eyes, I have to face the fact that nothing that I say will bring him back."

Many candidates looked to score points on Biden, none more so than California Rep. Eric Swalwell, who is barely registering in the polls, who took a direct jab at Biden's age.

With a grin, Biden responded by saying "I'm still holding on to that torch," and then quickly moving on to his education plans, including focusing on schools in distress and tripling federal funding for Title I schools."

The debate, the second of two back to back match-ups among 10 candidates on NBC in Miami, was the first test for the former vice president since he left government in January 2017, and he aimed to show that he has the kind of message discipline that has been lacking in some of the bumpier parts of his career in politics.

Sanders unapologetically advocated for his plan for Medicare-for-All and made no excuses for the fact that taxes for the middle class would go up under his plans while arguing their health care costs would go down.

"We have a new vision for America," Sanders said. "At a time when we have three people in this country owning more wealth than the bottom half of America while 500,000 people are sleeping on the streets today. We think it is time for change."

It was a moment early in the debate that was firmly on Sanders' ground, as many candidates were left attempting to answer questions about his signature health insurance policies.

Biden made an argument that may go over better with the moderates and independents he plans to target in the general election - stating that he would force major change in the economic system by reversing Donald Trump's tax cuts.

Harris took that opening early in the debate to weigh in with the core argument of her candidacy: "Working families need support and need to be lifted up and frankly, this economy is not working for working people," she said.

Several of the lower tier candidates, however, challenged Sanders and his ideas -- arguing that they would be too far out of the comfort zone of average Americans in a General Election

After one of the moderators noted that Sanders identifies as a Democratic socialist, Hickenlooper warned that the specter of socialism would give Republicans an opening to "come at us every way they can."

Bennet said that while he agreed with Sanders about the importance of addressing income inequality: "Where I disagree is on his solution of Medicare-for-All," he said. Bennet proposed a slower approach toward achieving universal health care.

But Sanders defended his potential to take on Trump by citing the latest head-to-head matchups with the President as proof of his electability.

Some of the most unusual moments of the night came in the answers from Williamson, an author and spiritual adviser.

Williamson's closing argument took on the same other-worldly quality. She said she was sorry that the candidates hadn't talked more about how they were going to beat Donald Trump -- even though that was one of the major themes of the debate.

"I have an idea about Donald Trump. Donald Trump is not going to be beaten just by insider politics talk. He's not going to be beaten just somebody who has plans. He's going to be beaten by somebody who has an idea what this man has done," Williamson said. "This man has reached into the psyche of the American people and he has harnessed fear for political purposes. So, Mr. President, if you're listening, I want you to hear me, please. You have harnessed fear for political purposes and only love can cast that out."

"So I, sir, I have a feeling you know what you're doing. I'm going to harness love for political purposes. I will meet you on that field. And, sir, love will win."