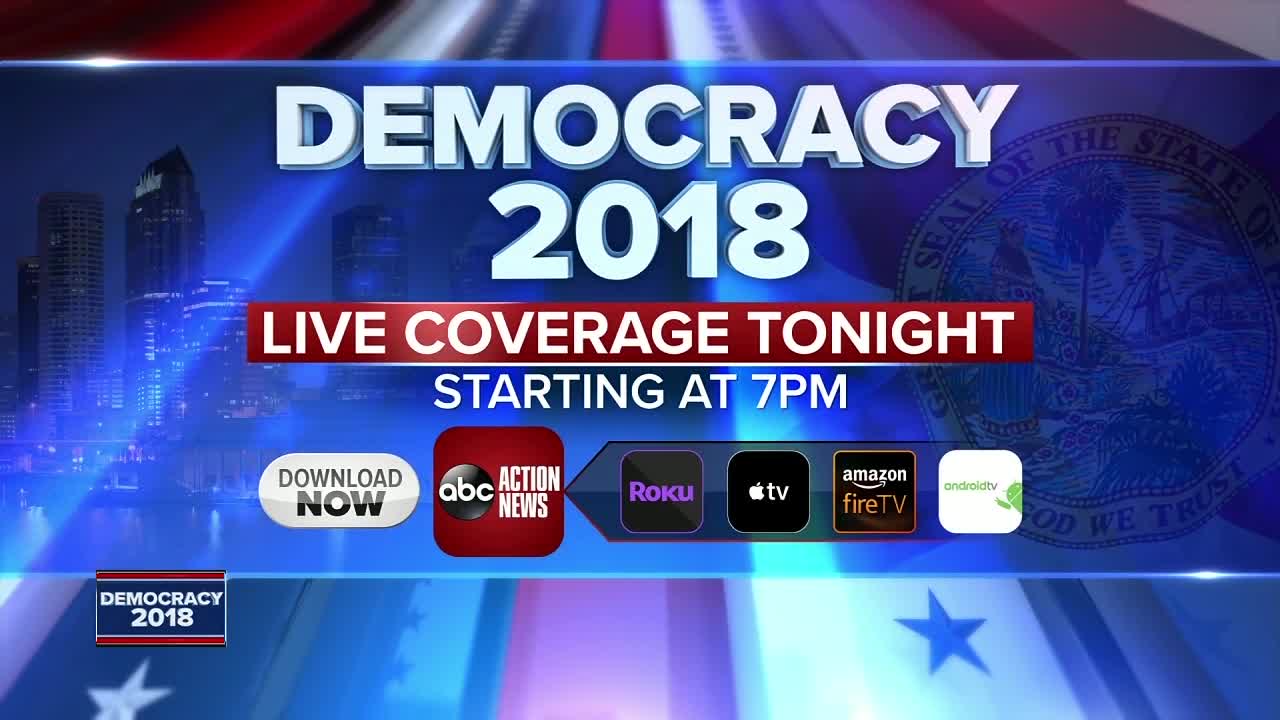 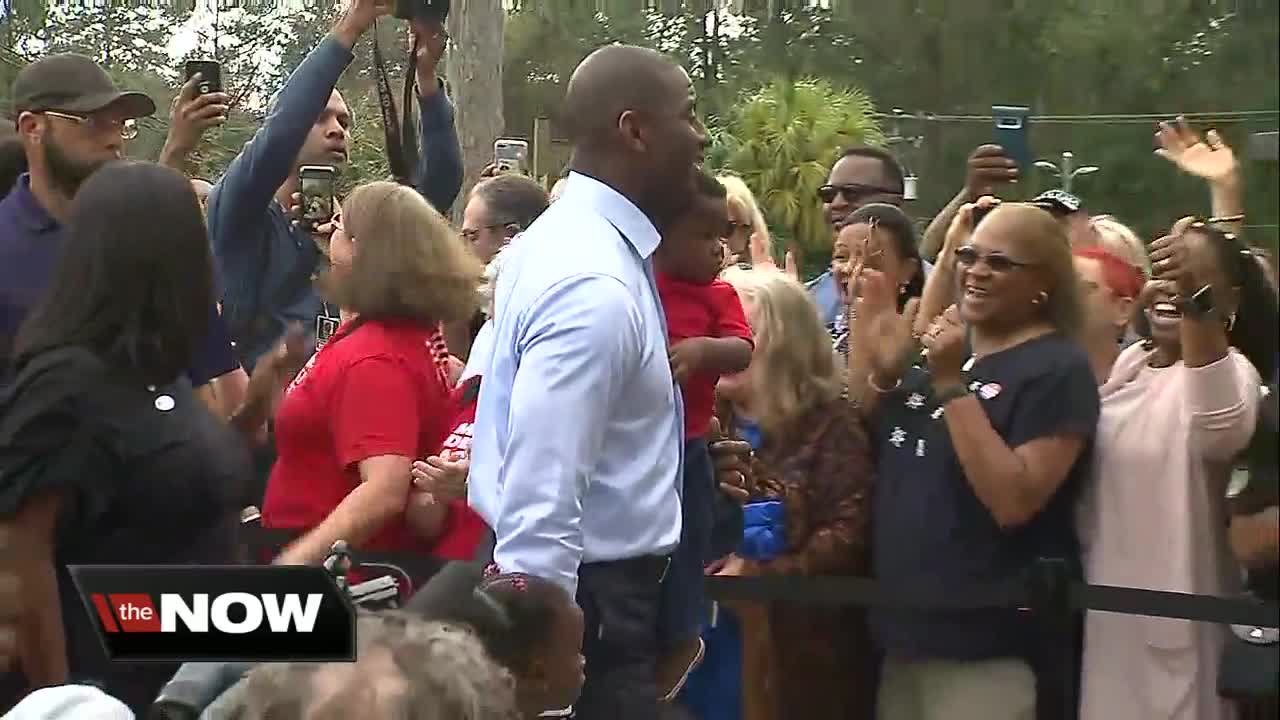 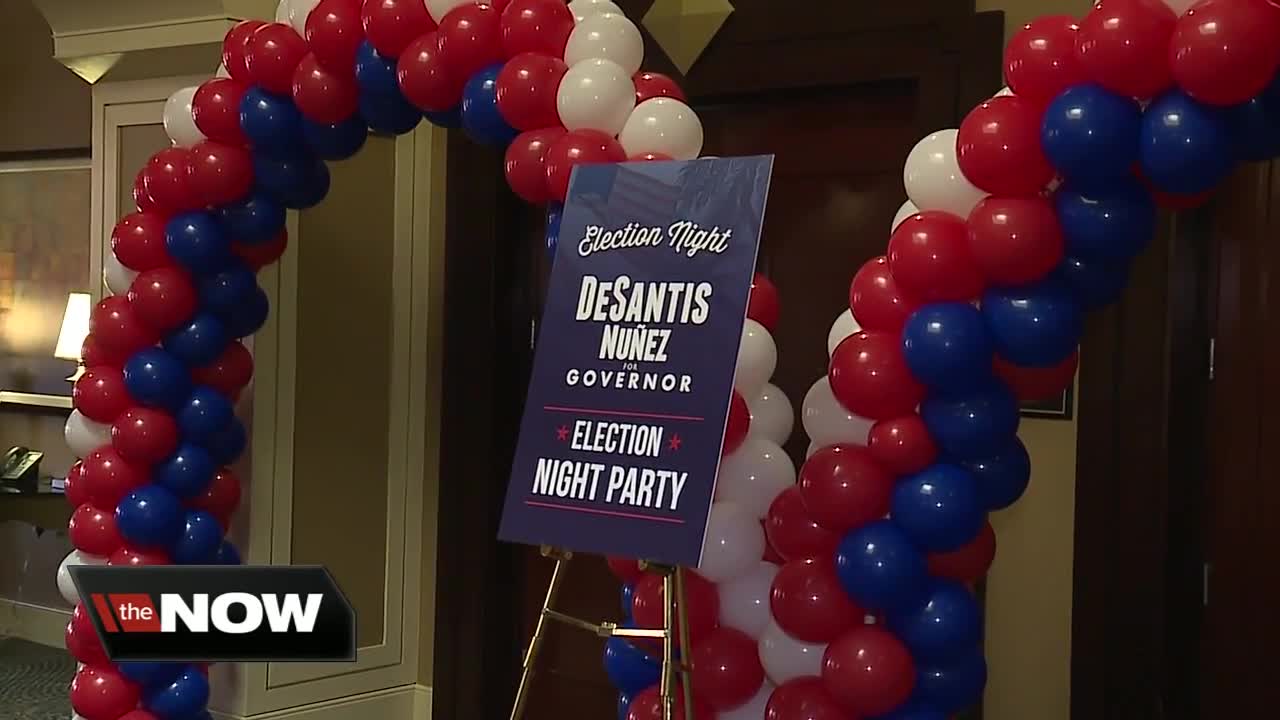 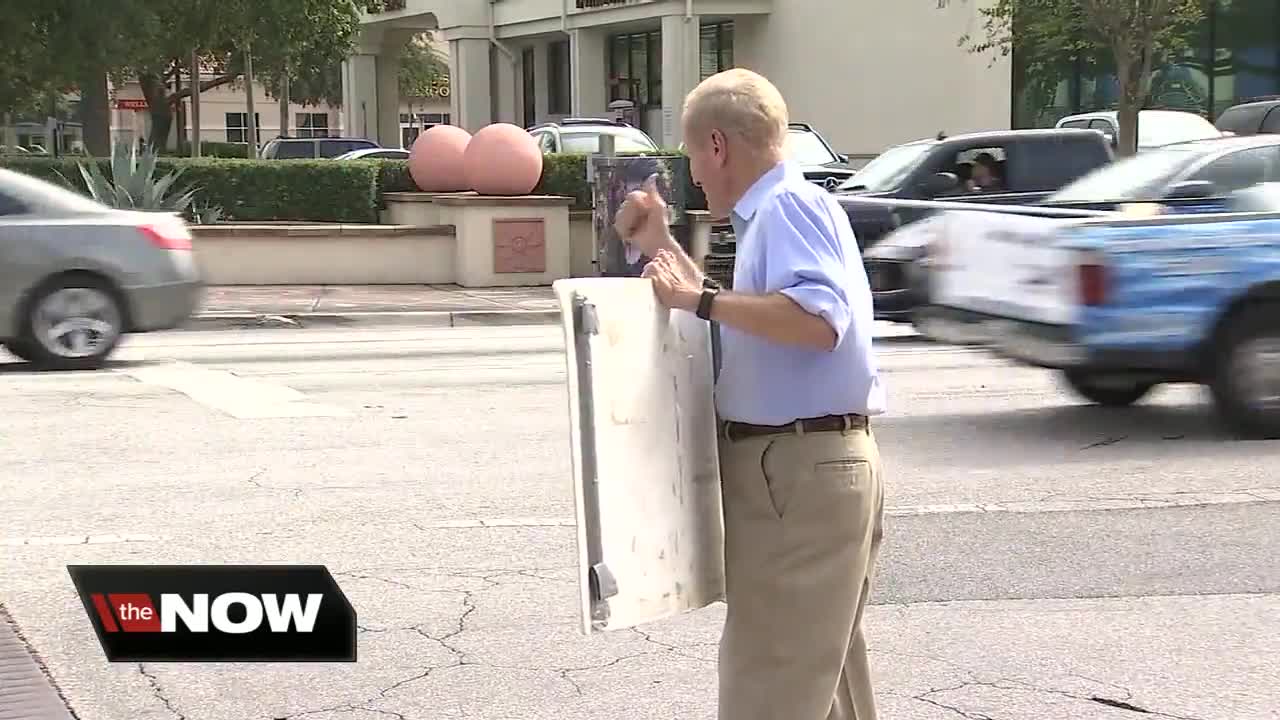 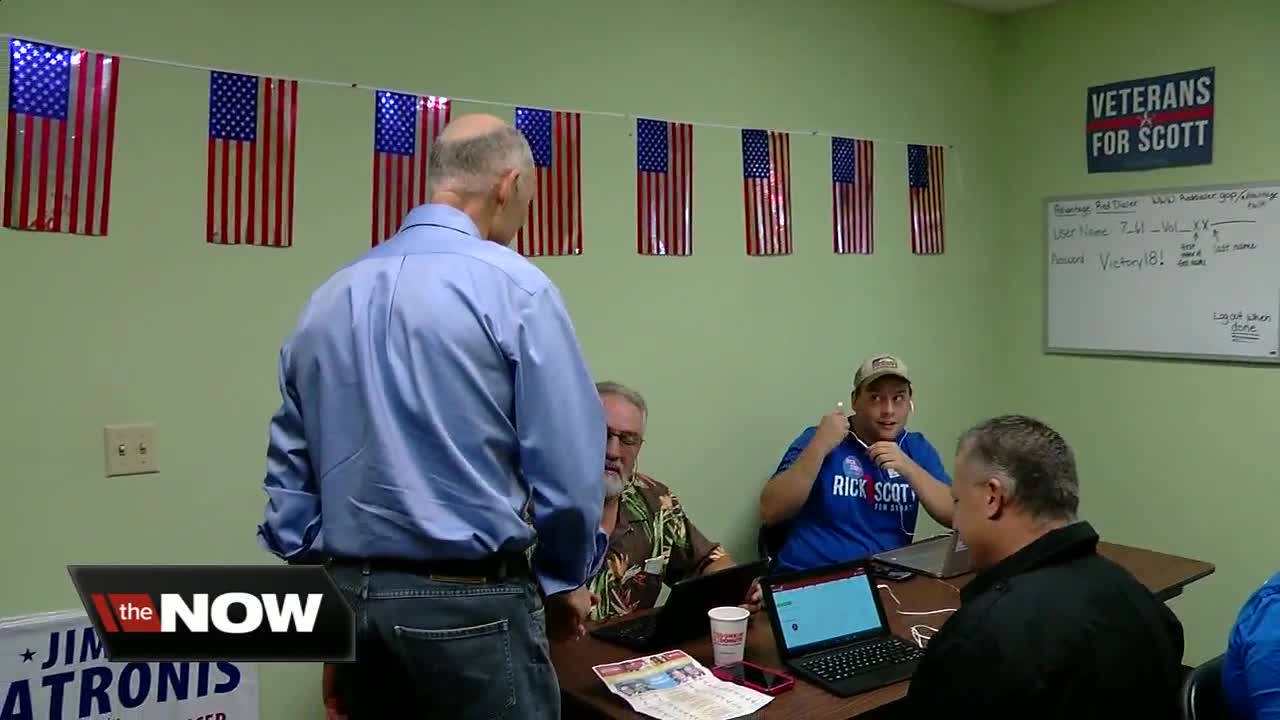 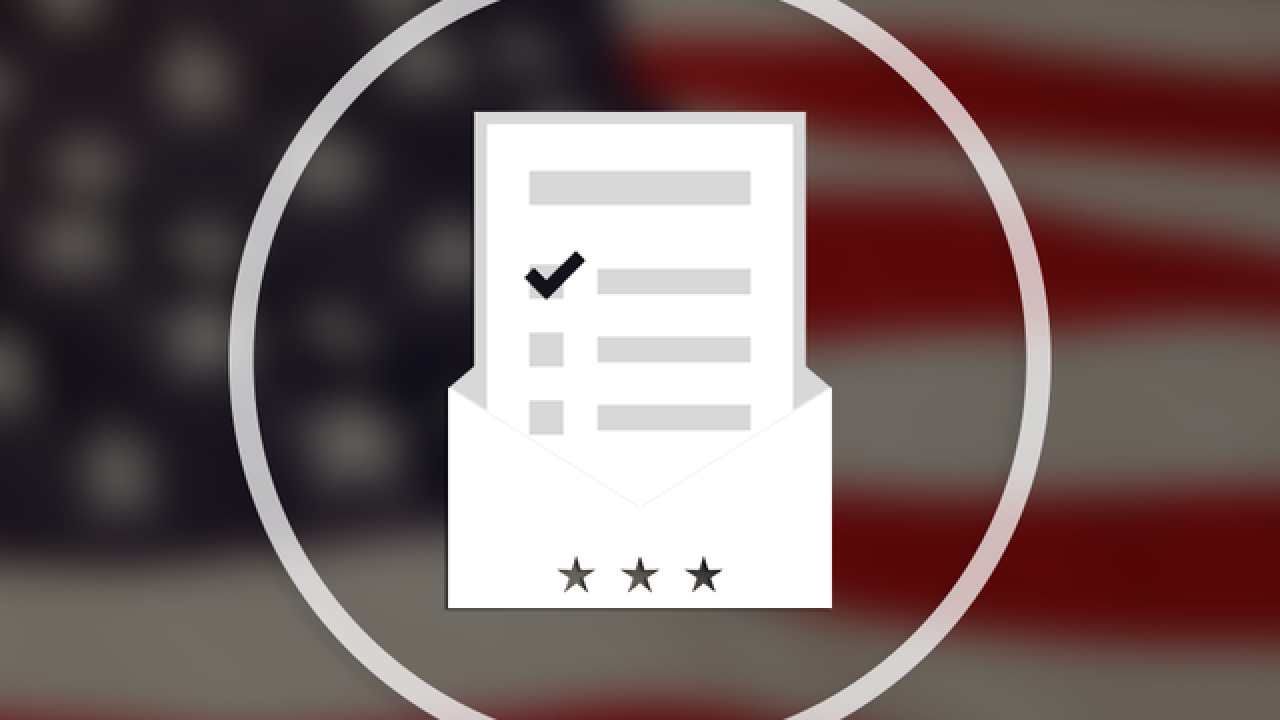 FLORIDA — The latest details of Election Day 2018 as Florida voters decided who the new governor and senator would be (all times local):

President Trump will hold a post-election news conference at 11:30 a.m. at the White House.

I will be doing a news conference at The White House - 11:30 A.M. Will be discussing our success in the Midterms!

Following last night's results of the Florida Commissioner of Agriculture and Consumer Services race between Nikki Fried and Matt Caldwell, and a razor-thin margin of 0.16% or about 12,521 votes, the race is too close to call and now heads into a recount.

The race for U.S. Senate in Florida between Democratic incumbent Sen. Bill Nelson and Republican Rick Scott is too close to call.

Scott’s lead in the Tuesday race is 38,717 votes out of more than 8 million cast — a margin of less than one half of 1 percent.

Under state law in Florida, a recount is mandatory if the winning candidate’s margin is less than 0.5 percentage points.

The Associated Press does not call any race that may proceed to a recount.

Scott earlier declared victory in the race. Nelson has not publicly conceded.

Florida Gov. Rick Scott is declaring victory in a hard-fought and expensive race for U.S. Senate.

Scott told supporters gathered in Naples that the election against incumbent U.S. Sen. Bill Nelson had been “divisive and tough” but he vowed to change the direction of Washington, D.C.

The Associated Press has not yet called the race.

Nelson did not publicly concede the race. Shortly after midnight, his chief of staff took the stage with about a dozen supporters still left and declared Scott the winner based on numerous news media reports. He said Nelson would make a statement later Wednesday and declined to take any questions.

The race for Senate pitted two heavyweights in Florida politics. Scott is a two-term governor who was urged to run by President Donald Trump.

Florida Gov.-elect Ron DeSantis says he won the governor’s race despite the “political and media classes” who had been eager to write his political obituary.

In a victory speech Tuesday night, DeSantis called Election Day “the one day the elites don’t call the shots ... and they don’t set the agenda.”

The 40-year-old former U.S. congressman defeated Democratic Tallahassee Mayor Andrew Gillum, a 39-year-old politician who pulled off an upset when he won the Democratic primary in August.

→ Florida felons will be able to vote again

Republicans on Tuesday held the Senate in the midterm elections and look set to widen their majority, even as the Democrats make major strides towards seizing back the House of Representatives for the first time in eight years.

Republican Ashley Moody has been elected as Florida's next attorney general.

Constitutional Amendment 13 - Florida votes to ban greyhound racing by 2021, signaling possible end of the sport in US.

Voters in St. Petersburg approve Charter Amendment to provide a ten-year lease limitation for the “Pier Building” on the City Park and Waterfront Map.

In response to Tuesday’s results in State Senate District 16, Amanda Murphy released the following statement: “I want to thank our incredible team for their hard work and dedication throughout this campaign,” stated Amanda Murphy. “Our message was always that we can accomplish so much more when we work together than when we lean into those things which divide us. While tonight’s results are obviously disappointing, I am grateful for the opportunity I have had to speak with so many incredible people over the last year. I wish Ed Hooper the best as our next State Senator.”

The Hillsborough County Supervisor of Elections reports that people are still voting in precincts 904 and 908. A large rush came just before polls closed at 7 p.m. More polling booths have been brought in to accommodate.

All polls across the state of Florida have closed.

A line of thunderstorms is disrupting the election-night celebration of Democratic candidate for governor Andrew Gillum.

The Tallahassee mayor decided to hold his election-night party outside on the campus of Florida A&M University. Both Gillum and his wife attended the historic black university.

The heavy rain caused by the storm forced the evacuation of a news media tent because it was collapsing due to the stream of rain pounding down on it.

Gillum supporters and reporters crammed into a student cafeteria as lightning flashed and the rain continued to pour down.

Those backing Gillum, however, remained upbeat and continued to chant Gillum’s slogan “Bring it home” as the thunderstorm continued.

Gillum is running against Republican Ron DeSantis in the race to succeed Gov. Rick Scott.

The Center for Responsive Politics estimates that more than $5.2 billion was spent this cycle, making it the most expensive midterm election in history.

According to the Associated Press, health care and immigration were high on voters' minds as they cast ballots in the midterm elections. Health care was considered the most important issue facing the country in these elections by 26% of people.

A survey conducted by AP showed the majority of voters considered President Trump a factor in their votes. It also found that a majority of voters overall say the country is heading in the wrong direction. However, about two-thirds say economic conditions are good.

Homeland Security Secretary Kirstjen Nielsen says cybersecurity officials are hoping for the best in the midterm election but preparing to react to the worst.

A Florida polling place was put on lockdown for about 40 minutes after a man with a gun was reported in a nearby parking lot.

Palm Bay Police Lt. Steve Bland said passers-by getting into their cars on Tuesday saw the man sitting in his vehicle with a gun on his lap. They called 911 and police arrived as the man was driving out of the parking lot.

A small crowd of supporters chanted, “We want Ron!” He shook hands and thanked supporters before he and his wife, holding their children Madison and Mason, went into the polling place.

Tallahassee Mayor Andrew Gillum and his wife R. Jai voted Tuesday morning at a church in the northside of the city. As he left the polling place, a crowd gathered outside chanting, “Bring it home!”

“I tried to look over to see what she was doing,” Gillum said of his wife while holding their 1-year-old son Davis.

“I voted for you,” she replied.

Gillum talked about how he tried to keep his campaign positive despite attacks from former U.S. Rep. Ron DeSantis and President Donald Trump.

He said that winning “will send a message to Mr. Trump, and Mr. DeSantis as well, that the politics of hatred of division and separation, that they’ve come to an end. At least in this election.”

More than 5.2 million voters cast ballots ahead of Election Day in the battleground state, and records show that Democrats have a slight edge.

New statistics released Tuesday by the state Division of Elections show that more than 2.7 million people voted early, and nearly 2.5 million people have voted by mail.

Democrats have cast more than 2.1 million ballots. Republicans have cast 2.08 million. More than 973,000 voters with no party affiliation have also voted.

This year’s totals far exceed those of 2014 midterms, but are still short of the 6.6 million who voted ahead of Election Day in 2016. In 2014, Republicans edged Democrats in votes cast before Election Day, while Democrats led two years ago in the presidential election. Despite the edge from Democrats in 2016, President Donald Trump won Florida due to a surge of GOP voters on Election Day.

Florida’s more than 13 million registered voters are choosing a new governor and voting on a pivotal U.S. Senate contest.

Andrew Gillum, along with his wife R. Jai, cast his ballot Tuesday morning in Tallahassee at the Good Shepherd Catholic Church.

Among the first in line Tuesday morning was Greg Freeman, who took a red-eye flight from the West Coast to make sure he could vote in his Miami Beach district on Election Day.

Freeman had a list of things that mattered to him as he cast a ballot in the gubernatorial race between former Republican U.S. Rep. Ron DeSantis and Democratic Tallahassee Mayor Andrew Gillum. He cited health care, the ability to tell the truth and human decency.

Freeman voted for Gillum. He said health care is a priority for him because of a pre-existing medical condition. He's already seen his insurance premiums sky-rocket and says he doesn't "want to be in a high-risk pool."

In Little Havana, 34-year-old Enrique Tarrio says he chose DeSantis because the businesses he owns have flourished under Republican Gov. Rick Scott. He says DeSantis is "picking up where Rick Scott left off."

Polls opened Tuesday morning in Florida's Eastern time zone and will open one hour later in the western portion of the Florida Panhandle, which is in the Central time zone. Polls close at 7 p.m. local time.

Many voters took advantage of early voting, which ended Sunday. As of Monday morning, Democrats had a slight advantage of 2.06 million to 2.04 million in votes cast by mail or at early-voting sites.