Gillum advances in quest to be Florida's 1st black governor 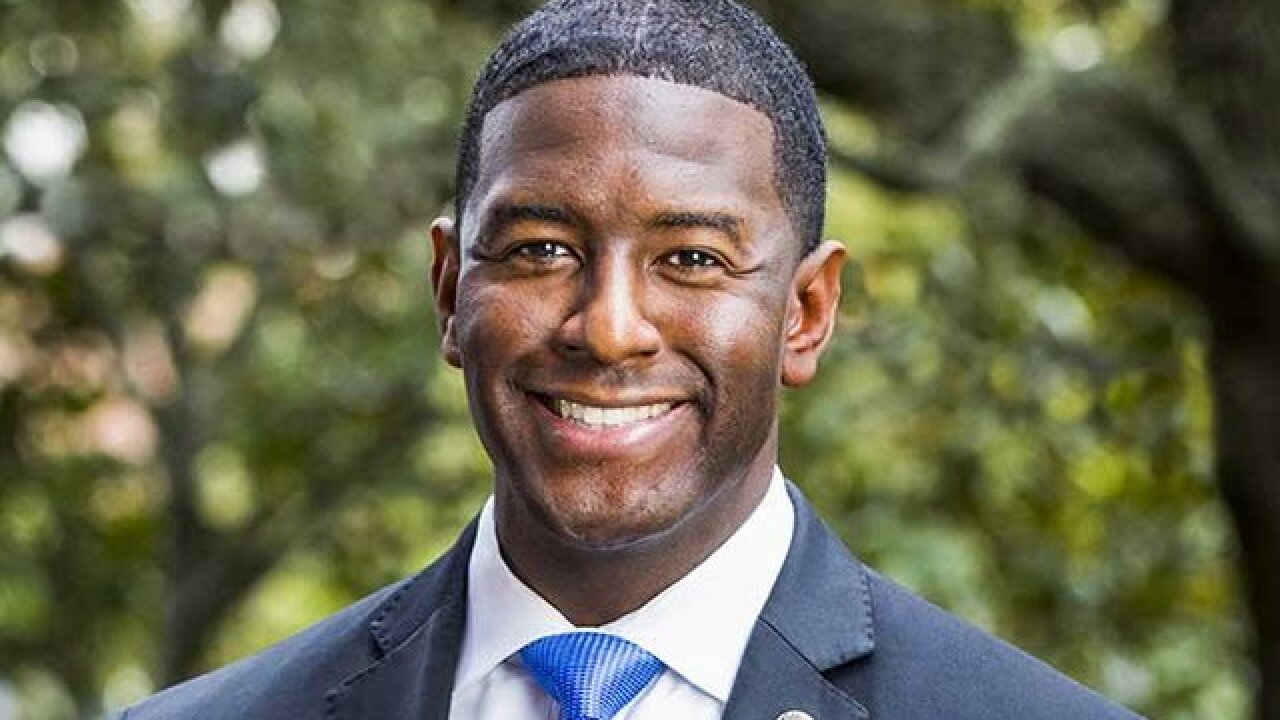 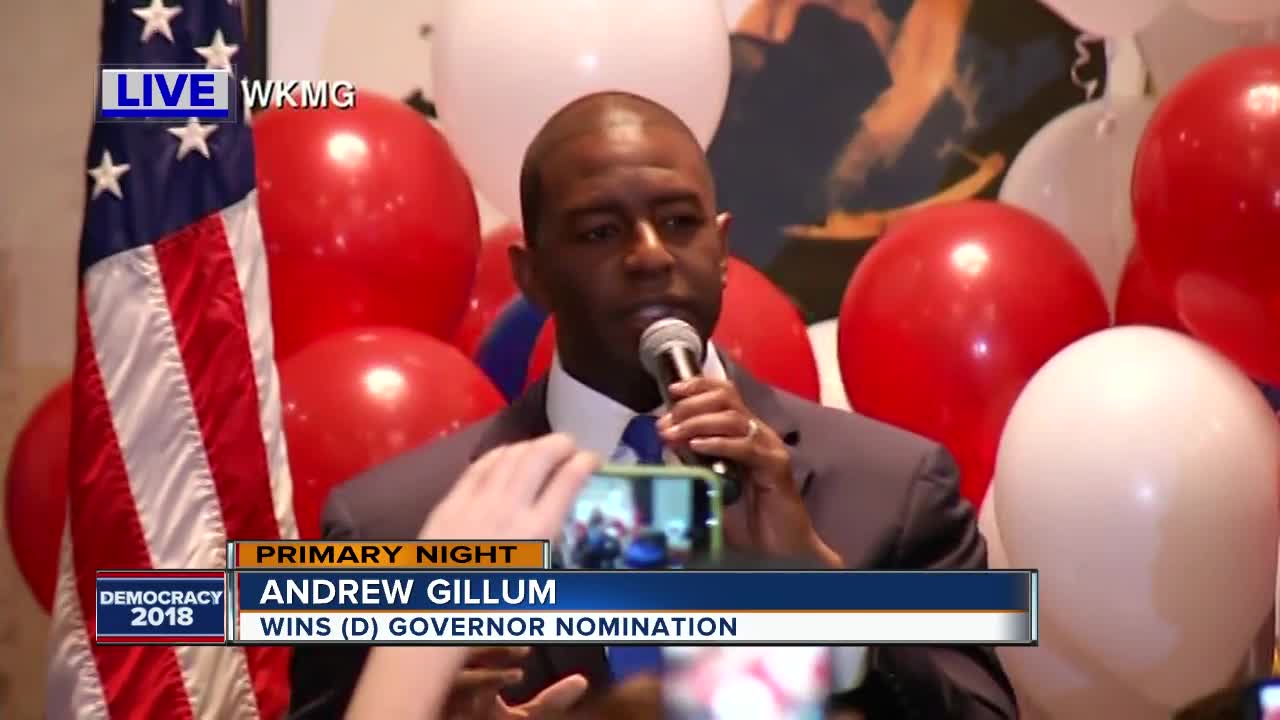 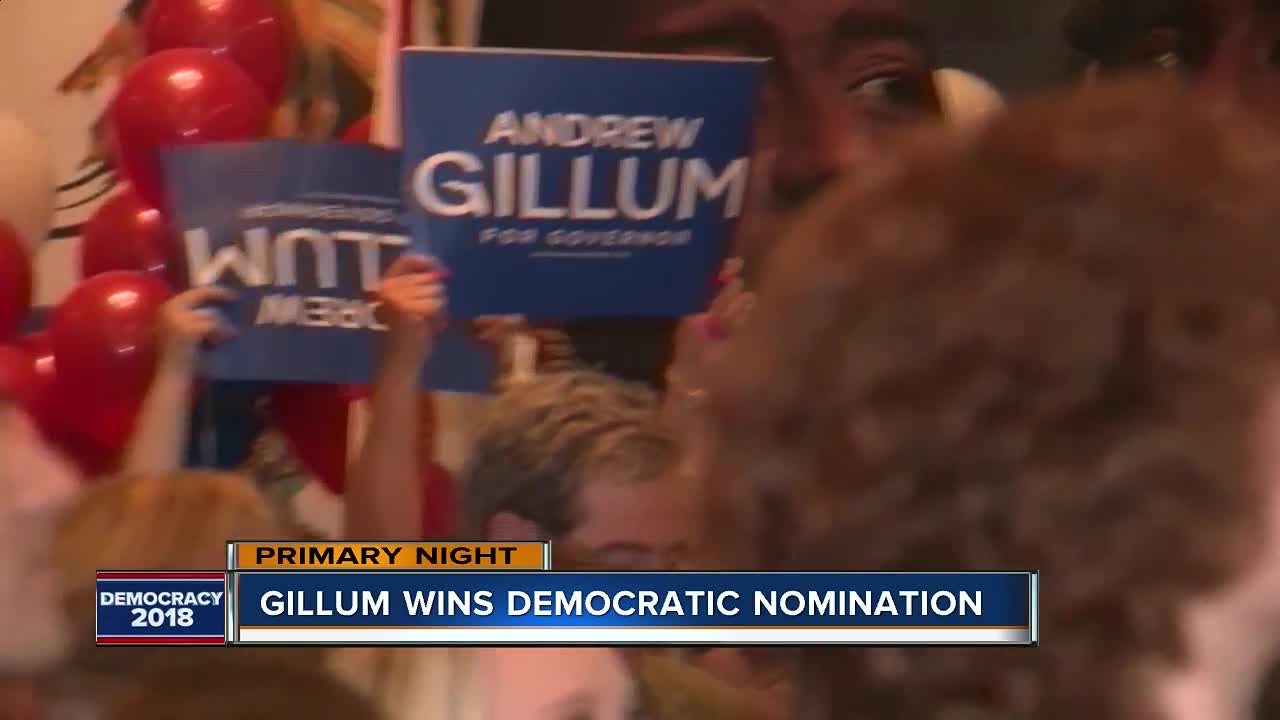 Gillum will now face GOP nominee U.S. Rep. Ron DeSantis in November to replace Republican Gov. Rick Scott. DeSantis sailed to victory in the Republican primary, defeating a longtime favorite of the GOP establishment with a campaign based largely around President Donald Trump.

Gillum spent the least of the five major candidates in his primary race and had the smallest television presence. He relied on a grassroots campaign and the support of the furthest left in the party to beat four other candidates, including former U.S. Rep. Gwen Graham, the daughter of popular former governor and U.S. Sen. Bob Graham.

Gillum, 39, was a favorite among Democrats who call themselves progressives and earned the endorsement of former Vermont Sen. Bernie Saunders. Gillum was a 23-year-old Florida A&M student when he became the youngest person elected to the Tallahassee City Commission in 2003. He was elected mayor in 2014.

Tonight, we proved what's possible when people come together & show up to build FL into a better state for all. I'm truly honored to represent people across the state as the Democratic nominee -- and I promise to stand up for everyday Floridians and the issues that matter most. pic.twitter.com/zC19uMBIer

But the win also comes as the FBI is investigating corruption at city hall. Gillum has said he is not a target in the investigation.

While he didn’t make race an issue, Gillum said it during a recent interview that it would be “big” to be Florida’s first black governor.

“I have been really slow to try to think on it because it’s too big,” he said. “There will absolutely be a part of this that I can’t even put words to around what it might mean for my children and other people’s kids. Especially growing up for them in the age of Donald Trump.”

In the Republican primary, DeSantis beat out Agriculture Commissioner Adam Putnam, who had seemingly built up the run for governor his entire adult life after being elected to office as a 22-year-old.

DeSantis was first elected to Congress in 2012, running as a Washington outsider. His television ads were Trump-focused, including one where his toddler stacks bricks while DeSantis exclaims, “Build the wall!”

The strategy worked, and many voters say that’s what convinced them to support DeSantis.

Sharon Grant said she was planning to vote for Putnam — until Trump weighed in on the race.

“I changed my vote when Trump supported DeSantis,” said the 67-year-old retiree from Pinellas County. “I also loved his commercial, the one with the kids.”

“I believe in Trump’s policies and while I don’t love the way he opens his mouth too much, sometimes saying things that are not quite appropriate, I do believe that in his heart he really means well. He’s doing things the way I like,” Parke said.

DeSantis entered the race a month after Trump’s December tweeted that he would make “a GREAT governor.” Later Trump held a rally for him in Tampa. Suddenly, he was considered the favorite over Putnam, who raised more money, campaigned longer, built support among the party establishment and ran a traditional grassroots campaign.

DeSantis, who turns 40 next month, is a former Navy lawyer. He also ran for Senate in 2016 but dropped out when Republican Sen. Marco Rubio shut down his presidential campaign and decided to run for re-election.

Supporters at DeSantis’ party in Orlando chanted “Ron! Ron! Ron!” when he was declared the GOP nominee Tuesday evening.

“DeSantis rocks!” shouted Jo-Ann Walker, a homemaker from Mount Dora, Florida. “People are starting to wake up and realize what we need for America and that is people who care and who have served and that want to make a better America where we work for it and it’s not just handed to us.”

Gillum and DeSantis will compete for the office held by Scott, who can’t run for re-election because of term limits and is instead challenging Democratic U.S. Sen. Bill Nelson. Scott had an easy win in Tuesday’s GOP primary, and now he heads into an increasingly bitter — and expensive — showdown with Nelson that could play a decisive role in which party controls the Senate