BRUNSWICK, Maine (AP) — An animal rights group wants to build a “roadside memorial” in Maine near the site where a truck crash that spilled 7,000 pounds of live lobster.

People for the Ethical Treatment of Animals (PETA) said they have asked the Maine Department of Transportation for permission to build a tombstone. The tombstone would ask drivers to “Try Vegan.” 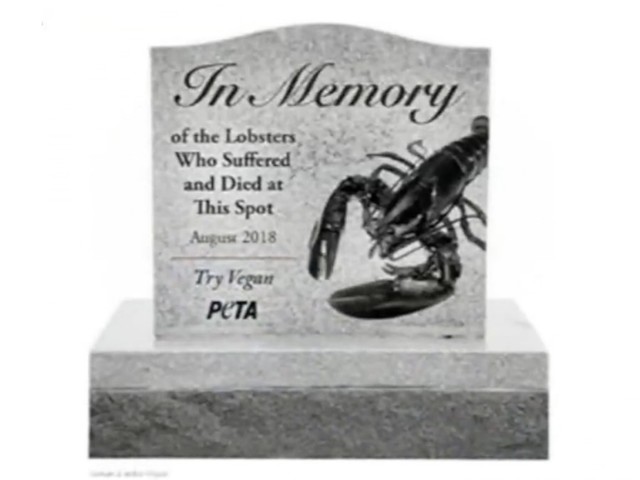 Authorities say the August 22 crash in Brunswick happened when a driver drifted off the right shoulder and hit an embankment on Route 1. The truck was carrying 60 to 70 crates of lobster, and traffic was backed up for hours as crews worked to clean up the crustaceans.

"Some lobsters were loose on the ground from being spilled over and we just kind of went to work and tried to do as much as we could to save the ones we could," said William Moir with the Brunswick Police Department.

"It just seems a little extreme to me. I mean, I am all for animal rights, but I just don't understand putting up a tombstone for some lobsters. I'm sorry," resident Timothy Smith said.

"I'm not cruel to animals, but that goes way too far sometimes. And a monument on the highway, we don't even put monuments up for people who die," Janie Roy added. "What's the difference between them falling on the road and dying or being thrown in boiling hot water? And we eat them every single day. Either way, they're dead lobsters."

PETA said the point of the memorial is to remind people not to eat lobsters or other animals. The group calls lobsters "intelligent individuals who use complex signals to establish social relationships."