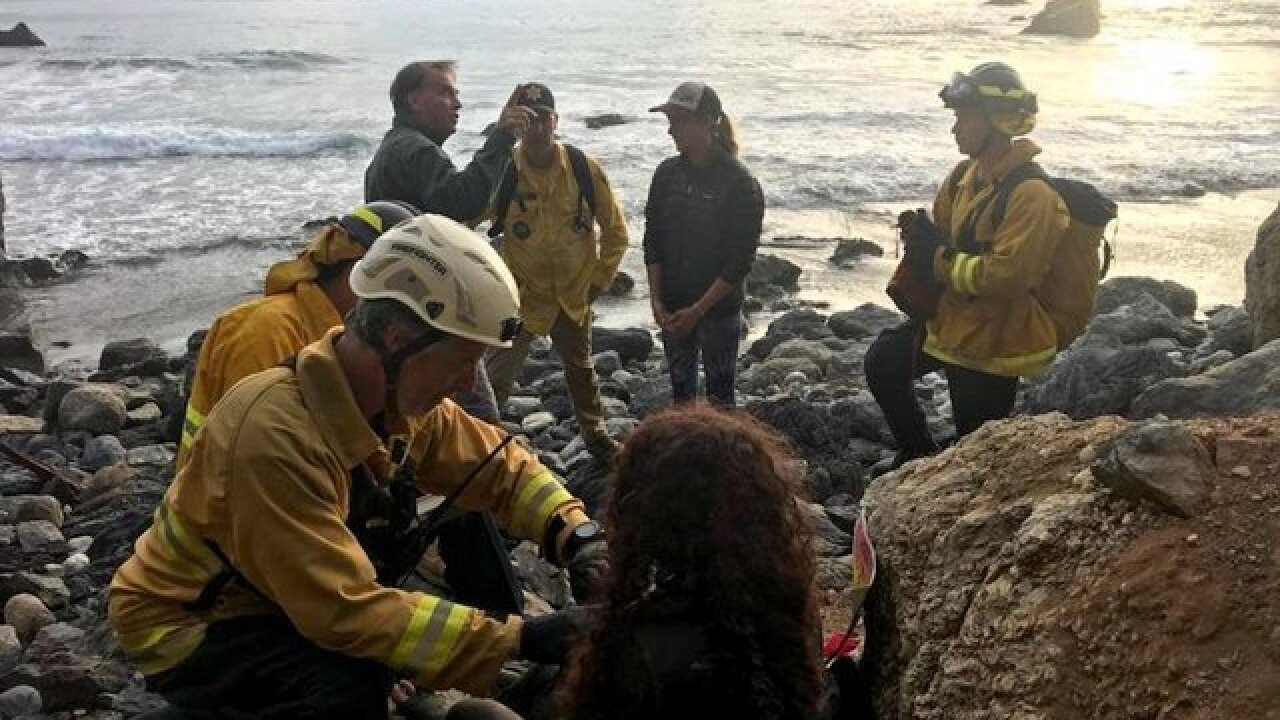 An Oregon woman who disappeared a week ago was found alive at the bottom of an oceanside cliff in Big Sur, California, where she survived in the wreckage of her SUV by using her radiator hose to siphon water from a nearby creek, authorities said Saturday.

Angela Hernandez, 22, of Portland, injured her shoulder but was able to walk and talk, said John Thornburg, public information officer for the sheriff's office in Monterey County, California.

Photos posted on Facebook showed Hernandez sitting on the rocky coastline as she received medical care. She was pulled up by ropes and taken to a hospital, he said, but her condition was not immediately known.

Hernandez's Jeep Patriot apparently ran off Highway 1, the north-south highway that hugs the Pacific coastline. She was driving from Portland to visit family in Lancaster, in Southern California.

She sent a text around 10 p.m. July 5 saying she was tired and stopping to sleep in her car at a grocery store parking lot in Half Moon Bay, in San Mateo County, said a missing persons flier.

About 8 a.m. July 6, she notified her family that she was continuing the drive, the flier said. After that, no more texts were sent. Calls to her cell phone went straight to voice mail.

Law enforcement agencies began looking for Hernandez on July 6, when her family reported that she'd stopped communicating with them. She was a frequent user of social media and the lack of communication was unusual, authorities said.

Authorities determined that Hernandez's vehicle had been in Monterey County about 9:30 a.m. July 6 because it was captured on a business security camera, the San Mateo Sheriff's Office said on Twitter.

The search in Monterey County was hampered on some days by heavy fog, which made air searches difficult or impossible, the sheriff's department said on Twitter.

Late Friday, two people walking in Big Sur noticed the SUV wreckage at the bottom of a cliff, Thornburg said. They went back to their campsite and called 911, he said.

Thornburg said the vehicle landed 200-250 feet down the cliff and was partially submerged. Hernandez may have been able to get out of the SUV, but was stuck in the rocky, inaccessible spot, he said.

He didn't say if Hernandez had any food, but said she survived by using the radiator hose from the vehicle to divert water from a nearby creek.

Isabel Hernandez, her sister, thanked the people who looked for her.

"We just want to thank everybody .. that helped," she told CNN affiliate KGO. "It's day seven and you guys helped us through the whole thing and Angela would not be OK" without you.