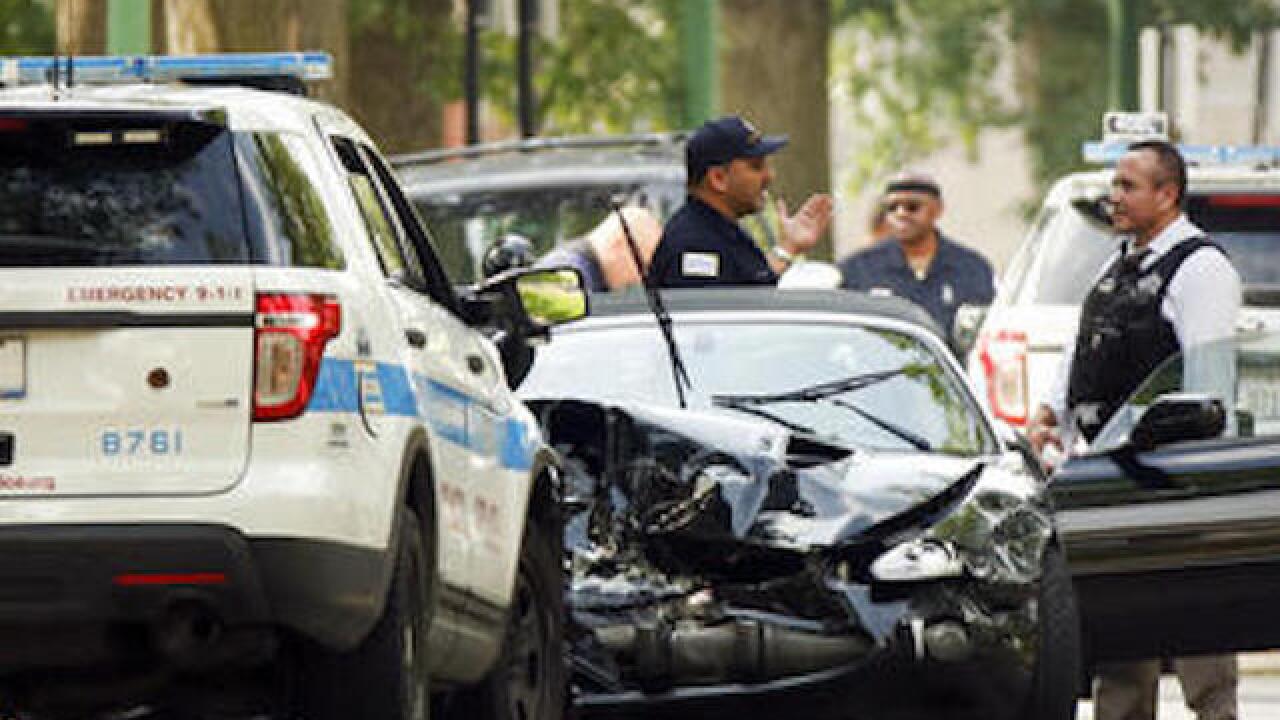 Copyright Associated Press
Jose M. Osorio
<p>In this July 29, 2016 file photo, Chicago police investigate a police- involved fatal shooting in Chicago's South Shore neighborhood. Police say they shot and killed an 18-year-old man who was in a stolen Jaguar that sideswiped a squad car. The public is set to get its first look at videos related to the shooting Friday, Aug. 5, 2016. The release marks the first time the city will make public such material in a fatal police shooting under a new policy that calls for it to do so within 60 days. (Jose M. Osorio/Chicago Tribune via AP)</p>

Officers are seen pursuing Paul O'Neal through a yard and over a fence amid the sound of gunshots. Officers then cuff the suspect, who is face down on the ground with blood on the back of his white shirt.

The fatal shooting isn't seen on any of the videos released Friday because the officer's body camera wasn't recording at the time, police said. An autopsy found O'Neal died from a gunshot wound to the back.

Here is a link to the video via the Chicago Tribune. Warning the video contains graphic language and strong content.

Attorney Michael Oppenheimer, who represents O'Neal's family, said the video showed officers taking "street justice into their own hands". Oppenheimer said O'Neal's family viewed the video Friday morning and it left them distraught, so they left without speaking to the media.

It was the city's first release of video of a fatal police shooting under a new Chicago policy that calls for it to be made public within 60 days. That and other policy changes represent an effort to restore public confidence in the department after video released last year showing Laquan McDonald, a black teenager, shot 16 times by a white officer sparked protests and led to the ouster of the former police superintendent.

The latest recording catches the car being pursued by officers as it blows through a stop sign and smashes head-on into another police cruiser.

More than a half-dozen officers are seen racing between houses into backyards in pursuit of a person who fled from the car.

One officer needs help scaling a wooden gate, while the officer wearing the body camera is unable to climb over and walks around to the rear of another home where other officers have the suspect on the ground.

One officer can be heard saying "I shot. I don't know who was shooting in the alley."

Another officer asks moments later: "They shot at us, too? Right?"

The head of the Independent Police Review Authority, the agency that investigates Chicago police misconduct, called the video "shocking and disturbing."

O'Neal's autopsy results showed he died of a gunshot wound to the back. Police Supt. Eddie Johnson stripped three officers of their police powers after officials said a preliminary determination concluded they had violated department policy in the July 28 shooting.

Police have announced that a body camera of an officer involved in the shooting was not recording at the time.

Police spokesman Anthony Guglielmi said that the department and the police review authority were trying to determine why the body camera wasn't working. He said it is likely because the officer was unfamiliar with how to properly use the camera he only received shortly before the shooting or the camera malfunctioned.

"We don't believe there was any intentional misconduct with body cameras," he said.

The president of the Chicago police officer's union lamented the release of video evidence, saying that it is unfair to the officers, could turn public opinion against them and even jeopardize their own safety.

"These guys live in the neighborhoods, their kids go to school, and their photos will be all over the Internet," he said. "It doesn't mean they did anything wrong but someone may see it and perceive the officers should not have taken the actions they did."

This story has been corrected to reflect that the attorney's name is spelled Oppenheimer, not Oppenheimerk.