US closing in on Olympic gold; beats Spain in men's basketball 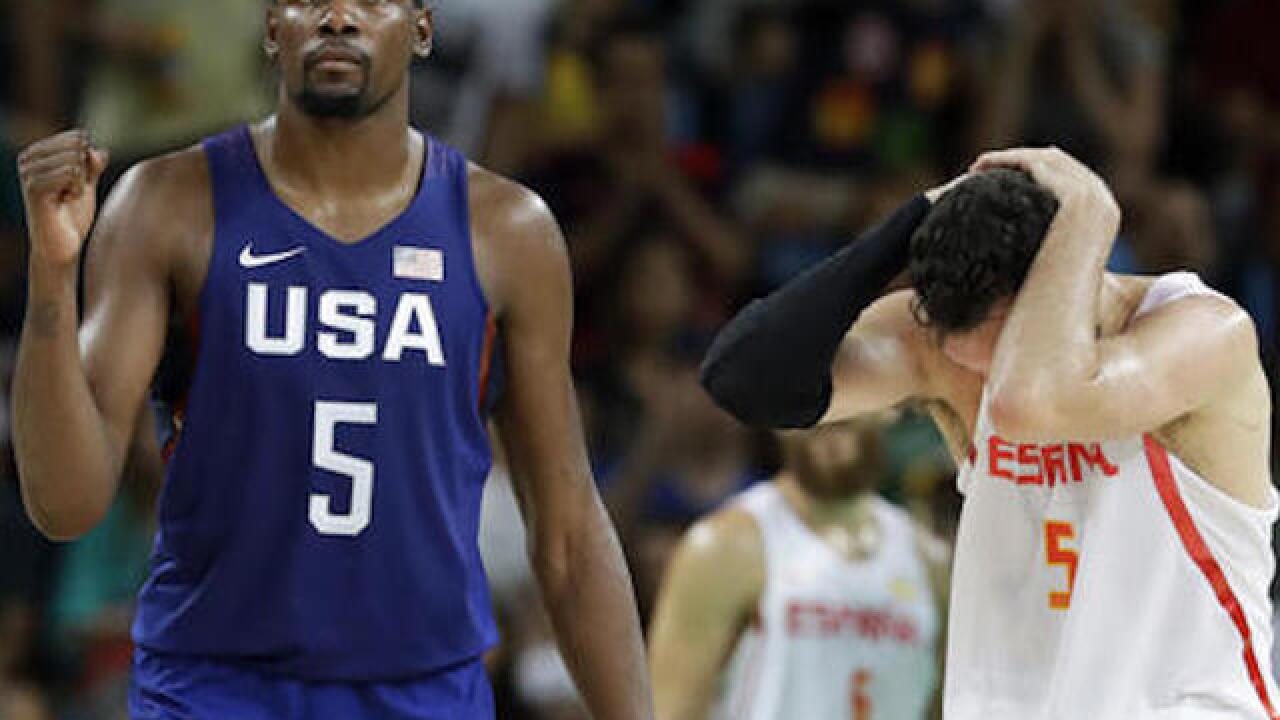 One more win and the Americans are again the best in the world.

The U.S. advanced to its third straight gold-medal game, beating Spain 82-76 on Friday in another tight matchup between the teams that met in the last two championship games.

Klay Thompson scored 22 points for the Americans, who will play Australia or Serbia on Sunday for their third consecutive Olympic title.

The U.S. was just good enough again against Spain, winning a much different game than the all-offense matchups that decided the last two gold-medal games. This one featured several technical fouls and neither team got into an offensive flow.

It was the lowest-scoring game for the Americans in the Olympics since the 2004 semifinals, when they managed 81 in a loss to Argentina.

But DeAndre Jordan made his presence felt in the middle with 16 rebounds and four blocked shots to go with his nine points.

"DeAndre was all over the place," U.S. assistant coach Tom Thibodeau said.

Kevin Durant added 14 points on the day he moved past LeBron James into second place on the U.S. Olympic career scoring list. Kyrie Irving had 13 for the U.S.

Pau Gasol scored 23 points for Spain, which made it tough on the Americans for the third straight Olympics, but again had to settle for coming close against the world's No. 1 team.

Gasol said after he believed Spain missed its best chance to beat the U.S.

"They are not playing as well as other times they've played, but they are still a very talented team individually," Gasol said. "I just (feel) like if we had been a little sharper with our shots, if we would have moved the ball a little better, if we would have boxed out more, and make it a two- or three-possession game, then you're talking about a whole different story."

The Americans pulled away to win 118-107 in 2008 and held on for a 107-100 victory in London. Those were all-action contests, but the defenses made their mark in this one. Spain shot just 39 percent and couldn't get any consistent option other than Gasol, who played with a wrap covering his sore right calf.

It was the kind of defense the Americans thought they could play but hadn't much in the tournament. Serbia and France both surpassed 90 points against them and Australia scored 88, as the team with 10 Olympic newcomers took longer than hoped in grasping international offenses.

This time they contained a team that was as explosive as themselves over the last four games, as Spain had averaged 97.3 points and won by more than 25 per game after dropping its first two in Brazil.

The Americans finally built a comfortable lead when they opened the fourth quarter with six straight points to go ahead 72-57. But Spain was able to keep the gap from getting any bigger and chipped away at it in the final minutes, the margin ending up smaller than in the previous matchups.

Thompson scored 17 in the first half, including a 3-pointer with 26 seconds left that made it 45-39 at the break.

Both teams were called for multiple technical fouls in the tense first half. One of them, on Durant, gave him a third foul, as technicals also count as personal fouls in international play. Nikola Mirotic then picked up a personal and technical on the same play later in the period, sending him to the bench with four after he led Spain with 23 points in its quarterfinal rout of France.

The Americans were far off their usual offensive play, shooting only 42 percent for the game and complaining about a wet ball in the first half. But they grabbed 21 offensive rebounds in their 24 straight victory in the Olympics.