<p>President Donald Trump is doubling down on his proposal to arm teachers. He claims it could prevent school shootings.</p><p>In&nbsp;<a href="https://twitter.com/realDonaldTrump/status/966657362789568512" target="_blank">a series of tweets</a>&nbsp;Thursday, Trump said in part: &quot;Highly trained, gun adept, teachers/coaches would solve the problem instantly, before police arrive. GREAT DETERRENT!&quot;</p><p>Trump brought up the idea Wednesday&nbsp;<a href="https://www.newsy.com/stories/trump-held-listening-session-on-school-safety-after-shooting/" target="_blank">during a listening session</a>&nbsp;with those affected by school shootings.</p><p>&quot;If you had a teacher with, who was adept at firearms, they could very well end the attack very quickly,&quot;&nbsp;&nbsp;Trump said. &quot;... I really believe that if these cowards knew that the school was well-guarded, from the standpoint of having, pretty much, professionals with great training, I think they wouldn&#39;t go into the school to start off with.&quot;</p><p>Many of those at the sessions expressed support for the suggestion. But critics, including some teachers,&nbsp;<a href="https://www.huffingtonpost.com/entry/trump-vs-teachers-guns-in-school_us_5a8e524de4b0617d4639e07c" target="_blank">pushed back</a>&nbsp;against the idea, arguing educators should be armed with ways to prevent school shootings, not with weapons.</p><hr><b>Trending stories at <a href="http://www.newsy.com">Newsy.com</a></b><ul class="inline-related-links"><li><a href="http://www.newsy.com/stories/rep-claudia-tenney-said-mass-murderers-are-democrats/">Rep. Tenney Said Mass Murderers &#039;End Up Being Democrats&#039;</a></li><li><a href="http://www.newsy.com/stories/pennsylvania-gop-asks-scotus-to-block-new-congressional-map/">Pennsylvania Republicans Ask SCOTUS To Block New Congressional Map</a></li><li><a href="http://www.newsy.com/stories/students-debate-guns-and-school-safety-at-the-white-house/">Students Debate Guns And School Safety At The White House</a></li></ul>

Washington (CNN) — President Donald Trump, after listening to a series of emotional stories and pleas to enhance school safety at the White House Wednesday, floated the idea of arming teachers and school staff, an idea that was met with support from many of the attendees.

"If you had a teacher who was adept with the firearm, they could end the attack very quickly," he said, stating that schools could arm up to 20% of their teachers to stop "maniacs" who may try and attack them.

"This would be obviously only for people who were very adept at handling a gun, and it would be, it's called concealed carry, where a teacher would have a concealed gun on them. They'd go for special training and they would be there and you would no longer have a gun-free zone," Trump said. "Gun-free zone to a maniac -- because they're all cowards -- a gun-free zone is 'let's go in and let's attack because bullets aren't coming back at us.'"

The comment came during a White House listening session marked by poignant testimony from students and parents affected by school shootings. Trump offered some solutions, calling for more mental institutions and hospitals in addition to the idea of arming teachers.

"I'm not here to debate, but I lost my sister. And like Mr. President said, if you could find 20% of maybe retired law enforcement officers, or a teacher who could go through discreet training to carry a firearm around his waist, it could've been a very different situation," Hunter Pollack, one of Meadow Pollack's brothers, said. "We need more security, we need more firearms on campus, we need better background checks, and we need to study more on mental health."

Fred Abt, father of Parkland shooting survivor Carson Abt, said he had discussed with Education Secretary Betsy DeVos over lunch that rather than waiting for first responders to arrive, it would be more efficient to have firearms locked on school campuses.

"One possible solution, which may not be very popular, would be to have people in the school, teachers, administrators who have volunteered to have a firearm safely locked in the classroom who are given training throughout the year," he said. "There are plenty of teachers who are already licensed to carry firearms, have them raise their hands to volunteer for the training, and when something like this starts, the first responders are already on campus."

But not all agreed with that approach.

Nicole Hockley, whose six-year-old son was killed in the 2012 Sandy Hook elementary school shooting, took the microphone and told Trump she would rather arm teachers with ways to prevent shootings in the first place rather than with a firearm.

"Let's talk about prevention," Hockley said. "There is so much we can do to help this person before we reach this point."

But many others embraced the President's idea.

Andrew Pollack, a father of one of the 17 victims who died in last week's Florida shooting, said he was speaking Wednesday because his daughter couldn't.

"We as a country failed our children," he said. "This shouldn't happen."

He asked how it was that America could protect its airports, its concerts, its embassies and even the elevators at the Department of Education, but not its schools.

"How many schools, how many children have to get shot? It stops here with this administration and me. I'm not going to sleep until it is fixed. And Mr. President, we'll fix it. Because I'm going to fix it. I'm not going to rest," he said.

"My beautiful daughter, I'm never going to see her again. It's simple. Let's fix it," he said.

Justin Gruber, 15, who was affected by the Parkland shooting, said he was born after Columbine, which marked a new era in school safety.

"I was born into a world where I never got to experience safety and peace. There needs to be a significant change in this country. This has to never happen again," he said. "People should be able to feel like when they go to school it can be safe. There needs to be a change. People need to feel safe. Parents shouldn't have to go through the idea of losing their child."

Trump responded to the series of emotional stories from the survivors and parents of victims from the shooting at Marjory Stoneman Douglas High School by pledging to get to work on school shootings "two minutes" after the listening session.

"We don't want others to go through the kind of pain you have gone through," Trump said. "It wouldn't be right."

Trump, flanked by the students, went around the room and shook hands before opening the event. 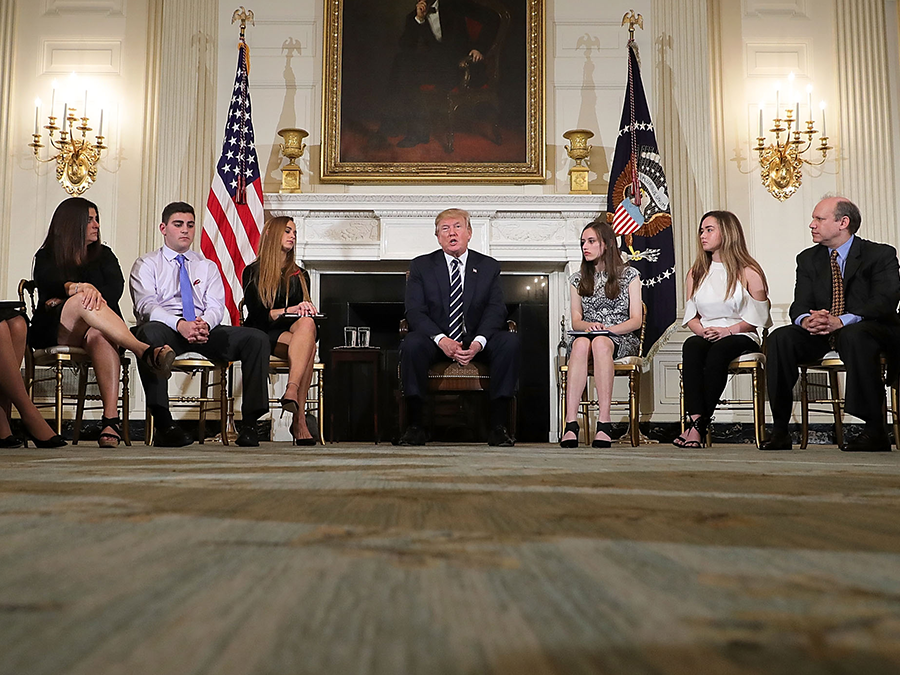 Trump also later tweeted he would "always remember" the event, adding "we must keep our children safe."

"I will always remember the time I spent today with courageous students, teachers and families," he posted to Twitter, along with a link to the full event. "So much love in the midst of so much pain. We must not let them down. We must keep our children safe!!"

I will always remember the time I spent today with courageous students, teachers and families. So much love in the midst of so much pain. We must not let them down. We must keep our children safe!!

The event, hosted in the White House's State Dining Room, brought Trump face-to-face with students and parents who have demanded action on gun violence. The President -- who was elected with the support of the National Rifle Association -- has so far expressed support for regulating bump-fire stocks, which make it easier to fire rounds more quickly, and strengthening background checks for gun purchases.

The event comes a week after 17 people were killed at the shooting in Parkland, Florida, a massacre that has led students, parents and teachers from the school to call on Trump to take action. Students led protests in front of the White House over the weekend and another group of students walked out of schools on Wednesday gathered in front of the White House to demand action.

To date, the Trump administration has stuck to discussing taking action on guns, not actually lobbying Congress on moving any new legislation. But White House deputy press secretary Raj Shah said in a statement on Monday that Trump spoke with Sen. John Cornyn, a Texas Republican, on Friday about a bill he introduced with Sen. Chris Murphy, a Connecticut Democrat, that aims to strengthen how state and federal governments report offenses that could prohibit people from buying a gun.

"While discussions are ongoing and revisions are being considered, the President is supportive of efforts to improve the federal background check system," Shah said. Students, teachers and lawmakers have urged Trump and other Republican lawmakers to take action on guns in the wake of the Parkland shooting.

Any action on guns would be a balancing act for Trump. His political base of Republican voters overwhelmingly disapprove of most gun control actions and the President has enjoyed the support of the NRA.

Trump has not always been deeply tied to the NRA, though.

"I generally oppose gun control, but I support the ban on assault weapons and I support a slightly longer waiting period to purchase a gun," he wrote in his 2000 book, "The America We Deserve." "With today's Internet technology, we should be able to tell within 72 hours if a potential gun owner has a record."

Trump disavowed those statements during the 2016 campaign.

Polls have found, however, that most Americans blame Trump and Congress for not doing more on guns. A new Washington Post/ABC News poll released Tuesday found that 62% of respondents said Trump is not doing enough to prevent mass shootings and 77% say Congress is doing an inadequate job on the issue.

Trump vowed Wednesday that his administration would look strongly into gun purchase ages, as well as the "mental health aspect."

He thanked the students and the parents who participated, saying, "We're fighting hard for you and we will not stop... I just grieve for you, I feel so -- to me, there could be nothing worse than what you've gone through."

He continued, "Thank you for pouring out your hearts because the world is watching and we're going to come up with a solution."