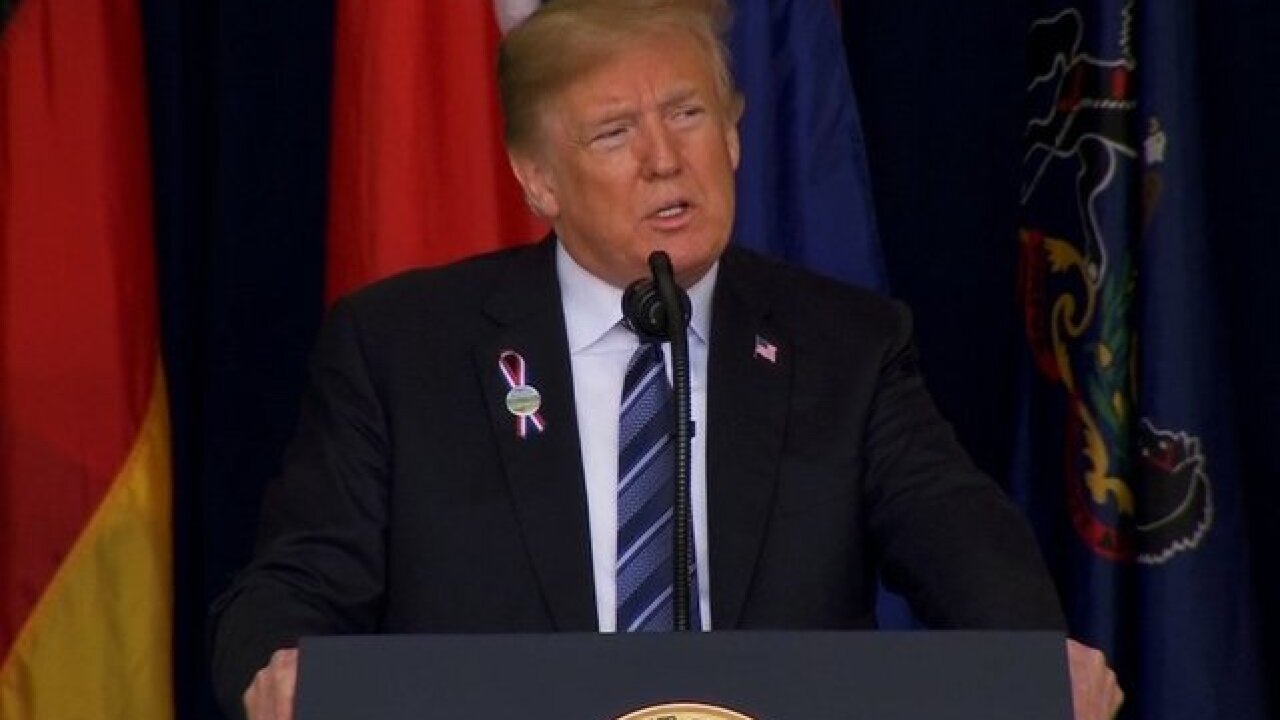 President Donald Trump paid sober tribute to victims of crashed Flight 93 in Pennsylvania on Tuesday, the anniversary of the September 11 terrorist attacks.

"This field is now a monument to American defiance," Trump said in remarks near where the aircraft went down 17 years ago. "This memorial is now a message to the world: America will never, ever submit to tyranny."

It was a message of defiance in the face of terrorism, delivered by a New Yorker president who has at times struggled to adopt the role of consoler in chief.

The President began the day on a combative streak, tweeting angrily about the Russia investigation from the White House as mourners were gathering in lower Manhattan, at the Pentagon and in the Pennsylvania field where Flight 93 crashed 17 years ago.

When he arrived in Pennsylvania with the first lady, Trump flashed a celebratory smile and pumped his fists as he greeted supporters on the tarmac in Johnstown, Pennsylvania.

By the time he'd made his way to Shanksville, where family members of victims had gathered to remember their loved ones, the President had assumed a solemn demeanor and pinned a remembrance ribbon on his right lapel.

He watched from stage as a bell tolled and the names of the victims were read aloud by their survivors.

When he stood to speak, Trump stuck tightly to the script, hailing the passengers of the San Francisco-bound flight as courageous and patriotic Americans. The 40-odd passengers and crew attempted to take back control of the plane from the hijackers when they learned of the ongoing terror attacks at the World Trade Center in New York and at the Pentagon.

When the plane crashed in Shanksville, all were killed. Later, investigators determined the terrorists planned to fly the aircraft into either the US Capitol or the White House.

"They boarded the plane as strangers, and they entered eternity linked together forever as true heroes," Trump said.

The aftermath of the 9/11 terror attacks still weighs on Trump's presidency, nearly two decades after the planes stuck their targets. Like his two predecessors, he has wrestled with a strategy for the US war in Afghanistan. And he continues to battle global terrorism.

Trump said Tuesday his administration is "facing down the menace of radical Islamic terrorism," using a controversial phrase that he's insisted is necessary to accurately define the enemy.

But he also offered a vision of the country not defined by the 17-year-old attacks.

Trump has sometimes awkwardly assumed the consoler role required of presidents in the course of his year-and-a-half in office. Often, he imbues his attempts at comfort with self-praise or non-sequiturs.

Those were absent in his remarks on Tuesday, but his messages earlier in the day focused more on his ongoing frustration with the Russia investigation.

His early Twitter messages quoted Fox News television segments that were aired the previous night, suggesting he was rewatching the programming as he prepared to depart for the anniversary celebrations.

The President then offered a mix of remembrance and grievance about the ongoing Russia probe.

"Rudy Giuliani did a GREAT job as Mayor of NYC during the period of September 11th. His leadership, bravery and skill must never be forgotten. Rudy is a TRUE WARRIOR!" Trump wrote.

Earlier, it was the Justice Department and FBI on Trump's mind, prompted by segments on Fox.

"New Strzok-Page texts reveal 'Media Leak Strategy,'" Trump wrote, citing the conservative news channel. "So terrible, and NOTHING is being done at DOJ or FBI - but the world is watching, and they get it completely."