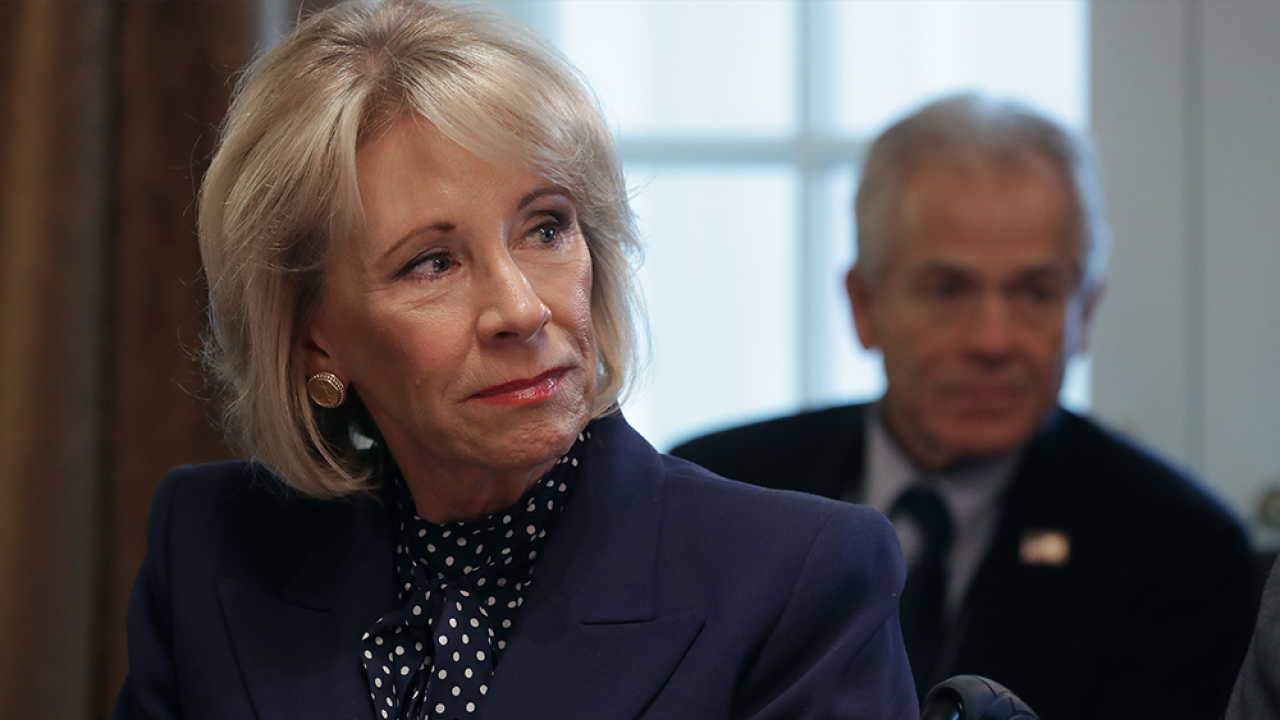 The Trump administration is looking to decrease the Education Department’s funding by $7.1 billion compared to what it was given last year, as part of next year’s proposed budget.

The budget proposal suggests eliminating 29 programs, including after-school and summer programs for students in high-poverty areas, among other things.

The budget proposal is unlikely to pass through Congress – especially with Democrats in control of the House, however, it is a glimpse into the Trump administration’s priorities going into the next fiscal year.

She also said the “budget at its core is about education freedom,” an apparent nod to the issue of school choice – something DeVos has attempted to champion during her time as head of the department.

The proposed budget includes DeVos’ school choice platform by asking for an increase in $60 million for the Charters Schools Program.

The budget also requests $700 million for school safety measures from multiple agencies, including the Education Department, the Justice Department and Health and Human Services.

“After the tragedy in Parkland, Florida, the President established the Federal Commission on School Safety to assess and develop Federal, State, and local policy recommendations to help prevent violence in schools,” the 2020 budget proposal reads.

“The Budget provides approximately $700 million, an increase of $354 million compared to the 2019 Budget, in Departments of Education, Justice, and Health and Human Services grants to give States and school districts resources to implement the Commission’s recommendations, such as expanding access to mental healthcare, developing threat assessments, and improving school climate.”

American Federation of Teachers President Randi Weingarten issued a statement responding to the proposed cuts, criticizing the DeVos’ leadership at the department.

“Rather than increase funding for kids with special needs or for those who live below the poverty line in both rural and urban America, or addressing the issues raised in their own safety report, DeVos once again seeks to divert funding for private purposes in the name of ‘choice,’” Weingarten said.

The statement continued: “However, if they listened to parents, they would hear that, overwhelmingly, parents want well-funded public schools as their choice.”

Washington Sen. Patty Murray, the ranking Democrat on the Senate Committee on Health, Education, Labor and Pensions, also criticized the budget’s Education Department proposals, saying it showed “how wildly out of sync” DeVos is.

“Secretary DeVos is proposing gutting investments in students, teachers, public schools, and even school safety—all to make ro for her extreme privatization proposal that no one asked for. This is not a serious budget proposal, and I am going to once again work with Republicans in Congress to ensure every student has access to a quality public education in their neighborhood,” Murray’s statement said.