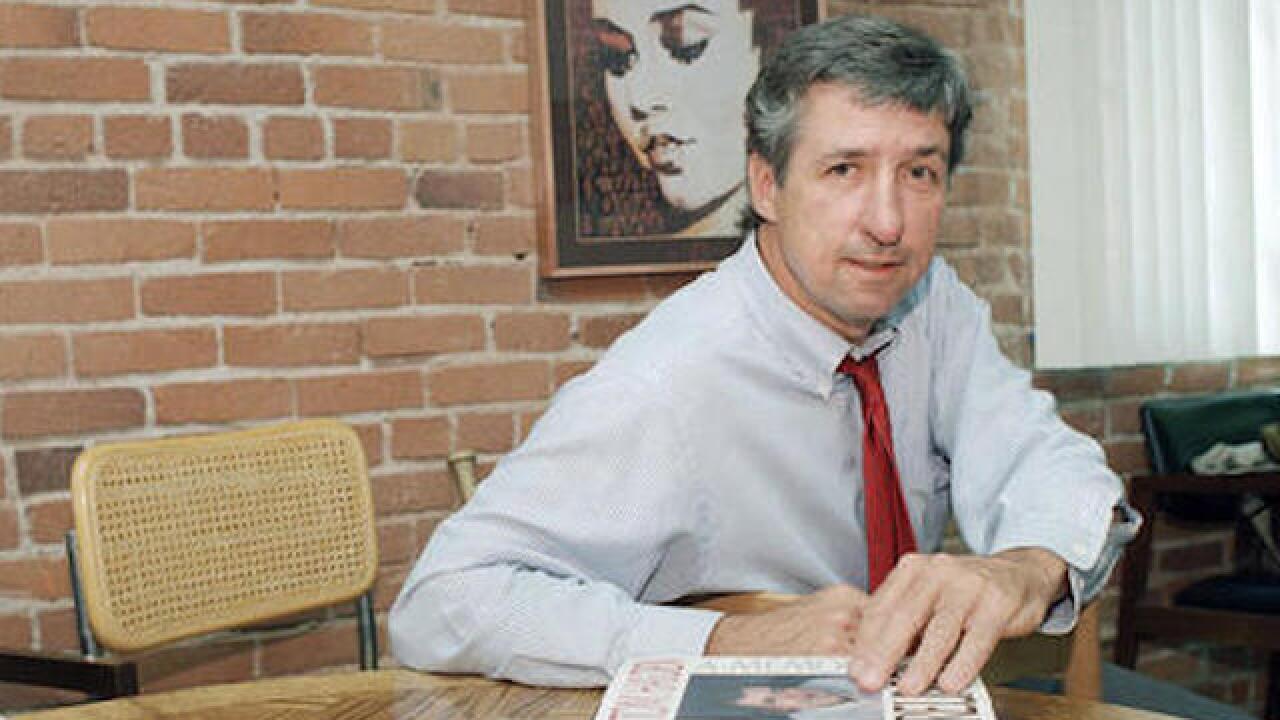 Copyright Associated Press
Lennox McLendon
<p>In this June 6, 1988 file photo, Tom Hayden talks about his new book, "Reunion," during a interview at his office in Santa Monica, Calif. Hayden, the famed 1960s anti-war activist who moved beyond his notoriety as a Chicago 8 defendant to become a California legislator, author and lecturer, has died. He was 76. His wife, Barbara Williams, says Hayden died on Sunday, Oct. 23, 2016, in Santa Monica of a long illness. (AP Photo/Lennox McLendon)</p>

SANTA MONICA, Calif. (AP) — Tom Hayden was long past his heyday of political rebellion and the Chicago 7 trial when he died on Sunday at age 76. But in American culture, he remained an enduring symbol of a time when young people took history into their own hands.

Hayden reinvented himself many times, moving from the streets in the 1960s to the halls of California government in the 1970s, going from a longhaired protester who stunned many by marrying glamorous actress Jane Fonda to a lawmaker in a suit and tie.

But even when his hair turned white, he never escaped his past.

Hayden's 1960s were a decade of dissent marked by civil rights sit-ins, anti-war marches, the Chicago riots and scenes of kids being tear-gassed and clubbed on American campuses.

He spoke many times about the era that planted his name in the American consciousness as a radical firebrand, anti-Vietnam War protester and defendant in the Chicago 7 conspiracy trial.

"Rarely, if ever, in American history has a generation begun with higher ideals and experienced greater trauma than those who lived fully the short time from 1960 to 1968," he wrote in his autobiography "Reunion."

Hayden sometimes wished aloud that he could move beyond that relatively brief, explosive time when his image was set in stone.

"I can't get past that," he said in 2008. "... I can be like 68 years old and I'm still trouble because (people are) thinking about something in Vietnam or they're thinking about Jane Fonda."

Less remembered were the 19 books he wrote, the countless lectures, the blog posts, the 100-plus legislative bills he shepherded to approval or his advocacy for the environment.

His story began in America's heartland — Royal Oak, Michigan — where Thomas Emmet Hayden was born on Dec. 11, 1939, into a middle-class family. He attended the University of Michigan at Ann Arbor, a hotbed of student politics. It was there that he cast his lot with the counterculture movement.

He took up political causes, including the civil rights movement, wrote fiery editorials for the campus newspaper and contemplated a career in journalism. But upon graduation, he turned down a newspaper job.

He wrote in his memoir: "I didn't want to report on the world; I wanted to change it."

In 1960, the year that he graduated, he was involved in formation of Students for a Democratic Society (SDS), then dedicated to desegregating the South. By 1962, he became one of the key authors of its landmark Port Huron Statement, a call to students on campuses everywhere to take up political protest.

"We are people of this generation, bred in at least modest comfort, housed now in universities, looking uncomfortably at the world we inherit," began the statement, which outlined a plan for a revolutionary campus social movement.

Hayden was fond of comparing the student movement that followed to the American Revolution and the Civil War.

He went freedom riding for civil rights in the South and was beaten and briefly jailed in Mississippi and Georgia. He married a fellow activist, Sandra "Casey" Cason, and together they witnessed the violence of the battle against segregation.

Yearning for a more influential role, Hayden returned to Ann Arbor to work on the Port Huron Statement.

"I didn't want to go from beating to beating, jail to jail," he wrote. "... There was an entire generation to arouse, primarily about civil rights but also about the larger issues."

The largest issue at the time was the Vietnam War. In 1965, Hayden made his first visit to what was then North Vietnam with an unauthorized delegation. In 1967, he returned to Hanoi with another group and was asked by North Vietnamese leaders to bring three prisoners of war back to the United States. With the prisoners suffering medical problems, the U.S. State Department thanked Hayden for his humanitarian action.

Firmly committed to the anti-war movement, Hayden participated in sit-ins at Columbia University, then began traveling the country to promote a rally in Chicago for the 1968 Democratic National Convention. It became a turning point in his life.

A single event galvanized him — the 1968 assassination of his friend, Sen. Robert F. Kennedy, in Los Angeles.

"I went from Robert Kennedy's coffin into a very bleak and bitter political view," Hayden recalled in an Associated Press interview in 1988. "I think it confirmed for me that there was no future and brought out a lurking belief that this was a really violent country and that I was headed into apocalyptic times."

Police assaults on student demonstrators in Chicago seemed to confirm his belief. The violence resulted in the circus-like Chicago 7 trial.

"The radical pressure caused the reforms," Hayden said. "But it's fair to say the system reformed itself."

In 1971, Hayden met Jane Fonda who was a latecomer to the protest movement.

"She came from the orbits of fame, power and success. A popular actress and the daughter of Henry Fonda, she burst like a dislocated star onto the movement scene ... but came only slowly and haltingly into my life," he wrote.

After he heard her give an eloquent anti-war speech in 1972, Hayden said they connected and became a couple. He was divorced from Cason by then and Fonda was divorced from director Roger Vadim and had a daughter, Vanessa Vadim.

"I was 32, she 34, both of us were starting over," he wrote. "The passion of our common involvement no doubt caused our involvement in passion for each other."

He acknowledged ruefully that their marriage in 1973 may have appeared to some as "a remake of 'Beauty and the Beast.' "

He was a rumpled longhaired activist who still cast himself as an outsider. She was a glamorous, world-famous movie star and heiress to a Hollywood dynasty. They were married for 17 years and had a son, Troy.

Both Hayden and Fonda were demonized by the political right after she visited North Vietnam in 1972 and was photographed posed on a North Vietnamese anti-aircraft gun. It took many decades to minimize her "Hanoi Jane" moniker.

Hayden once expressed regret about his past. In a 1986 piece he wrote for the Los Angeles Times, he said: "I regret most of all that I compounded the pain of many Americans who lost sons and loved ones in Vietnam. ... I will always believe the Vietnam War was wrong. I will never again believe that I was always right."

In the late 1970s, Hayden plunged into mainstream politics, winning election to the California Assembly. He also served in the state Senate before stepping down in 2000. He ran unsuccessfully for Los Angeles mayor and California governor.

In later years, he focused on writing, teaching and lecturing. Hayden married actress Barbara Williams, and they had a son, Liam.

He acknowledged contentment with his later life but confided that nothing would ever match the excitement of his early years.

"Whatever the future holds and as satisfying as my life is today," he wrote, "I miss the '60s and I always will."