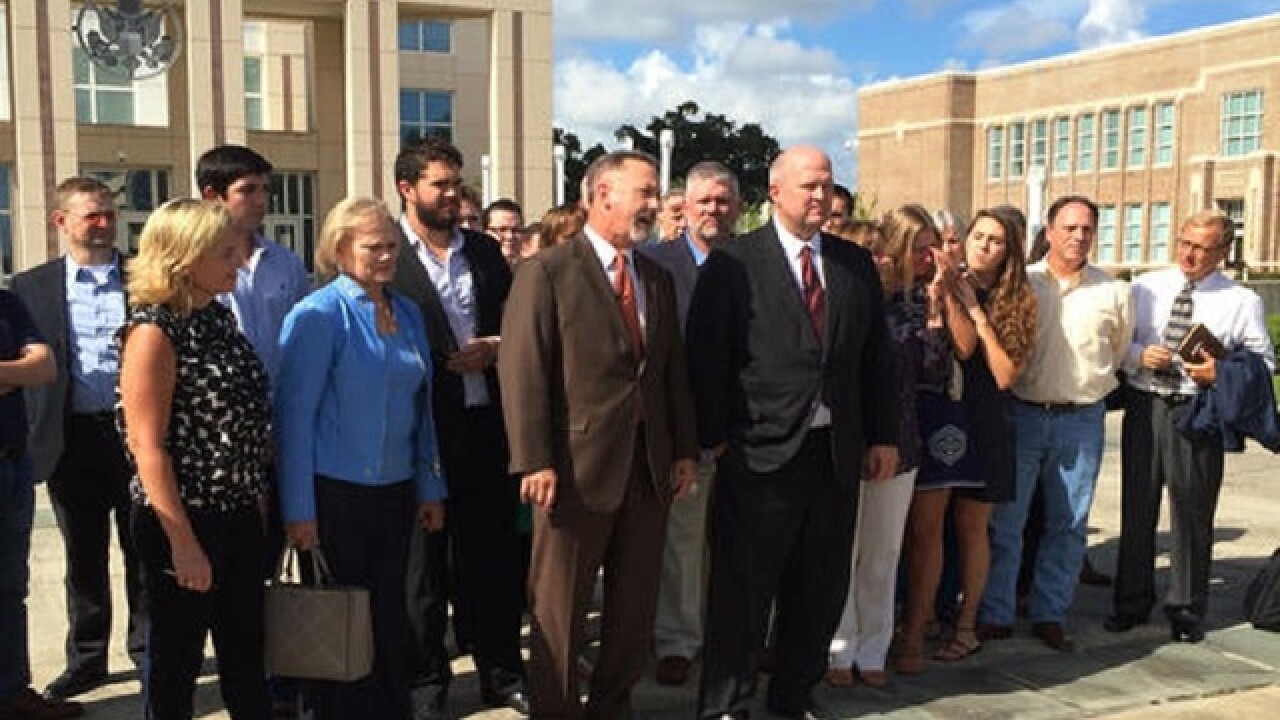 Hugh Keeton
<p>Mikal Watts (black suit, center right) and his brother's lawyer Michael McCrum (brown suit, center left) discuss acquittals Thursday, Aug. 18, 2016, outside the Gulfport, Miss., federal courthouse in a case alleging Mikal and David Watts and others had falsified a list of clients to sue BP after the 2010 Gulf of Mexico spill. The Watts brothers and three others were acquitted on 66 charges, while two people who ran the Mississippi office seeking clients were convicted on all charges (Hugh Keeton/WLOX-TV via AP)</p>

By: Associated Press
Posted at 9:31 PM, Aug 18, 2016
JACKSON, Miss. (AP) — A Texas lawyer accused of making up fake clients to sue BP after the 2010 Gulf of Mexico Oil spill said after his acquittal Thursday that the government's case against him "fell apart under its own weight of ridiculousness."
Attorney Mikal Watts of San Antonio and four others were acquitted Thursday by a federal jury in Gulfport, Mississippi, of 66 charges of mail fraud, wire fraud and identity theft. They had been accused by prosecutors of making up names or stealing personal information for a list of 40,000 people with claims against the energy giant following the massive spill.
Two people were convicted of the 66 charges — Gregory Warren of Lafayette, Louisiana, and Thi Houng "Kristy" Le of Grand Bay, Alabama.
In a telephone interview with The Associated Press, Watts said he and those closest with him were not criminals but victims of a fraud perpetrated by the two convicted, whom he hired to sign up clients. Blaming them was part of his defense.
Earlier Thursday, Watts and the six other defendants sat in the courtroom as jurors plowed through the long list of charges, taking 15 minutes or more to render a complete verdict for each person.
"It was pretty stressful, 66 counts," Watts said.
Authorities said Watts and other investors had spent nearly $11 million to compile the massive list, but it was riddled with errors, including names of the dead, people who never gave permission for Watts to represent them and even a dog's name.
Prosecutors said Watts, his brother David Watts and law firm employee Wynter Lee saw on plenty of occasions that the list was full of problems, but pressed on toward the prospect of a big legal payday. The claimants were supposed to be paid from a $2.3 billion fund BP set aside to compensate fishermen.
Watts and others denied that they intended to commit fraud, a requirement for a conviction, saying they were relying on the legal process to shake out which plaintiffs had real claims and which didn't. Michael McCrum, who represented David Watts, said he believed jurors saw the government's case "just didn't make sense at its core."
Watts has been a prominent plaintiff's lawyer representing thousands of clients in other cases and raising millions of dollars for President Barack Obama and other Democrats.
Representing himself as he had throughout the trial, Watts on Wednesday had asked jurors in closing arguments to help repair his reputation by fully exonerating him.
"I think it helps a lot," Watts said.
U.S. Attorney Gregory Davis said in a statement that prosecutors respected the verdict, and declined further comment. Lawyers for Le and Warren couldn't immediately be reached for comment.
BP had initially sued Watts in 2013 after complaining about his client list, and the Secret Service and other federal agencies launched a multiyear investigation. Watts said he thought the Secret Service's investigation has been "reckless" and said the government was "bewitched" by BP's allegations, repeating many of them in its own indictment.
Watts said that after a week off, he expected to return to his law firm.
"I've spent the last nine months defending myself as oppose to the clients I've agreed to represent," he said.
Jurors also acquitted Eloy Guerra of Weslaco, Texas, a man whom prosecutors had said was the key link between Watts and Warren.
"It is not often that the federal government swings and misses," said Guerra's lawyer, Chip Lewis.
Thi Hoang "Abbie" Nguyen of Grand Bay, Alabama, also was acquitted. She worked part-time for her sister-in-law, Le, but denied she took part in any conspiracy.
Her lawyer, Ramiro "Remy" Orozco, said all the money that Watts spent preparing his defense helped other lawyers, but also noted the case is a "warning" to plaintiff's lawyers.
"Even though it's a victory ... I think the cost of Mr. Watts' defense is something that he'll never recover," Orozco said.
Copyright 2016 The Associated Press. All rights reserved. This material may not be published, broadcast, rewritten or redistributed.