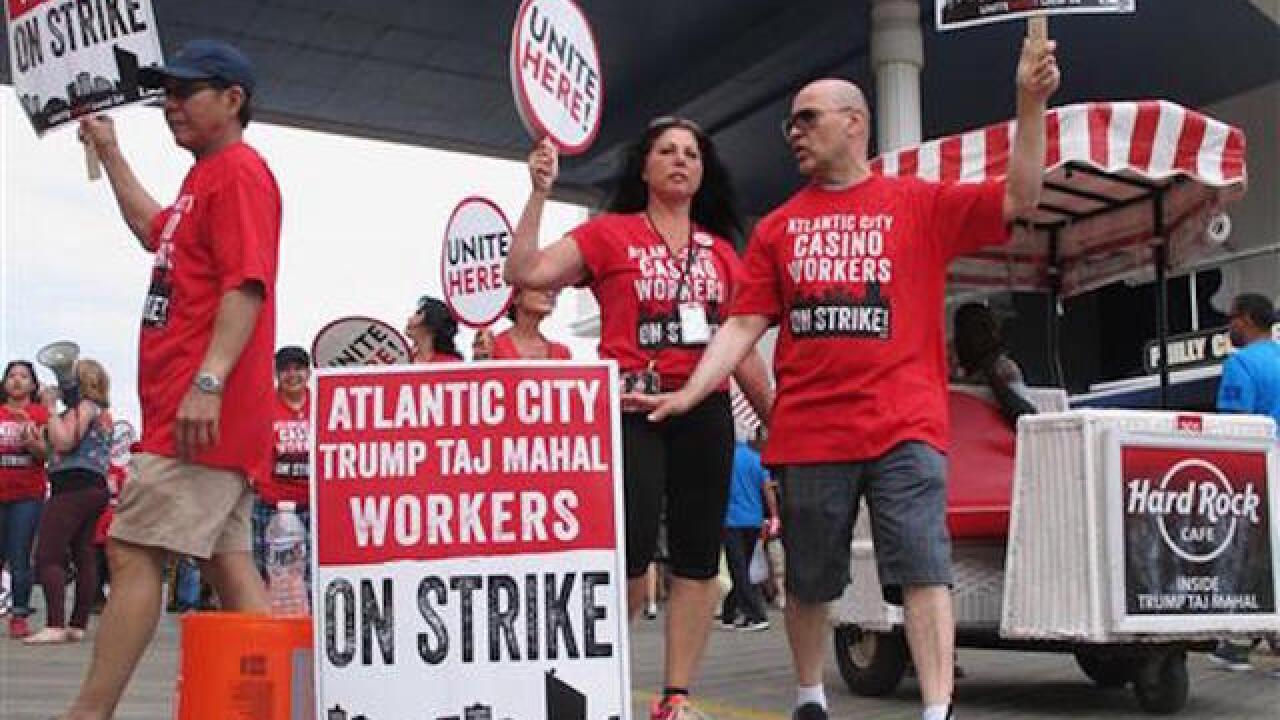 The stakes were raised by Local 54 of the Unite-HERE union against the Taj Mahal, which was opened in 1990 by Donald Trump but now belongs to his friend, fellow billionaire Carl Icahn.

A steady stream of people filed in to the casino lobby off the Boardwalk, braving amplified taunts from picketers and a warning to visitors that "dead mice have been found in this building." The sprawling casino floor was busy, although it had about half the crowd that was playing at Resorts, a casino next door that is half the size of the Taj Mahal — but not facing a strike.

"Hundreds of dead mice were found in the kitchen of this building!" said Benjamin Albert, an organizing director with the union. "If you like mice and roaches, stay at the Taj Mahal! If you like casinos that care about their workers, stay anywhere else!"

Questioned by a reporter, Albert said the union relied upon Atlantic City Health Department inspection reports from March through August of 2015 that found 282 instances of mice or rodent feces throughout the casino.

Taj Mahal management did not immediately respond to a request for comment, and the city's health department was closed Sunday.

In early afternoon, about a dozen people stood in line to check in at the hotel desk for reservations they had made weeks or months earlier, before they knew a strike was possible. Gamblers played slot machines throughout the casino floor, and about two thirds of the table games were in use Sunday afternoon.

Outside on the Boardwalk, picketers shouted at those leaving the casino, and especially people who looked like they were heading inside. To one man wearing a blue New York Giants cap, a picketer yelled, "The Giants will never win another Super Bowl if you go inside there!"

To another customer heading for the casino, a picketer yelled "You'll have horrible luck! Every day, for the rest of your life!"

That seemed to steel the resolve of Dean Cafiero, of Philadelphia, to enter the casino.

"Free markets rule, and these people are against free markets," he said. "They're trying to hold people hostage."

Rich Springer of Trenton was staying at the Taj Mahal over the weekend, and acknowledged the strike had cut back on the level of service. But he said he understood why.

"These guys aren't working, so there's no one to clean the rooms," he said. "A lot of the higher-ups are cleaning and carrying luggage."

Asked if he was disappointed at the number of customers crossing picket lines, Ben Begleiter, a union spokesman, said many people on the Boardwalk have voiced support for the strikers, and acknowledged many, if not most, of the hotel guests were honoring reservations they had made well in advance of the strike.

"These are the first days of the strike," he said. "As we move on from here and the word spreads, there will be fewer and fewer customers."

The main issue in the strike is the restoration of health insurance and pension benefits that the casino's previous owners — after Trump but before Icahn— got a bankruptcy court judge to do away with in 2014.

The strikers include workers that serve drinks, cook, transport luggage, clean rooms and more. Casino dealers and security are not part of the strike.

The union said no contract talks are scheduled.

While the casino still bears his name, Trump, the presumptive Republican presidential nominee, has not owned it for years. The bankruptcy filing and the benefit terminations at the Taj Mahal happened five years after Trump relinquished control of the casino and its parent company, Trump Entertainment Resorts to bondholders in a previous bankruptcy.