Stormy Daniels: I was threatened to keep quiet about Trump 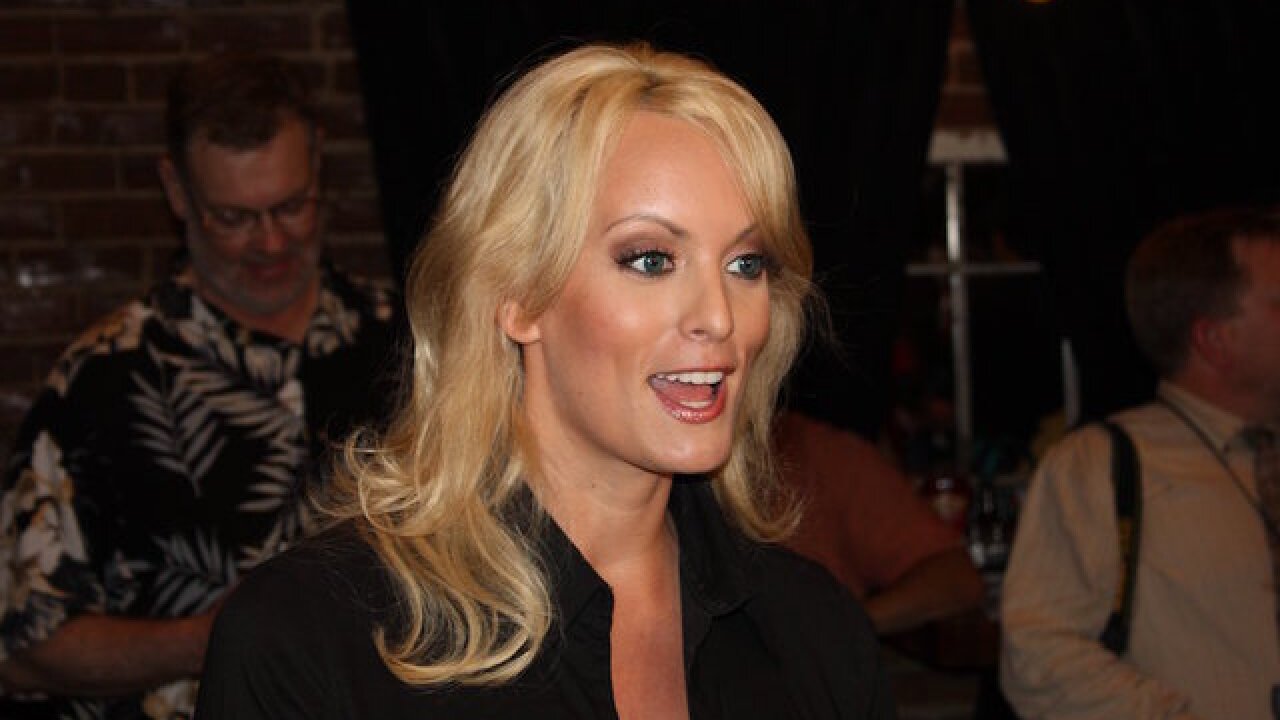 © 2018 Cable News Network, Inc.
Ken Tillis/CNN
<p>Stormy Daniels' legal name is Stephanie Clifford. She's gone to court to break her silence about an alleged affair she had with Donald Trump before he became President. (FILE)</p>

In her first extended television news interview since the news of her alleged 2006 affair with Donald Trump emerged, adult film actress Stormy Daniels declined to discuss whether she had evidence of the affair and said that she was threatened to stay silent about it.

Risking hefty fines for violating a $130,000 hush agreement, Daniels detailed what she said was the only time she and Trump had sex -- saying she spanked Trump with a magazine and that Trump had compared her to his daughter Ivanka.

She also said she was threatened in Las Vegas in 2011 after attempting to sell her story of the alleged affair.

The "60 Minutes" interview with Anderson Cooper is the most detailed televised account Daniels, whose real name is Stephanie Clifford, has so far offered of the affair she says she had with Trump. She also said Trump told her he and wife Melania, who had just given birth to their son, Barron, slept in separate rooms.

Daniels didn't reveal evidence of the alleged affair with Trump, but continued to hint that she isn't yet revealing all she has.

Asked if she has videos, pictures, emails or text messages that corroborate the affair, Daniels said, "I can't answer that right now."

Daniels says she was threatened in 2011

The threat, she said in an interview with CBS's "60 Minutes," came weeks after she'd agreed in May 2011 to sell the story of her affair to a magazine for $15,000. The magazine backed out of the agreement after Trump's lawyer Michael Cohen threatened to sue, two former employees of the magazine told "60 Minutes." Daniels said she never received the money. The White House has denied the affair happened.

Daniels said she was in a parking lot preparing to go into a fitness class, and was pulling her infant daughter's car seat and diaper bag out of her vehicle.

"And a guy walked up on me and said to me, 'Leave Trump alone. Forget the story,'" Daniels said. "And then he leaned around and looked at my daughter and said, 'That's a beautiful little girl. It'd be a shame if something happened to her mom.' And then he was gone."

Asked if she took it as a direct threat, Daniels said: "Absolutely."

"I was rattled," she said. "I remember going into the workout class. And my hands are shaking so much, I was afraid I was going to drop her."

Daniels didn't offer evidence that the approach she detailed had taken place. She said she never saw the man again.

"If I did, I would know it right away," she said. "100%. Even now, all these years later. If he walked in this door right now, I would instantly know."

In a letter obtained by CNN, the law firm representing Cohen alleged their client had been defamed during Daniels' interview.

In the letter, dated Sunday, Cohen attorney Brent Blakely told Daniels' attorney Michael Avenatti that his client had nothing to do with the alleged threat in the parking lot.

Blakely demanded that Daniels cease and desist from making further "false and defamatory" statements about Cohen, and asked for a retraction and apology for the comments she made on Sunday's "60 Minutes" interview.

"In truth, Mr. Cohen had absolutely nothing whatsoever to do with any such person or incident, and does not even believe that any such person exists, or that such incident ever occurred. You and your client's false statements about Mr. Cohen accuse him of criminal conduct and constitute, among other claims, libel per se and intentional infliction of emotional distress," Blakely wrote.

Ahead of the interview's airing, the President and first lady have opted to be in different states. Trump returned to Washington from Palm Beach on Sunday, while Melania Trump will remain in Florida on a pre-scheduled spring break, her communications director said.

Trump had dinner Saturday night at Mar-a-Lago with Cohen, a person who was at the club at the time told CNN.

Returning to Washington on Sunday evening, Trump ignored reporters' shouted questions about whether he would watch the interview and whether Daniels is a liar.

While it's still uncertain if he watched Daniels' interview on "60 Minutes," it is clear that Trump has been irked by the blanket of Stormy Daniels coverage that has dominated cable news in recent days.

In the last few days, Trump has complained to those around him about what he perceives as wall-to-wall coverage of Daniels, according to a source familiar with his reaction, an indication that he is keeping close tabs on how her affair allegation is playing out in the press.

The Daniels interview came despite a $130,000 hush agreement struck days before the 2016 presidential election between Daniels and Cohen. Daniels said she was violating her non-disclosure agreement and risking a $1 million fine "because it was very important to me to be able to defend myself."

Daniels detailed what she said was the one time she had sex with Trump: In his hotel suite during a celebrity golf tournament in Lake Tahoe in July 2006.

She said she mocked Trump after he showed her a magazine with his face on the cover.

"And I was like, 'Someone should take that magazine and spank you with it,'" she said.

"I don't think anyone's ever spoken to him like that, especially, you know, a young woman who looked like me," Daniels said. "And I said, you know, 'Give me that,' and I just remember him going, 'You wouldn't.' 'Hand it over.' And-- so he did, and I was like, 'turn around, drop 'em.'"

"So he turned around and pulled his pants down a little -- you know, had underwear on and stuff -- and I just gave him a couple swats," she said, adding that from that moment on Trump "was a completely different person."

Daniels said Trump then began asking her questions about herself -- and at one point compared Daniels to his daughter, Ivanka Trump.

Daniels said Trump asked her if she'd consider being a contestant on "Celebrity Apprentice" -- which, she said, she took as both serious and something Trump was dangling to get her into bed.

Trump's wife Melania Trump had at the time recently given birth to their son Barron. Daniels said she raised Trump's marriage and was brushed off.

"I asked. And he brushed it aside, said, 'Oh yeah, yeah, you know, don't worry about that. We don't even -- we have separate rooms and stuff,'" she said.

Later that night, Daniels said, she and Trump had unprotected sex, even though she was not attracted to him.

Late Sunday night, Stephanie Grisham, the spokeswoman for Melania Trump, tweeted, "While I know the media is enjoying speculation & salacious gossip, Id like to remind people there's a minor child who's name should be kept out of news stories when at all possible."

In the interview, Daniels said Trump continued to call her about appearing on "Celebrity Apprentice." The two met privately again, but did not have sex. Later, she said, Trump called and said the show appearance wouldn't work out.

Of her relationship with Trump and the prospect of appearing on "Celebrity Apprentice," she said: "I thought of it as a business deal."

Daniels said when news of her alleged affair with Trump broke last year, she was pushed at the time by her attorney and business manager to deny that it had taken place -- which she did in a signed statement released through Trump's attorney, Cohen.

"They made it sound like I had no choice," Daniels said. She acknowledged that she faced no threat of physical violence, but said she thought she could face legal repercussions.

"As a matter of fact, the exact sentence used was, 'They can make your life hell in many different ways,'" Daniels said.