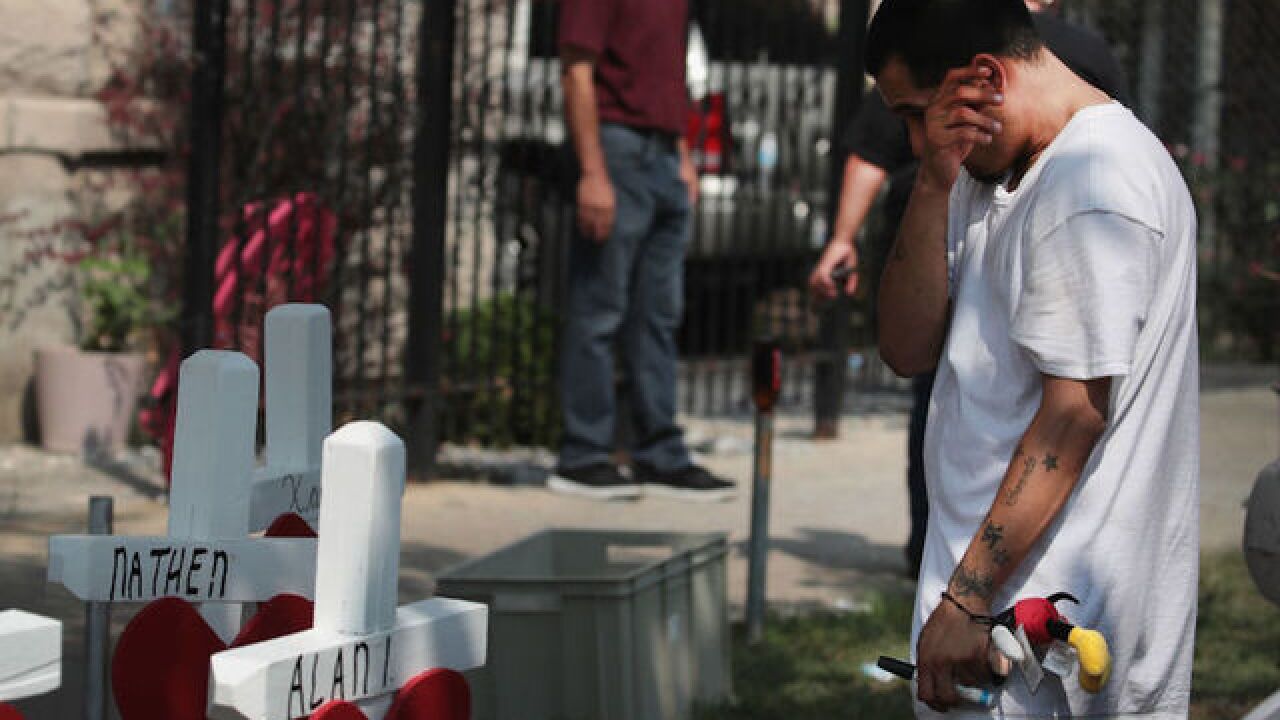 Image copyright 2018 Getty Images. All rights reserved. This material may not be published, broadcast, rewritten, or redistributed.
Scott Olson
<p>Jessie Cobos looks at wooden crosses which make up s a memorial outside a home in the Little Village neighborhood where eight people perished in an early-morning fire on August 26, 2018 in Chicago, Illinois. Cobos lost his three children in the fire.</p>

Eight bodies were discovered Sunday after the blaze broke out in the two-story building. The other two victims, both 14, died this week at John H. Stroger, Jr. Hospital, said Natalia Derevyanny, a spokeswoman with the Cook County Bureau of Administration.

The investigation was opened after fire officials said there were no adults in the home, Illinois Department of Children and Family Services spokesperson Alissandra Calderon said in an email.

A family member told CNN affiliate WGN the children were at the house for a sleepover.

"It was a sleepover and my mom went to go drop off my little sister to her grandmother's and by the time she was over there, I guess, the house just started [to catch] fire," said Marcos Contreras, who lost several siblings in the blaze.

More people might have died if not for the quick actions of a woman who smelled the fire and started knocking on doors and ringing doorbells to wake people up, according to Chicago Fire Commissioner Jose Santiago.

"Kids were just laying about," he said, adding that it didn't appear that the children were trying to escape.

Fire officials said they initially mistook several children for adults because the children were covered in soot when firefighters reached them, making it difficult to determine their ages, Langford said.

Firefighters went by body size, and some children had facial hair and looked older, Langford said.

Langford said the fire claimed members of at least two families. He said it appears at first glance that the children probably died of smoke inhalation.

On Tuesday, Chicago fire officials passed out smoke detectors and fire safety information in the neighborhood.