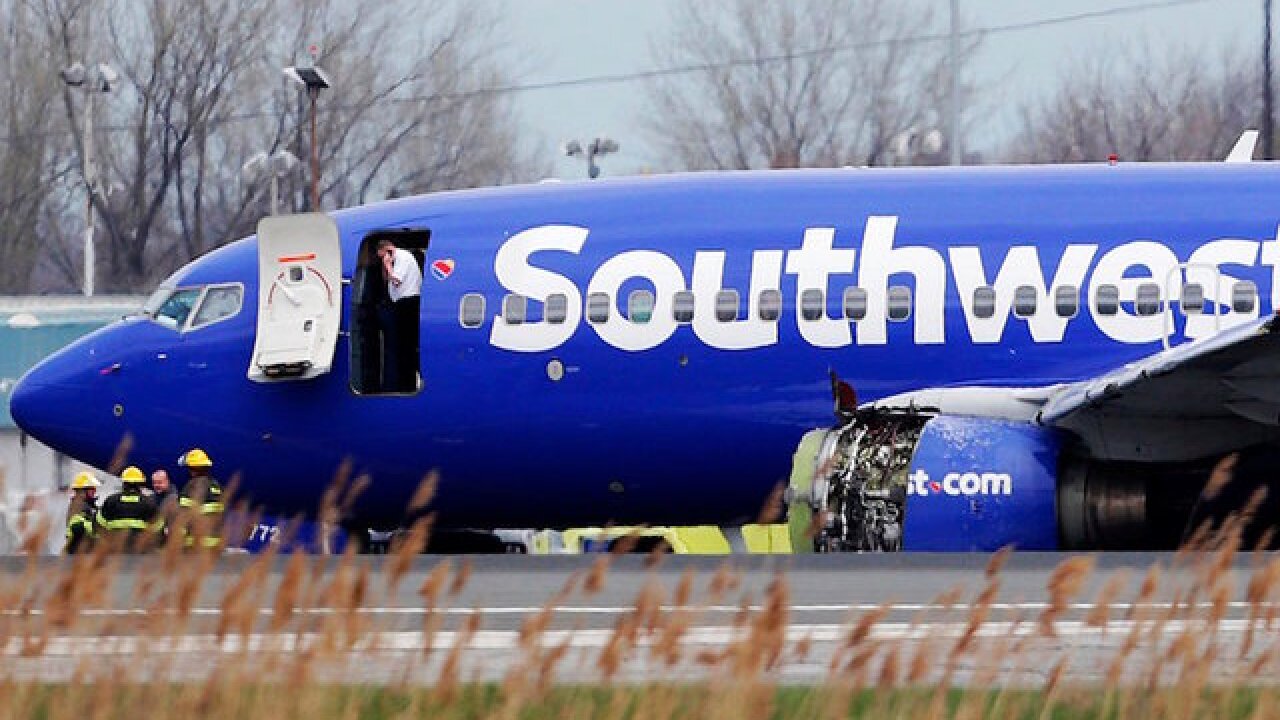 © 2018 Cable News Network, Inc.
AP
<p>A Southwest Airlines plane flying from New York to Dallas had to make an emergency landing Tuesday morning in Philadelphia after one of its engines was damaged, according to the Federal Aviation Administration.</p>

One of 24 fan blades was missing from the engine that failed on a Southwest Airlines flight that made an emergency landing Tuesday after a passenger was almost sucked out a broken window, NTSB Chairman Robert Sumwalt said in Philadelphia.

Sumwalt said a preliminary examination shows there was evidence of metal fatigue where the blade attached to a hub.

Passengers aboard a Dallas-bound Southwest Airlines flight Tuesday struggled to pull a woman back into the plane after she was sucked into a hole left by a shattered window, witnesses said.

The woman was sitting on the left side of the plane when something in the engine apparently broke and smacked into the window. She hung out the hole for many minutes, said Hollie Mackey, who sat next to the victim, and Amy Serafini, who was in the row behind the woman.

A nurse answered a call for help and tried to do CPR.

Southwest CEO Gary Kelly said the family of the victim was the airline's primary concern.

"This is a sad day and our hearts go out to the family and the loved ones of the deceased customer," he said. "We will do all that we can to support them during this very difficult time."

The woman who was killed was identified as Jennifer Riordan, according to CNN affiliate KOAT, which cited Annunciation Catholic School. Riordan, 43, worked for Wells Fargo in Albuquerque, New Mexico, the station reported.

Terror in the cabin

"Everybody was going crazy, and yelling and screaming," passenger Marty Martinez said of the flight, which left New York and was forced to make an emergency landing in Philadelphia.

"As the plane is going down, I am literally purchasing internet just so I can get some kind of communication to the outside world," he said.

Tranchin told WPVI the crew was frantically trying to plug a hole left when a window shattered.

"Flight attendants rushed up. There was momentary chaos. Everyone kind of descended on where this hole was," he said.

The plane had suffered damage to one of its engines, and according to passenger Kristopher Johnson, who was sitting near the front of Flight 1380, debris from the engine flew into the window, breaking it and injuring a woman sitting nearby.

"Shrapnel hit the window causing a serious injury. No other details about that. Several medical personnel on the flight tended to the injured passenger," Johnson said.

The crew reported damage to one of the aircraft's engines as well as the fuselage and a window, the Federal Aviation Administration said in a statement.

The injured woman's arms and body were sucked toward the opening in the plane, Martinez recalled in a phone interview. Objects flew out the hole where the window had been, and "passengers right next to her were holding onto her. And meanwhile, there was blood all over this man's hands. He was tending to her," said Martinez, who was sitting a row or two away from the woman.

Other passengers began trying to plug the hole with jackets and other objects but to no avail. Those items, too, were sucked out of the plane, he said.

Martinez said he didn't think he would survive. Nor did his colleague in an adjacent seat who was scrambling to write one last message to his wife and unborn son, he said.

"We could feel the air from the outside coming in, and then we had smoke kind of coming in the window. Meanwhile, you have passengers that were in that aisle, trying to attend to the woman that was bleeding from the window explosion," he said. "That was just chaos all around."

The plane descended precipitously, Johnson said, but the pilot regained control and informed passengers the flight was headed to Philadelphia.

The flight tracking website FlightRadar24 estimated the Boeing 737-700 descended from 31,684 feet to about 10,000 feet in a little over five minutes.

Kelly told reporters Tuesday evening the engine was inspected April 15, but he had no details on what parts were examined.

The engine had 40,000 cycles on it, a quarter of those since it was overhauled, he said.

It was a rough landing, Martinez said, and things were still so chaotic that he wasn't sure if the plane was going to crash. The jet could have been landing on a freeway for all he knew, he said.

"I didn't know if we were going to be running into a building. I didn't know what state the plane or even the pilot was in, if we were in condition to land," he said. "It was just all incredibly traumatic, and finally when we ... came to a halt, of course, the entire crowd was (in) tears and people crying and we were just thankful to be alive."

Philadelphia Fire Commissioner Adam Thiel said earlier that one of the 149 passengers and crew members on board was taken to the hospital in critical condition. Seven others were treated for minor injuries.

"We are in the process of gathering more information," Southwest said.

Video from the scene showed the plane on the tarmac surrounded by emergency vehicles. The engine on the left wing was badly damaged.

The National Transportation Safety Board sent a team to Philadelphia to investigate the incident. Boeing said it is providing technical assistance in the investigation.

NTSB Chairman Robert Sumwalt said the plane carrying his team will return to Washington with the airliner's flight data recorder and the cockpit voice recorder. The agency expects to have preliminary readouts by Tuesday night.

Sumwalt said part of the inquiry will look at the CFM International 56 turbofan engine. Last year the FAA issued an airworthiness directive on the CFM56-7B version that would have required inspection of the fan blades.

"There are various iterations of that (engine) and so I can't say exactly what that air worthiness directive might have applied to at this point, but that will be part of our investigation," he said.

In August 2016, a Southwest Airlines 737 flying from New Orleans to Orlando was forced to make an emergency landing in Pensacola, Florida, when an engine failed.