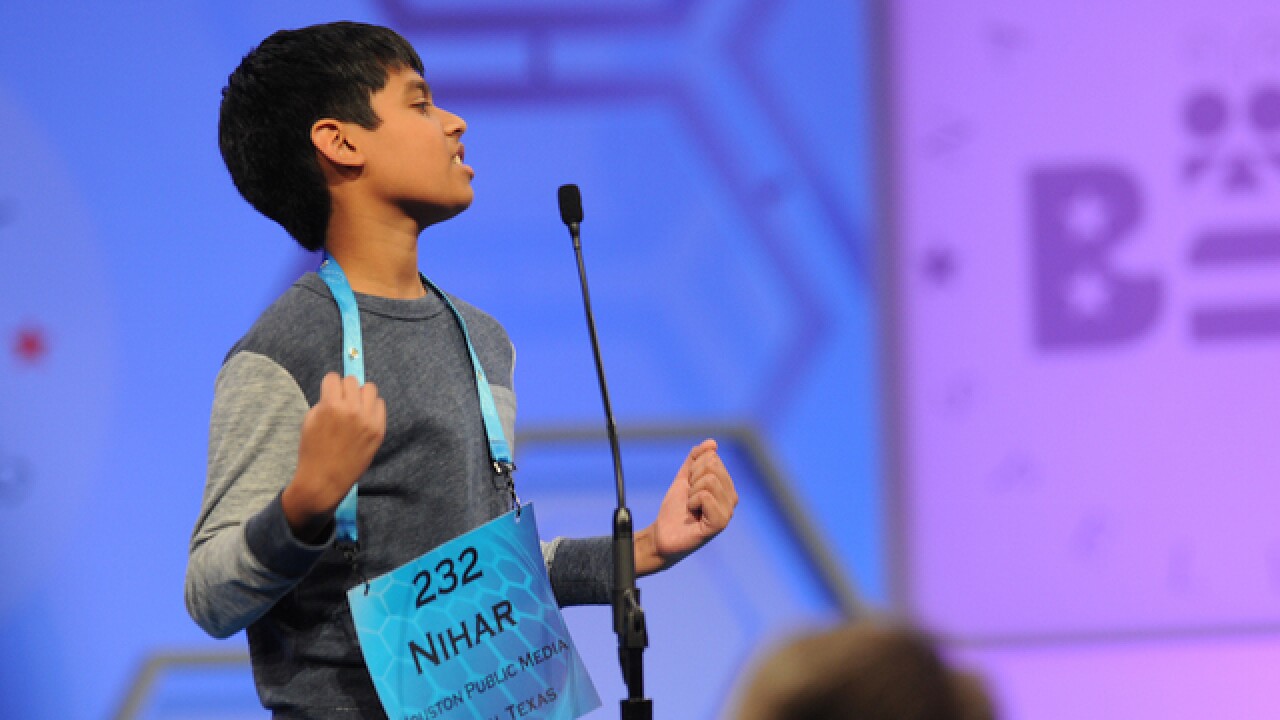 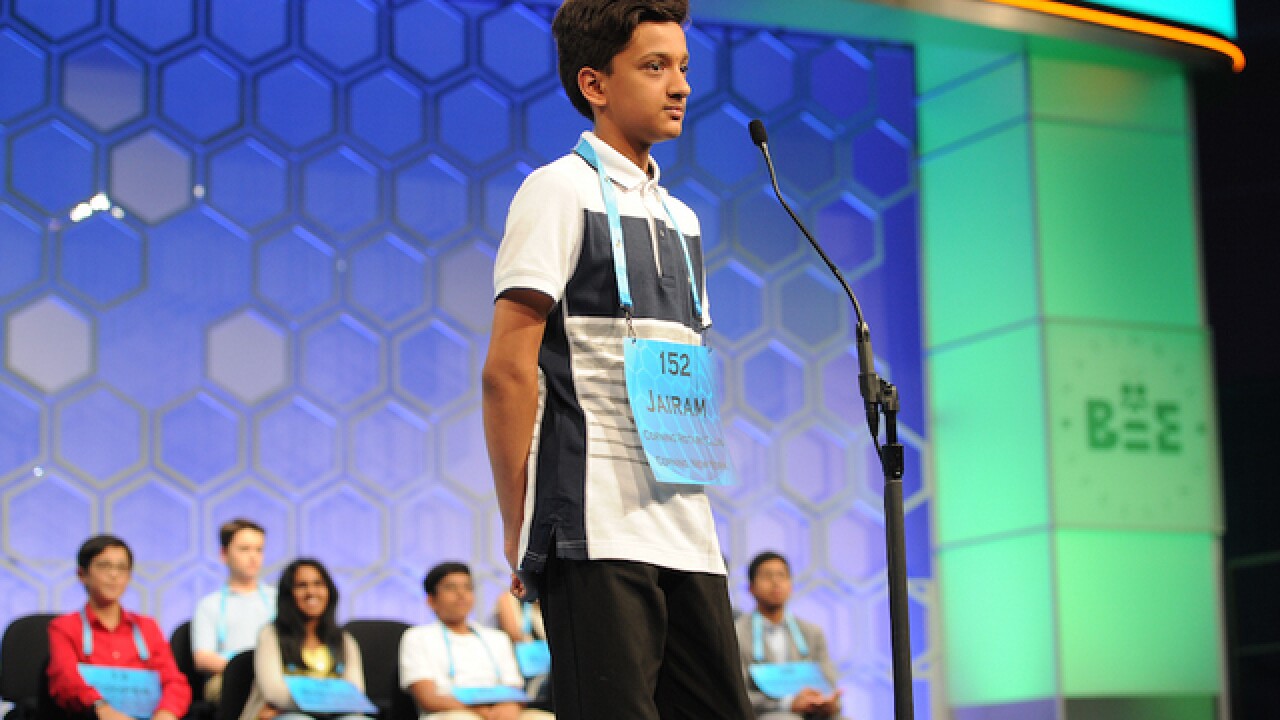 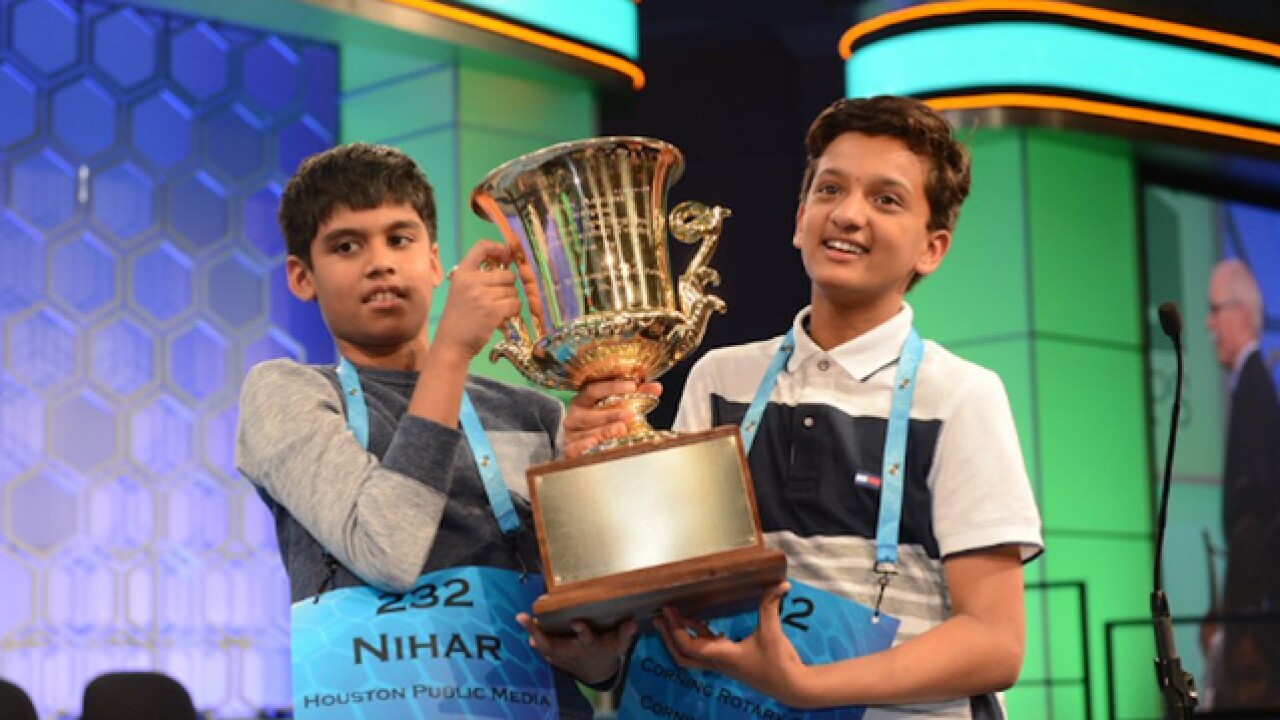 Coincidentally, Jairam's brother Sriram was co-champs along with Ansun Sujoe in 2014.

"My brother told me before I went up that if I got a word I didn't know to try to figure it out and don't give up," Jairam said.

Nihar and Jairam became friends last year, and were on stage rooting for each other. Both spellers said they were glad to share the experience of being champions together.

"I know (Jairam) and he is one of my best spelling friends so I was really happy for him," Nihar said. "I wanted to win but at the same time I felt bad for Jairam. I wanted Jairam to win."

"We've both emailed each other and keep in touch and we've gotten to become close friends," Jairam said.

Nihar is the first first-time winner since 2000, and youngest winner in 14 years to win the Bee. Nihar had two opportunities to win the title outright, but missed both times.

"I didn't think I could do it because there are a lot of really good spellers," Nihar said. "I thought they would win."

Jairam misspelled the word "drahthaar" in the 26th round. Most everyone believed the contest was over.

"I thought it was over," Jairam said afterwards. "I was sad because I didn't want it to end. I made it this far, I didn't want to get out. When he missed the word, I was still nervous because he is a really good speller."

After Nihar misspelled "ayacahuite," Jairam and Nihar went back to work.

In the 37th round of spelling, both spellers misspelled their word,.

Once the championship rounds started, commerical breaks ended and the spellers alternated spots at the microphone for nearly an hour.

"It was an old-fashioned spelling bee," 1980 champion and current pronouncer Jacques Bailly said.

Nihar wowed the crowd by knowing the detention to many words given to him. Nihar also was the only speller out of 284 to get every single answer correct on his written exam on Tuesday.

"I felt nervous the entire time, but I focused on the words," Nihar said. "I did not (hear the crowd), I just stayed focus on Dr. Bailly words and what he said."

The Bee has produced co-champs three straight years. After back-to-back years of co-champs, the Bee changed the rules to make it more difficult to produce co-champs. Those efforts were in vain.

It took eight rounds to whittle the group of 10 down to three, to begin the championship rounds. Snehaa Ganesh Kumar, Jairam and Nihar were the three remaining spellers.

Snehaa bowed out on the first word of the championship round, misspelling “usucapion.”

The night got underway with drama as Los Angeles’ Cooper Komatsu beat the buzzer by correctly spelling “myoclonus.” He was the second speller eliminated in primetime Thursday.

According to Bee officials, 11 million people participated in the Bee at local and qualifying levels. From there, 284 children ranging from first to eight grade were invited to Washington to participate in the Scripps National Spelling Bee.

On Tuesday, a preliminary exam was administered to all Bee participants. On Wednesday, all 284 spellers took the main stage at the Gaylord National Resort Maryland Ballroom to spell. Following two rounds of spelling, 171 spellers successfully spelled both words.

After results from the preliminary exam were announced, the field whittled to 45 spellers.

Earlier on Thursday, four rounds of spelling eliminated 35 of the 45 remaining spellers.