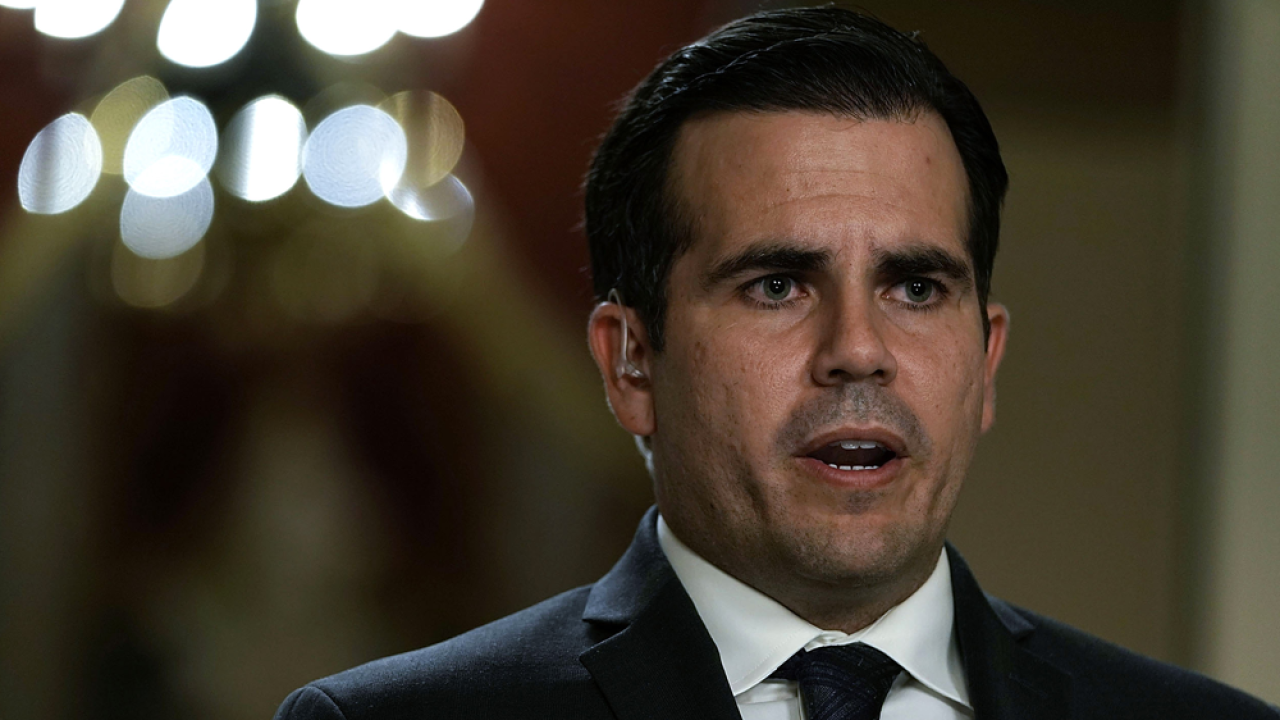 The embattled governor of Puerto Rico Ricardo Rossello has announced that he will not seek reelection in November 2020.

The announcement comes after a week of protest precipitated by the release of explosive text messages between the governor and his top aides and advisers.

Large protests are expected for Monday with protesters planning to gather on a major highway leading to San Juan.

The governor has faced mounting pressure to resign since private online chat messages on the Telegram app were leaked earlier this month in which he and his top aides allegedly made homophobic, misogynistic and sexist comments against opponents and critics, and mocked victims of Hurricane Maria.

Tens of thousands of protesters are expected to descend Monday on a major highway leading to San Juan. On Wednesday, police fired pepper spray to disperse a demonstrationnear the governor's mansion in San Juan.

Celebrities with Puerto Rican roots such as singer Ricky Martin, "Hamilton" playwright Lin-Manuel Miranda and the Puerto Rican rapper Benito Martinez, known by his stage name Bad Bunny, have participated in the protests in Puerto Rico and New York.

Rossello, 40, the second youngest governor in Puerto Rican history and the son of former Gov. Pedro Rossello, was sworn in as governor of the U.S. territory on Jan. 2, 2017, amid turmoil over a debt crisis and 13 straight years of recession.

Rossello, a Democrat who was swept into office on a pro-statehood platform, began to see his support erode in the aftermath of Hurricane Maria as his administration was accused of mismanagement in handling recovery efforts from the devastating storm.

In a 32-count indictment, Keleher and Marrero were accused of fraud involving $15.5 million in federal funds issued between 2017 and 2019.

On the heels of the indictment came the explosive publication on July 13 by the Puerto Rico Center for Investigative Journalism, which included nearly 900 pages of conversations between Rossello and his top male aides, advisers and at least one lobbyist using vulgar language to disparage political opponents, critics and even members of their own party while communicating via a Telegram app chat group.

Among the messages leaked was one by Rossello referring to former New York City Council Speaker Melissa Mark-Viverito as a "whore" after she slammed Democratic National Committee chair Tom Perez for supporting statehood for Puerto Rico.

"A person who uses that language against a woman, whether a public figure or not, should not govern Puerto Rico," Mark-Viverito responded in a statement in Spanish that she posted on Twitter.

Rossello was also caught making fun of an overweight man whom he posed with for a photo.

The leaked chat room conversations also captured Christian Sobrino, a top economic adviser to Rossello, making homophobic remarks about Ricky Martin and saying San Juan Mayor Carmen Yulin Cruz was "off her meds" and that he was “salivating to shoot” her. Cruz is expected to run against Rossello in the 2020 gubernatorial election.

Rossello also used profanities when discussing the Financial Oversight and Management Board for Puerto Rico, created in 2016 by U.S. federal law to oversee Puerto Rico's debt restructuring. Other members of the chat group used emojis with the middle finger to express their disdain for the oversight board.

Members of the group also joked about the corpses that piled up after Hurricane Maria.

Sobrino and Rossello's secretary of state, Luis Rivera Marin, resigned once the chat messages were leaked.

"I'm not proud of what I did," Rossello said in a statement last week. "Those were merely comments, but they were hurtful comments. And I apologize for what I've done. But, I need to move forward, continue on with the work I'm doing for Puerto Rico. I will continue in my job."

Rossello added, "I have not committed any illegal acts or corrupt acts. I committed an improper act."

President Donald Trump has issued several tweets about the upheaval in Puerto Rico, saying in one that "a lot of bad things are happening there."

But Trump has aimed his remarks more at Cruz than at Rossello. Cruz has strongly criticized the Trump administration's response to Hurricane Maria.

The President tweeted that Cruz is "a despicable and incompetent person who I wouldn't trust under any circumstance."

Cruz responded in a statement on Facebook Thursday, saying, “President Trump you never got it; and you never will."

"This is not about you; this is about the dignity of the Puerto Rican people," Cruz said in her statement. "What is happening in Puerto Rico is that a people united by a profound sense of dignity are on the streets protesting corruption and a misogynist, homophobic, two-faced governor."