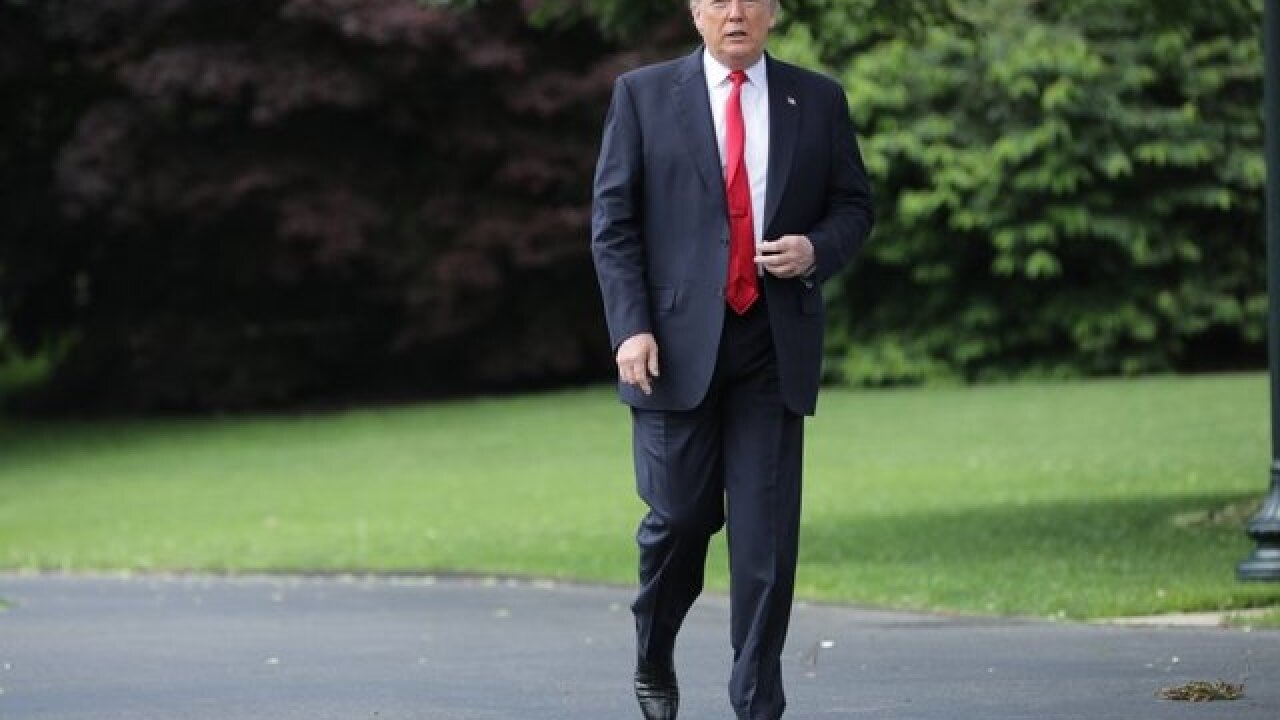 The President said lines of communication had opened between the two countries after officials said Thursday that the North Koreans had become unresponsive, leading to the planned summit's cancellation.

"We're going to see what happens. We're talking to them now. It was a very nice statement they put out," Trump said on the South Lawn before departing in his helicopter for the US Naval Academy in Maryland, where he is delivering a commencement address.

Asked whether the North Koreans were playing games, Trump acknowledged they were -- and suggested he was too.

"Everybody plays games. You know that," he told reporters when asked about the ongoing talks. "You know that better than anybody."

Earlier Friday morning, Trump also hailed North Korea's statement that its leader, Kim Jong Un, is still willing to meet Trump "at any time" despite the President's cancellation of an historic summit between the two leaders.

"Very good news to receive the warm and productive statement from North Korea," Trump wrote Friday morning on Twitter. "We will soon see where it will lead, hopefully to long and enduring prosperity and peace. Only time (and talent) will tell!"

Kim Kye Gwan, a top official at North Korea's Foreign Ministry, said Trump's decision to cancel the talks, which were scheduled for June 12 in Singapore, ran counter to the global community's wishes for peace on the Korean Peninsula.

"We would like to make known to the US side once again that we have the intent to sit with the US side to solve problem(s) regardless of ways at any time," said Kim in comments published Friday by the country's state-run news agency KCNA. Kim also said Trump's decision was "not consistent with the desire of humankind for peace and stability in the world, to say nothing of those in the Korean Peninsula."

Minutes before his Friday morning tweet, Trump claimed Democrats were "rooting" against his administration in its negotiations with North Korea.

"Democrats are so obviously rooting against us in our negotiations with North Korea," the President wrote on Twitter. "Just like they are coming to the defense of MS 13 thugs, saying that they are individuals & must be nurtured, or asking to end your big Tax Cuts & raise your taxes instead. Dems have lost touch!"

Trump announced his decision to scrap the June summit in a letter Thursday that read "I feel it is inappropriate, at this time, to have this long-planned meeting" following antagonistic rhetoric from Pyongyang.

After the news the summit was called off, Democrats criticized Trump for the decision.

"It's clear he didn't know what he was getting into," the California Democrat said. "And now he's walking away from it in this very chummy, palsy-walsy letter to Kim Jong-un. He, Kim Jong-un, is the big winner."

She added, "And when (Kim) got this letter from the President saying, 'Okay, nevermind,' he must be having a giggle fit right there now in North Korea."

"I think everyone understands that the only way to resolve this is through diplomacy," Cardin said. "There is no military option without extreme risks, so it's puzzling that the President has now thrown diplomacy off track."

Cardin, who sits on the Senate Foreign Relations Committee, knocked accusations that Democrats want Trump to fail, saying "we certainly want the President to succeed."

"We want to make sure that when a summit takes place, and we hope it will, that it will be properly prepared and we can have a favorable outcome," Cardin said.

Republicans, however, hailed the President's action as a tough negotiating move.

During an interview on "Fox and Friends" on Friday, Scaramucci said the "bluntness and steely backbone" that the President has displayed in deal-making is "something that these guys don't like, which I find very ironic."

"It's almost like they are supporting -- they support MS 13, Hamas and now they're supporting the Chairman, Chairman Kim," he said.

Republican Sen. Lindsey Graham said in an interview on the same program Friday morning, "Everybody who is criticizing the President regarding the letter, how well did you do in North Korea?'" He added that he thought the letter was the "right decision."

Graham said he believes Trump will be able to achieve the denuclearization of North Korea within his first term.

"It's not 'if' he ends the North Korean program, it's 'how and when,'" Graham said. "There's two ways: Diplomacy to be a win, win, which is the preferred route; military conflict that will destroy the regime. When: I think he is going to do this in his first term."

According to Graham, Trump said he's "not going to pass this on to anybody else."

A former critic of Trump during the campaign, Graham added, "He thinks he is going to get reelected. So do I."

The South Carolina Republican also told Fox News that the next step for Trump is to reprimand China for seemingly undercutting US diplomatic efforts with North Korea after a meeting Kim had in early May with Chinese President Xi Jinping.

"He's going to go back to China, I think, read them the riot act. 'If you want a peaceful solution to the North Korean problem, help me. If you keep playing this game we have played for 30 years, there is going to be a war in your backyard, not ours, and North Korea is going to lose,'" Graham said.

Graham said he hopes "through diplomacy there would be no nuclear North Korea."

But, "if there is going to be a war, it's going to end badly for North Korea," he said.