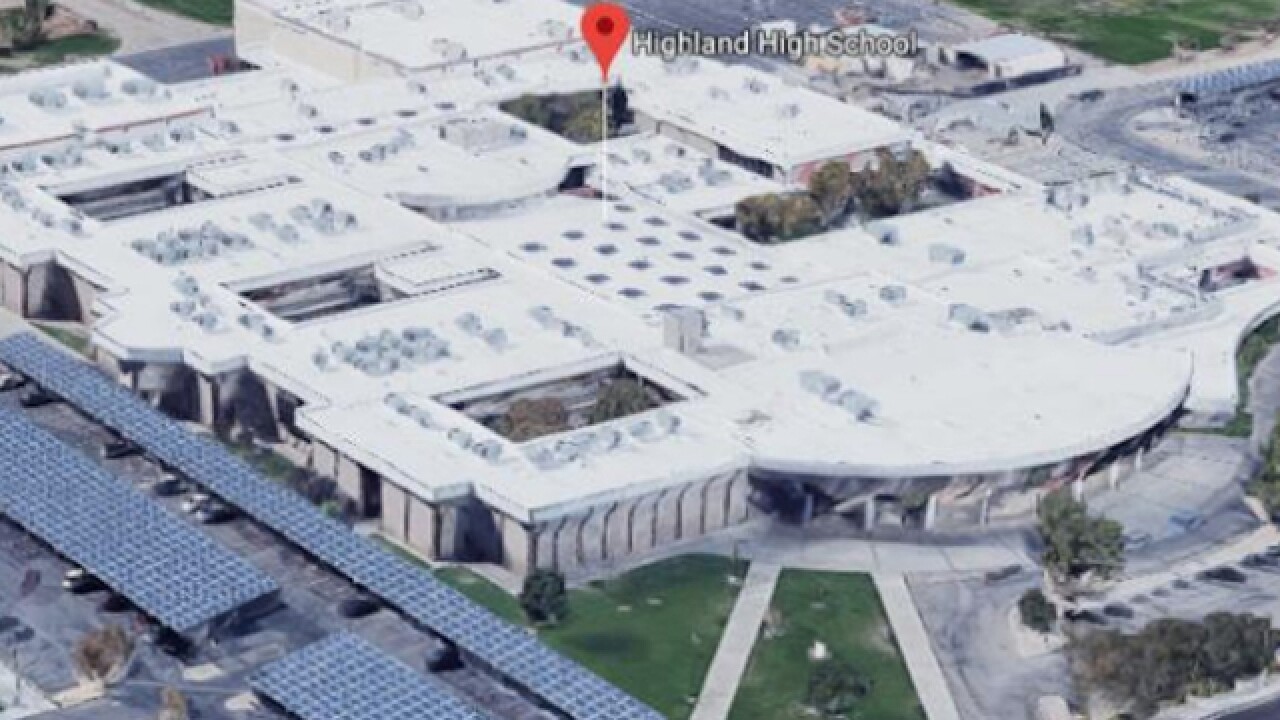 A 14-year-old boy is in custody on suspicion of shooting a teen in the arm at a Southern California high school Friday morning, the Los Angeles County Sheriff's Department said.

The shooting happened at or near Highland High School in Palmdale around 7 a.m. PT, even as some students still were arriving at school, sheriff's Capt. Darren Harris said.

The names of neither the suspect nor the wounded teen, also 14, were immediately released. The injured teen brought himself to a hospital and is expected to recover fully, Harris said.

It's the 21st school shooting in the United States this year.

Witnesses who were outside the school described hearing a gunshot or gunshots, and seeing students running from the building.

The suspect was apprehended near a Vons grocery store about a mile from the school, a Los Angeles County fire official said. Authorities found a rifle believed to have been used in the shooting "a distance away (from the school) in the desert," Harris said.

Harris said investigators were trying to determine what led up to the shooting.

Even after the arrest, the school still was on lockdown as of 9:30 a.m. PT, and officials were trying to determine when and how to release students, Principal Chris Grado said on Twitter.

A brother of some Highland High students, Ricky Munoz, 23, told CNN he had just dropped his two younger brothers and a friend off at the school just after 7 a.m.

"About a minute later, I get a call from them saying there were gunshots" and they asked to be picked up, Munoz said.

One of the brothers, 16, told Munoz he heard one gunshot, and that students were running.

Nadine Luke told CNN her 18-year-old daughter called her, screaming, after she heard shots in the school. The teen was in her Reserve Officers' Training Corps class, and said students were putting sofas and desks in front of the classroom door and windows to barricade themselves inside, Luke said.

Lydia Gilbert, a junior at Highland, said her mother was dropping her off when a student ran up and warned her there was a shooting.

Lydia said she then heard two gunshots before she and her mom drove away.

"I was supposed to be going to school earlier than I was, but was late," she said. A shooting at the school, she said, has "actually been one of my biggest fears."

Highland High student Katharina Smith, 16, said she was driving to the school when she saw "a ton of police racing toward school."

"There were some kids running from the school, and security and sheriff were telling people to go home," she said.

A student's mother, Ana Salazar, told CNN affiliates KCAL and KCBS that her son texted her to say a shooting had happened.

"I thought he was joking, and I'm like, 'Don't mess around, that's not funny,'" Salazar said. "And he's like, 'No mom, for reals, I locked myself up. I heard it at the other side of the school. There was one shot. And I'm locked up in one of the buildings now.'"

Nearby elementary schools placed on lockdown, too

At least three nearby schools -- David G. Millen Intermediate, Cottonwood Elementary and Ocotillo Elementary -- were on lockdown, employees there said.

The Bureau of Alcohol, Tobacco, Firearms and Explosives said it was responding to a shooting at Highland High School, according to its official Twitter account.

Palmdale, a city of about 150,000 people, is in Los Angeles County, about 40 miles north of downtown Los Angeles.

In March, a teacher accidentally discharged a gun during a public safety class at Seaside High School in Seaside, California, injuring a student.

The deadliest school shooting this year was on February 14, when a former student killed 17 students and staff at Marjory Stoneman Douglas High School in Parkland, Florida.