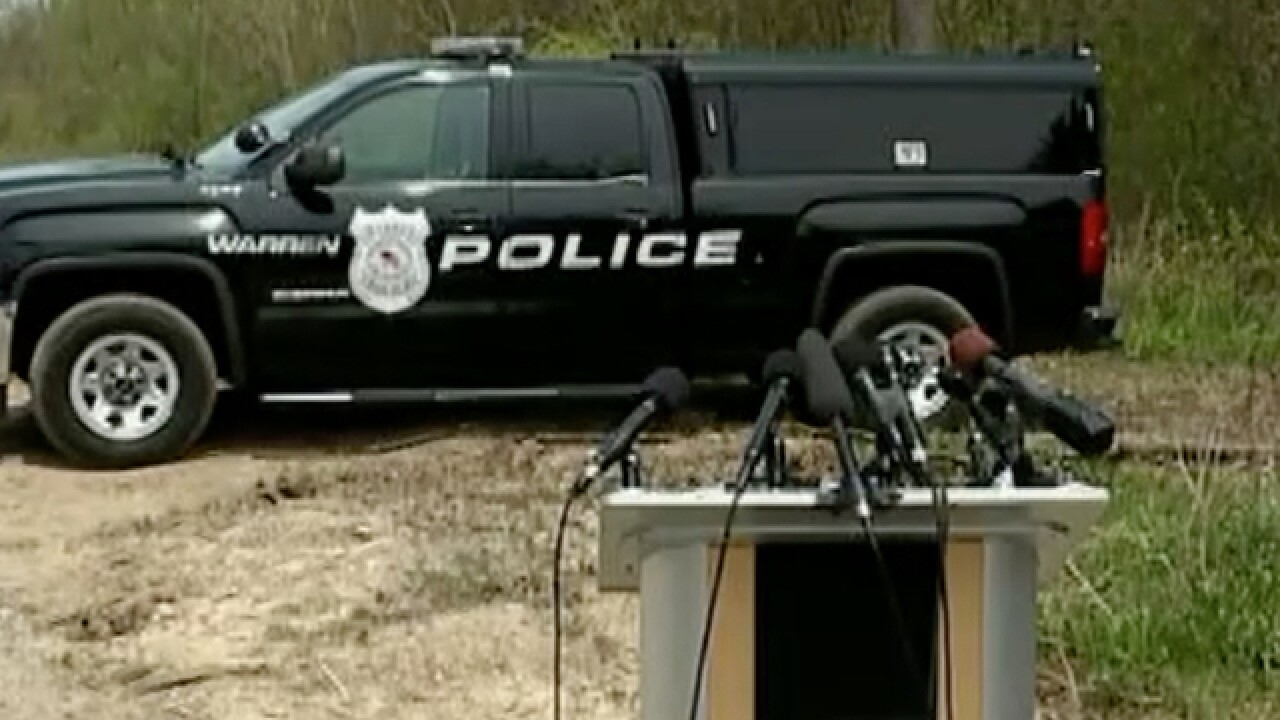 <p>Michigan Police give a news conference near a wooded area where bodies connected to a 40-year-old cold case may have been found.</p>

Police and the FBI began a third day of searching a southeast Michigan field Wednesday in hopes of uncovering clues in the cold cases of as many as a half dozen girls who went missing from the Detroit area in the 1970s and 1980s.

While the activity has been unsettling for nearby residents, more unsettling is the reason authorities homed in on this particular field: It's the same area where a convicted child killer buried 13-year-old Cindy Zarzycki after kidnapping and killing her in 1986, Warren Police Commissioner Bill Dwyer told CNN.

Already, the 25 to 30 investigators participating in the search have discovered things that make them "cautiously optimistic we're on the right track," Dwyer added at an afternoon news conference, declining to elaborate.

Zarzycki's killer and the suspect in the cold cases is Arthur Ream, who turned 69 on Wednesday. He is presently serving a life sentence in Muskegon Heights, in the opposite corner of the state.

"Based on our information, we believe he chose to bury these other teen girls in the same general area," Dwyer said. "I would describe Ream as a serial rapist and killer."

It is not clear if Ream has an attorney, but he faces no charges related to the missing girls. He is, however, the only person of interest or suspect in the case, the commissioner said.

The field sits along the North Branch Clinton River and is tucked among small residential neighborhoods and two golf courses. It's about 3 miles west of Interstate 94. The field is several miles north of Warren, a Detroit suburb, but Warren authorities are working the case with the FBI and the Macomb County Sheriff's Office.

Footage from the scene showed several vehicles parked in a dirt field along a wood line and three tents set up at the edge of the brush. Two backhoes dug up the earth in separate locations, several yards apart.

The search area is about 24 acres, but authorities are working to narrow down potential dig sites, said Matt Krupa, supervisory senior resident agent in the FBI's Macomb County office.

"This is private land and we do not believe the land owner has any involvement," Dwyer told CNN.

It took time to begin search efforts because police needed the weather to warm up and the ground to thaw, he said. Temperatures were dipping below freezing in the area as recently as April 30. The search began Monday while digging actually began Tuesday, after authorities were able to clear some of the brush from the property.

Break in the cases?

News of the search ignited hope among the missing girls' loved ones, but also reopened tender wounds. Kimberly Alice King went missing in 1979, and her sister told CNN affiliate WXYZ that it's been "almost 39 years of agony" for the family.

"As you can imagine, I am both devastated and grateful to be where we are today," Konnie Beyma told the station. "My father is 80 years old. It's time for closure. We need to bring Kimberly home and lay her to rest as she deserves. She's been through enough. She needs to be back with her family."

Dwyer did not provide extensive details on how detectives came to reopen King's case in November, other than to say, "Law enforcement at times will open these cold cases and take a second look."

In the course of that second look, detectives interviewed Ream several times in prison, he said. Investigators also spoke to inmates who claimed Ream had boasted of killing between four and six other people, he said. Ream "flunked a polygraph test," and investigators then obtained a search warrant for the field in Macomb County, the commissioner said.

Investigators were hoping Ream would cooperate more than he has, Dwyer said. Asked if Ream could be enticed to talk, the city's top cop replied, "There's deals that could be made if he wants to talk. The door's open."

Dwyer says he wants to bring closure to the families. Brenda Lee Handloser, who was 9 when her sister, Nadine O'Dell, vanished, told CNN affiliate WDIV that closure is all she wants.

"I want to bring my sister home and lay her to rest. I don't care if it's a bone, a piece of hair, a nail. I don't care. I just want my sister," she said.

Though Dwyer said investigators believe four to six girls may be buried in the Macomb County field, he provided CNN with the names of only four of them. There is no connection between the victims, who Dwyer described as "random targets." They are:

Kimberly was last seen at a friend's house, Kellie at Twelve Oaks Mall and Kim at an ice cream parlor, according to the National Missing and Unidentified Persons System.

Nadine was last seen walking down a road in Inkster, about 20 miles west of Detroit, according to the missing person database. Her boyfriend was supposed to pick her up along the route. He "was on the way to meet her and arrived 20 minutes later and had not crossed paths with her," the database said.

Handloser remembers Nadine's boyfriend returning to the house and asking where she was.

"She wasn't there and that is how it all started," Nadine's sister told WDIV. "I know there is somebody out there that knows. ... I know somebody had to see something. It was during the day."

Ream was charged in the 1970s with taking indecent liberties with a child -- a teen hitchhiker -- and sentenced to five years in prison, according to Michigan Department of Corrections records. He went to prison for the crime in 1974 and got out in 1978, the year before Kimberly King disappeared, Dwyer said.

In 1996, he pleaded guilty to third-degree criminal sexual conduct with a minor between 13 and 15 years old, the records show. A judge handed down a 15-year sentence, which Ream was serving when he was implicated in Cindy Zarzycki's murder.

According to court records from a failed 2010 appeal of his murder conviction, Ream knew Cindy through his son, Scott, who was dating the 13-year-old.

Ream had spoken to Cindy on the phone April 20, 1986, and asked her to meet him at a local Dairy Queen for his son's surprise birthday party, the records said. Not only was Scott's birthday in January, but evidence indicated that Ream had arranged for Scott to be out of town that day.

Cindy's brother followed her to Dairy Queen, her friend saw a white van similar to one owned by Ream, the Dairy Queen was located a short drive from the carpet business where Ream was living at the time and Ream's wife refuted his alibi, according to the records.

"A reasonable jury could find that defendant deliberately lured Cindy to the Dairy Queen through the ruse about his son's birthday and that Cindy was never seen again because defendant killed her," the court records stated.

Ream also "indicated he knew the location of Cindy's body and admitted to having a fetish for 13- and 14-year-old girls," the documents continued.

Following his conviction a decade ago, Ream accompanied police to the field they've been searching this week and pointed to the spot where he had buried Cindy beneath 18 inches of dirt, Dwyer told reporters Wednesday.

Kathie Lucas held a photo of her sister, Kimberly King, as she told WXYZ this week's search is the best chance for justice in decades.

"We're losing years, either for people who witnessed it, or for the person who did it, to whatever -- just anyone who knows anything that might connect it to," she told the station.

Dwyer told reporters he would not hold another news conference until the search team found remains. When that happens, he said, he will hold a news conference within three hours.