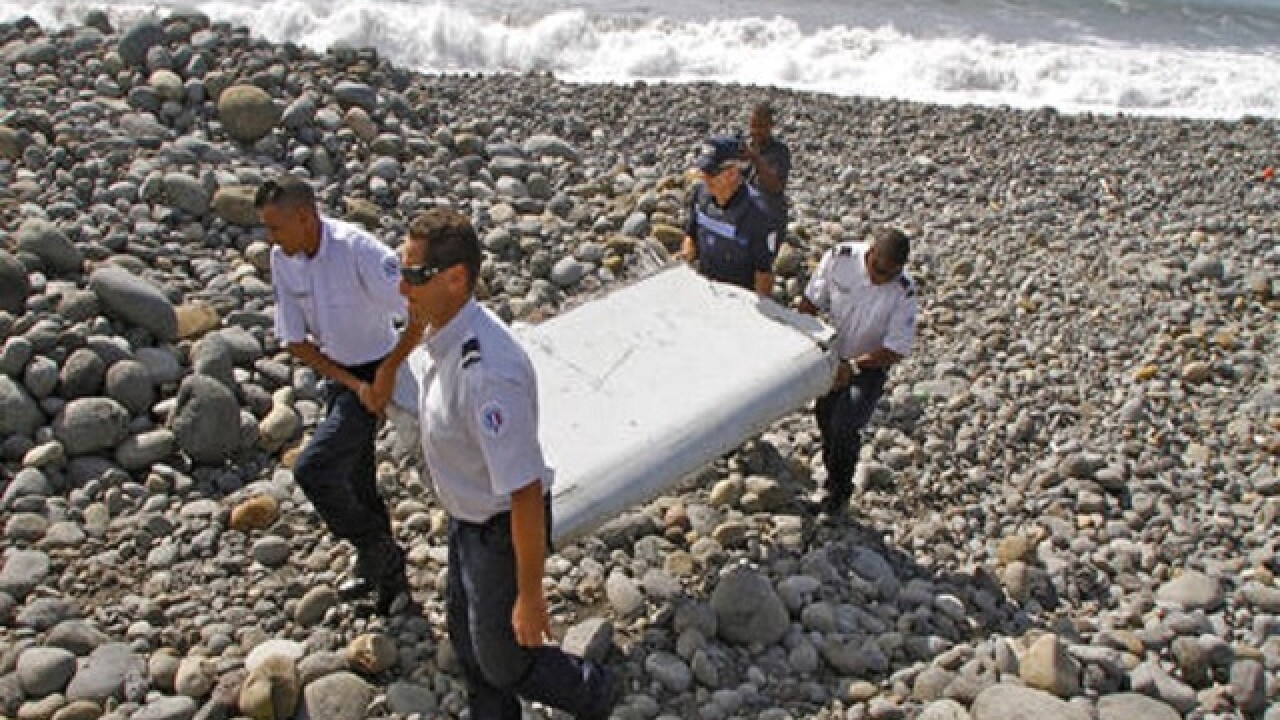 By: Associated Press
Posted at 1:42 AM, Aug 19, 2016
CANBERRA, Australia (AP) — Experts hunting for the missing Malaysian airliner are attempting to define a new search area by studying where in the Indian Ocean the first piece of wreckage recovered from the lost Boeing 777 — a wing flap — most likely drifted from after the disaster that claimed 239 lives, the new leader of the search said.
Officials are planning the next phase of the deep-sea sonar search for Malaysia Airlines Flight 370 in case the current two-year search of 120,000 square kilometers (46,000 square miles) turns up nothing, said Australian Transport Safety Bureau chief commissioner Greg Hood, who took over leadership of the bureau last month.
However, a new search would require a new funding commitment, with Malaysia, Australia and China agreeing in July that the $160 million search will be suspended once the current stretch of ocean southwest of Australia is exhausted unless new evidence emerges that would pinpoint a specific location of the aircraft.
"If it is not in the area which we defined, it's going to be somewhere else in the near vicinity," Hood said in an interview this week.
Further analysis of the wing fragment known as a flaperon found on Reunion Island off the African coast in July last year — 15 months after the plane went missing — will hopefully help narrow a possible next search area outside the current boundary.
Six replicas of the flaperon will be sent to Australia's Commonwealth Scientific and Industrial Research Organization's oceanography department in the island state of Tasmania where scientists will determine whether it is the wind or the currents that affect how they drift, Hood said. This will enable more accurate drift modeling than is currently available.
If more money becomes available, the Australian bureau, which is conducting the search on Malaysia's behalf, plans to fit the flaperons with satellite beacons and set them adrift at different points in the southern Indian Ocean around March 8 next year — the third anniversary of the disaster — and track their movements.
Meanwhile, barnacles found on the flaperon and an adjacent wing flap that washed up on Tanzania in June are being analyzed for clues to the latitudes they might have come from. The flap is in the Australian bureau's headquarters in Canberra where it has been scoured for clues by accident investigators.
Peter Foley, the bureau's director of Flight 370 search operations since the outset, said the enhanced drift modeling would hopefully narrow the next search area to a band of 5 degrees of latitude, or 550 kilometers (340 miles).
"Even the best drift analysis is not going to narrow it down to X-marks-the-spot," Foley said.
Some critics argue that the international working group that defined the current search area — which includes experts from the U.S. National Transportation Safety Board, Britain's Air Accidents Investigation Branch, the plane's manufacturer Boeing, Australia's Defense Science and Technology Group, satellite firm Inmarsat and electronics company Thales — made a crucial mistake by concluding that the most likely scenario was that no one was at the controls when the plane hit the ocean after flying more than five hours.
The airliner veered far off course during a flight from Kuala Lumpur, Malaysia, to Beijing. What happened to the plane has become one of the biggest mysteries in aviation, with a wide range of theories, including that a hijacker could have killed everyone on board early in the flight by depressurizing the plane.
The current search area was defined by analysis of a final satellite signal from the plane that indicated it had run out of fuel. Scientists have determined how far the plane could have travelled from a height of up to 12,200 meters (40,000 feet) after both engines lost power.
But critics who favor the theory that Captain Zaharie Ahmad Shah hijacked the plane argue that he could have glided the plane beyond the current search area. Some say he could have made a controlled ditch at sea in order to minimize debris and make the plane vanish as completely as possible. Officials say Zaharie flew a similar route on his home flight simulator only weeks before the disaster.
Foley said Australian analysis of the flap in Canberra suggested that it had not been deployed when it hit the water. It had been retracted inside the wing. A pilot attempting a soft landing would have extended the wing flaps. The Australians are awaiting the verdict of a Boeing accident investigation team on their findings.
Recent analysis of the final satellite signals also suggest the plane was descending at a rate of between 3,700 meters (12,000 feet) and 6,100 meters (20,000 feet) a minute before it crashed. A rate of 600 meters (2,000 feet) a minute would be typical of a controlled descent.
"The rate of descent combined with the position of the flap — if it's found that it is not deployed — will almost certainly rule out either a controlled ditch or glide," Foley said.
"If it's not in a deployed state, it validates, if you like, where we've been looking," he said.
Crews have not given up hope of finding the plane in the current search area, which because of bad weather and 20-meter (65-foot) swells could take them until December to finish scanning.
Less than 10,000 square kilometers (4,000 square miles) of seabed, which is outside the original 60,000-square-kilometer (23,000-square-mile) high-priority search zone, remain to be searched.
More than 20 sonar contacts require closer examination by a sonar-equipped underwater drone. These are between 2,700 kilometers (1,700 miles) and 1,900 kilometers (1,200 miles) from the Australian port of Fremantle where the search ships are based.
"We are still hopeful and optimistic," said Hood.
Foley said finding the plane was the only chance of the solving the mystery of what happened aboard Flight 370.
"We will never know what happened to that aircraft until we find it," Foley said.
Copyright 2016 The Associated Press. All rights reserved. This material may not be published, broadcast, rewritten or redistributed.