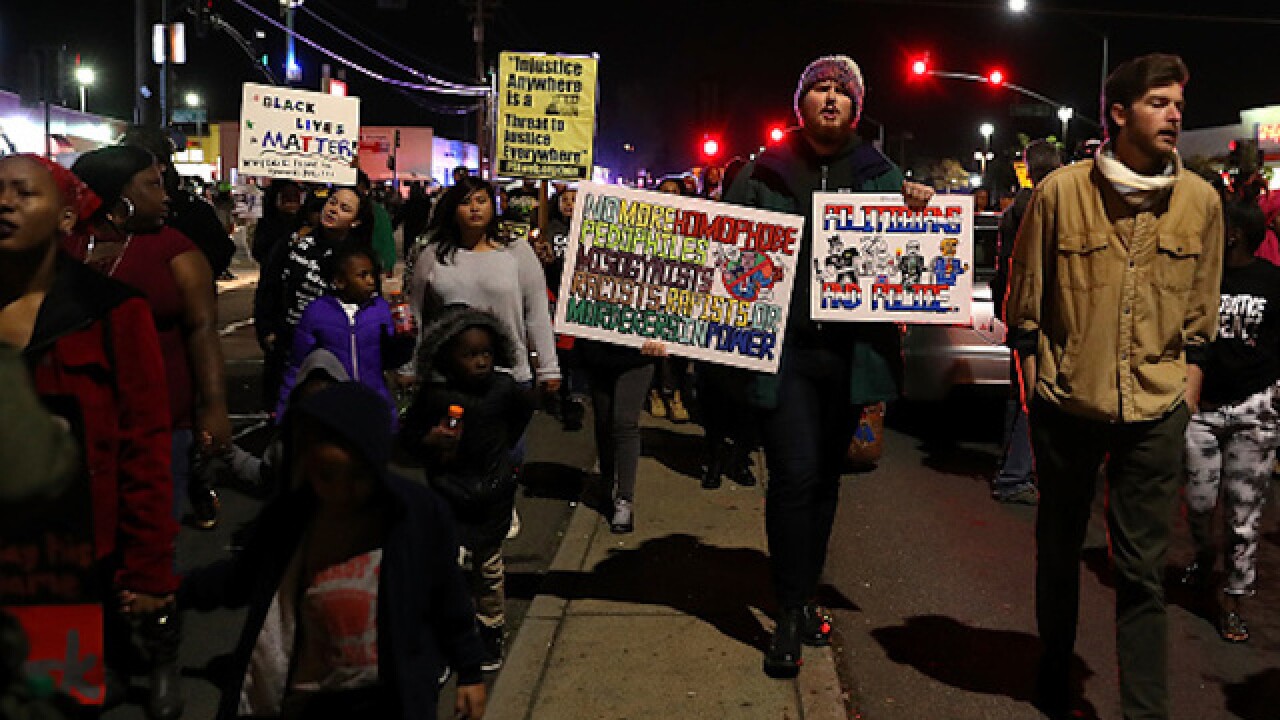 Image copyright 2018 Getty Images. All rights reserved. This material may not be published, broadcast, rewritten, or redistributed.
Justin Sullivan
<p>SACRAMENTO, CA - MARCH 23: Black Lives Matter protesters hold signs as they march during a demonstration on March 23, 2018 in Sacramento, California. For a second day, dozens of protesters marched through Sacramento to demonstraate against the Sacramento police department after two officers shot and killed Stephon Clark, an unarmed black man, in the backyard of his grandmother's house following a foot pursuit on Sunday evening. (Photo by Justin Sullivan/Getty Images)</p>

Demonstrators in Sacramento marched for hours Friday through California's capital and called for justice in the contentious police shooting death of Stephon Clark, an unarmed black man.

During a second day of protests, activists marched about a mile from the city's Tower Bridge to the steps of state Capitol building.

They chanted "Black lives matter" and called out Clark's name. One of the march leaders told people to hold up their cellphones; police have said Clark had an object in his hand, but no weapon was found.

"It's just a cellphone," the man yelled out. "I don't know how the hell it looks like a gun to anybody else."

The shooting incident began Sunday after 9 p.m., when Sacramento officers responded to a report that a man had broken car windows and was hiding in a backyard. They pursued a man identified as Clark, who hopped a fence into his grandmother's property.

Officials said two officers fired when they thought they saw a weapon.

Mayor Darrell Steinberg said the city will wait for the outcome of an investigation.

The city will take a close look at police training and protocols, he said, because the way Clark died was "just plain wrong."

Rally at the Capitol

The crowd Friday stood on the steps outside the Capitol, decrying a police force the protesters called racist. They said there was no reason for police to open fire.

"Cells up, don't shoot," they screamed.

After spending about a half hour at the Capitol, demonstrators took to the streets, occasionally disrupting traffic downtown and at times confronting police officers. Several people, including one member of the clergy, would get the growing crowd moving again as the protesters eventually went to an area where there were several courthouses.

At times, members of the crowd shouted "murderers" at law enforcement officers and yelled, "F--- the police."

Tensions began rising after demonstrators held a vigil Friday night. Some protesters were seen surrounding a police vehicle and climbed on it, CNN affiliate KCRA reported.

Police blocked the road as protesters continued chanting and shouting at the officers for at least an hour, news footage showed.

It's unclear whether there were any arrests.

Protesters the day before had marched into City Hall and onto an interstate highway as the mayor called for calm. They also went to an NBA arena and kept many fans from attending the Kings game against the Atlanta Hawks.

At City Hall, demonstrators called for the arrest of the two officers and demanded to see police Chief Daniel Hahn as they marched into the building.

The protest, which was organized by Black Lives Matter Sacramento, briefly spilled onto Interstate 5 after the group left City Hall.

"A phone is not a gun," protesters chanted.

The mayor on Friday called it a good night.

Protesters twice tried to get on I-5 on Friday night but were blocked by California Highway Patrol officers wearing helmets.

Police: Clark had an object

On Sunday, officers fired 20 times at Clark, hitting him multiple times, police told CNN Sacramento affiliate KOVR. The two officers have since been placed on paid administrative leave amid a use of force investigation.

The body camera videos show the brief encounter between police and Clark, lasting less than a minute, from the moment one of the officers yelled: "Hey, show me your hands. Stop. Stop."

Clark's grandmother said she was inside the house when the shots were fired, and saw her grandson with an iPhone.