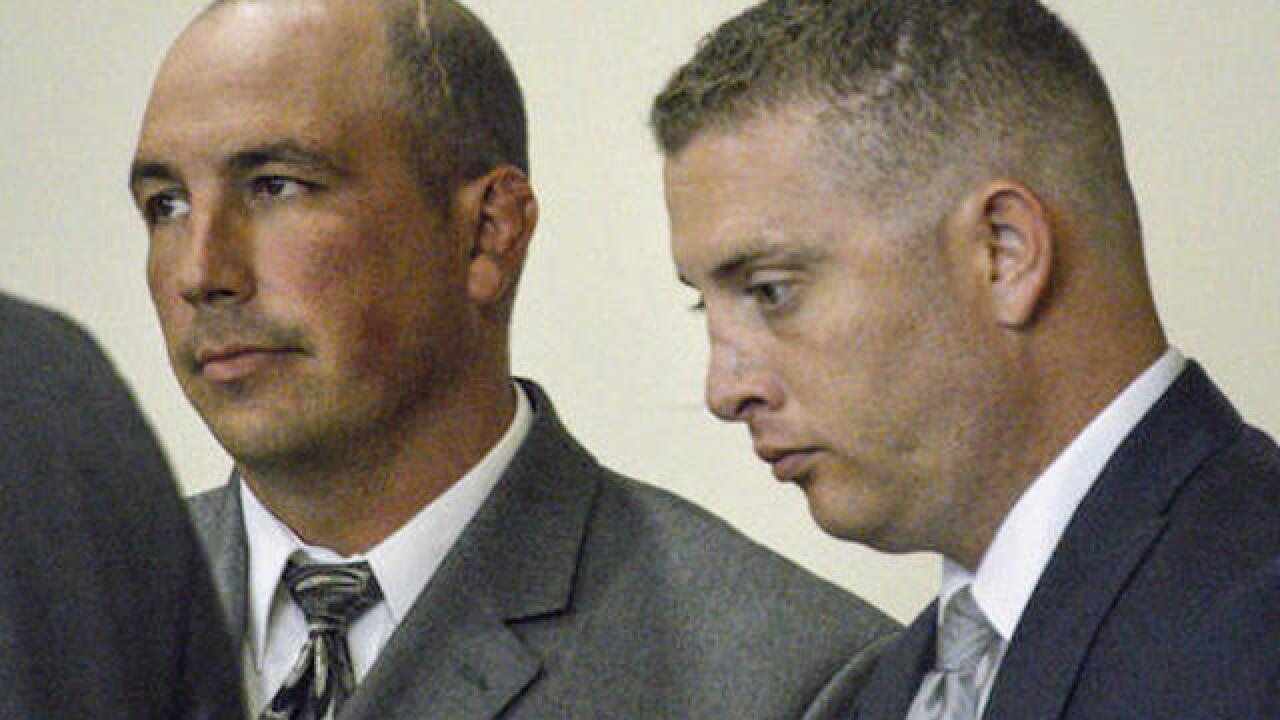 ALBUQUERQUE, N.M. (AP) — The case against two former New Mexico police officers charged in the death of a homeless man ended in a mistrial Tuesday when jurors told the judge they were hopelessly deadlocked on the counts of second-degree murder.

Judge Alisa Hadfield declared the mistrial at the end of the third day of deliberations in the case against Keith Sandy and Dominique Perez. Nine jurors wanted to acquit the men, and three were holding out for a guilty verdict.

Hadfield repeatedly asked the jurors if further deliberations would be fruitful and they responded: "No, your honor."

The trial in Albuquerque marked a rare effort by prosecutors to bring murder charges against officers, coming at a time when police shootings have rocked cities nationwide.

Special Prosecutor Randi McGinn said it would be up to the district attorney in Albuquerque to decide whether to retry the case.

The courtroom was silent as the judge announced the mistrial, and the defendants left court without making a comment. Albuquerque police union members were seen tapping other officers on the shoulder and hugging each other after the news.

Sandy and Perez shot mentally ill, homeless camper James Boyd in 2014 after receiving complaints he was acting erratically on a rocky hillside. They were among 19 officers who swarmed the area with rifles, tactical gear, flash grenades, stun guns and K-9 units, a show of force that the prosecutor questioned throughout the trial.

The defendants, who are no longer on the force, said they opened fire because Boyd had two pocket knives and they believed he posed a deadly threat to a K-9 handler who had lost control of his police service dog and chased the animal, bringing him within 9 to 12 feet of Boyd.

If convicted, Sandy, 41, and Perez, 35, could have face a minimum of 15 years of probation and up to 15 years in prison for second-degree murder.

The mistrial followed 12 days of testimony that included the two former officers taking the witness stand to defend their actions and prosecutors outlining a series of fateful moves by police that escalated the encounter before Boyd's death.

"No matter who you are, nobody should be above the law," McGinn said during closing arguments.

The case played out amid a national debate about police shootings and officers' use of deadly force, including how to interact with mentally ill suspects.

Sandy and Perez were among 77 officers charged with murder or manslaughter in on-duty shooting deaths since 2005, according to data from Philip Stinson, a criminal justice professor at Bowling Green State University in Ohio. Twenty-six of those 77 officers were convicted.

Officers and police experts were called to testify in the Albuquerque trial, with a prosecutor quizzing them on how police should have handled the standoff based on department protocols — starting with two officers with guns drawn responding to a report of Boyd's illegal campsite. He drew the knives after they tried to pat him down, something the prosecutor said is known to agitate people with schizophrenia.

Defense attorneys argued the case was not about how police handled the encounter but whether Sandy and Perez were justified in shooting Boyd, saying they were at the mercy of decisions made by higher-ranking officers and a system that had made them into default mental health professionals.

"What you have here are two officers who are basically captives of the decisions of others of how resources are allocated," said Luis Robles, Perez's attorney.

The defense portrayed Boyd as a dangerous man with a history of violence that included prior assaults on officers. Sandy and Perez said police exhausted all options in negotiating with Boyd and had no other choice but to shoot once he made what they said was a menacing move toward the K-9 handler. Sandy shot Boyd twice in the arms, and Perez shot him in the back.

"These are the tense, uncertain, rapidly evolving circumstances they had to work with," Robles said. "He had to make life-or-death decisions in moments."

The shooting encapsulated the Albuquerque department's troubles in the past several years. The U.S. Justice Department investigated more than 20 deadly police shootings between 2010 and 2014, leading to court-ordered reforms that included a new use-of-force policy and SWAT and crisis intervention training.

Sandy was part of a team responding to the Boyd encounter that came under harsh criticism by the federal investigators over what they found to be a "culture of aggression" in the agency. Known as the Repeat Offenders Project, it was dismantled after the Justice Department investigation.

The agency also was found to have poor policies and training for officers encountering suspects who are mentally ill.