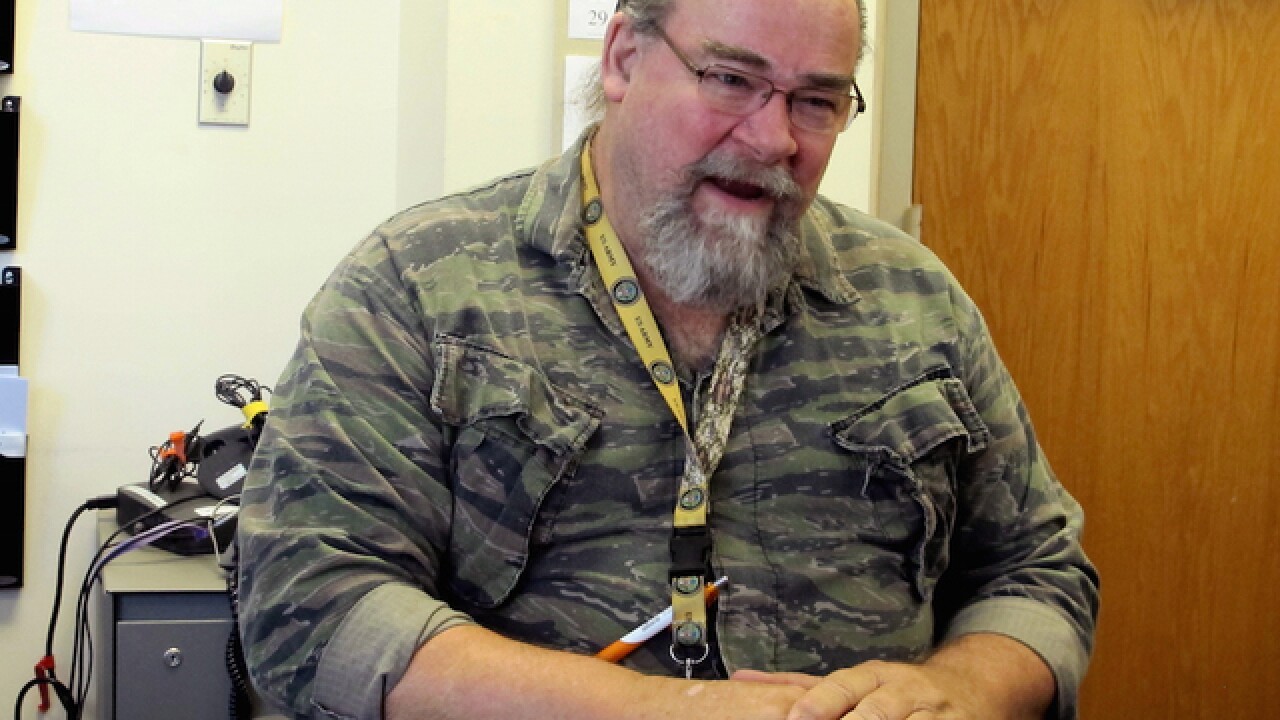 And he doesn't just mean the desert sands of Iraq.

Alligood means homelessness, job loss and the mental anguish of being a long-time military veteran trying to adjust to the trials of a dog-eat-dog, backstabbing civilian world he says nearly ate him alive.

"I need to be around veterans like me. That's where I get my strength, my 'positiveness' from," says the burly former first sergeant who now sports a long, gray braid on his back.

Alligood says he has found a new mission — working in the sprawling Columbia VA hospital and helping as many of his one-time brothers and sisters in arms as he can.

And the VA is looking for more people like Alligood.

In an attempt to respond to the crisis of lengthy patient wait-times and a malfunctioning bureaucracy, VA Secretary Robert McDonald told Congress the agency hired about 14,000 health care workers last year, including 1,300 doctors and 3,600 nurses.

Alligood's background as a military veteran is a plus, she says, and they can always use more like him.

"Veterans know what it takes to serve and what sacrifices they've endured and what some of their challenges have been that have affected their health," the nurse supervisor says.

Alligood said he can relate to his veteran-patients because the route he took from being a VA patient to VA caregiver has been a challenging one.

After leaving the Army, he took a job managing a concrete block plant. The job was eliminated when the plant was sold. Falling deep in debt, Alligood said he took to sleeping in abandoned buildings after losing his car and his home. Life in homeless shelters didn't sit right, either.

"I wasn't in the best of shape, mentally and physically," he said, his rumbling voice catching. "That was the lowest I've ever been."

Alligood said counselors told him about a VA program that put homeless veterans into counseling and back to work. He grabbed the chance to put in 40 hours a week transporting other veterans around the hallways of the sprawling Dorn VA Medical Center in wheelchairs and gurneys.

As he traversed the hospital's maze of corridors, Alligood said he made a point of greeting as many people as he could.

Alligood's banter with other veterans caught nursing administrator Ruth Mustard's ear. She told him the VA would pay for his schooling if he wanted to learn to become a certified nursing assistant and come back to help other veterans.

He went back to school and the Florida native returned to the Dorn VA Medical Center, where he's logged three years in an eldercare unit and six years in the emergency department.

"He has a fabulous rapport," Mustard said.

"He's our jewel," Teal says, beaming at her co-worker.

Alligood said his days in Iraq and Saudi Arabia help him understand veterans who might be dealing with post-traumatic stress disorder. He recounted one veteran he found experiencing a "flashback" in the ER.

"I was able to tell him, 'I got your back, I got your back,'" Alligood said, telling how he'd gotten down on the floor with the ailing veteran, assuring him he'd reached a safe place.